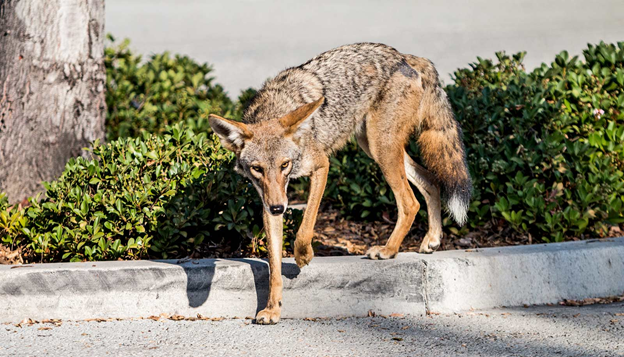 “Coyotes may become more territorial during the breeding and pup-rearing seasons, which in New York run from January through March, increasing the risk for potential conflicts with people and pets,” said Department of Environmental Conservation Commissioner Basil Seggos.

The National Park Service reports that the Eastern coyote is a hybrid between Great Lakes grey wolves and western coyotes that migrated east during the mid-1800s.

The guidance encourages people to not feed coyotes or leave food outside and to teach children to appreciate coyotes from a distance.

“Education and communication are essential,” said Shawn Riley, a professor of wildlife management at Michigan State University. It is entirely  the burden of people to prevent negative human-coyote encounters.

Any human-wildlife conflict should be framed as a tolerance level, not a constant battle, Riley said. The more commonplace wildlife is, the higher people’s tolerance to its presence. Negative interactions between people and animals lead to changes in that tolerance.

The guidance said while present in rural areas and state parks, the Eastern coyote is well adapted to human settlement, habituated to populated suburban and urban communities.

Coyotes are opportunistic carnivores and habitat generalists, able to take advantage of human encroachment into natural areas, Sharon Poessel, a wildlife biologist at the US Geological Survey reported in a 2013 study in the Wildlife Society, an academic journal. The study analyzed the interactions between Denver residents and coyotes.

Generally, coyotes can live close to humans with little threat to people, the study said. However, conflicts, especially with pets, can make people less tolerant of the animal.

The 2013 coyote study found coyote observations and conflicts are highest during December–March and lowest during July–September.

Riley said the guidance was important to prevent conflicts. The burden of wildlife management is to prove humans and nature can coexist by mitigating negative interactions before they occur, he said.

“An ounce of prevention is worth a ton of treatment.”

See the full list of the human-coyote conflict guidance.