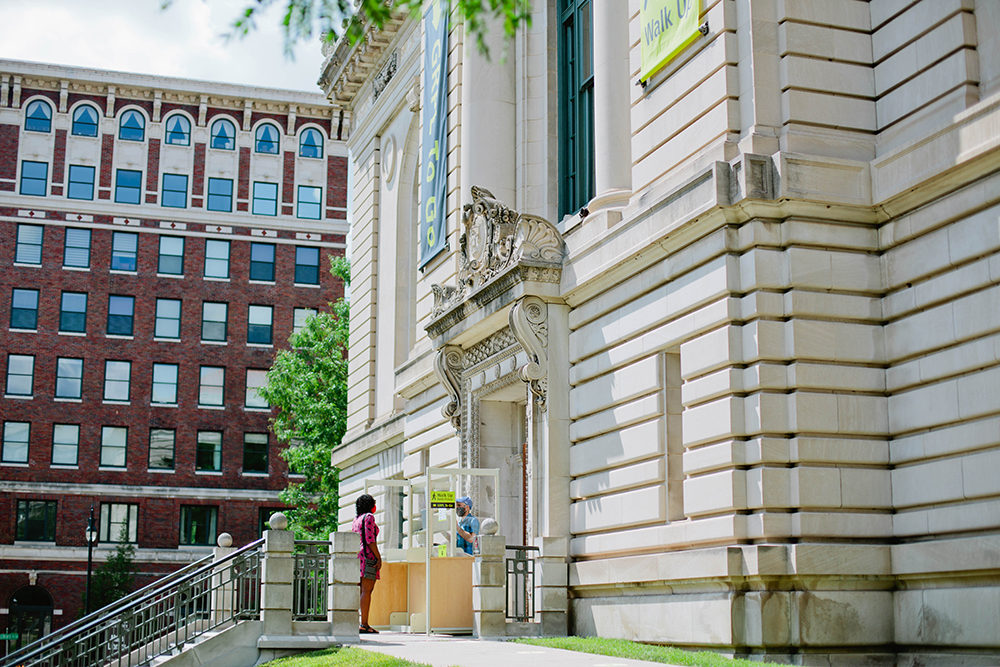 Patrons that walk up to a Grand Rapids Library kiosk are asked to wear masks. Image: Grand Rapids Public Library

COVID-19 forced libraries to close to the public in the spring. Now it’s forcing librarians to innovate to serve the public safely.

The Michigan Library Association, an advocacy and service group, asked the state’s libraries to shut down in mid-March, even before Gov. Gretchen Whitmer ordered them to close, said Debbie Mikula the executive director of the association. It also recommended that library materials be quarantined for at least 96 hours after return.

The most significant impact of the closures is the loss of a community center for people who rely on libraries for internet access, digital literacy training and employment services, Mikula said.

In the coming years there will also be financial impacts of the pandemic, Mikula said. Most libraries are funded through state aid, fines from traffic violations and millages. Though this year’s budgets have not been significantly impacted, Mikula worries that ripples from the pandemic will decrease financial support.

There is less funding generated from traffic fines as people stay home more during the pandemic, she said. And she worries that in the next few years revenue from property taxes that are the bulk of library funding will also decline. 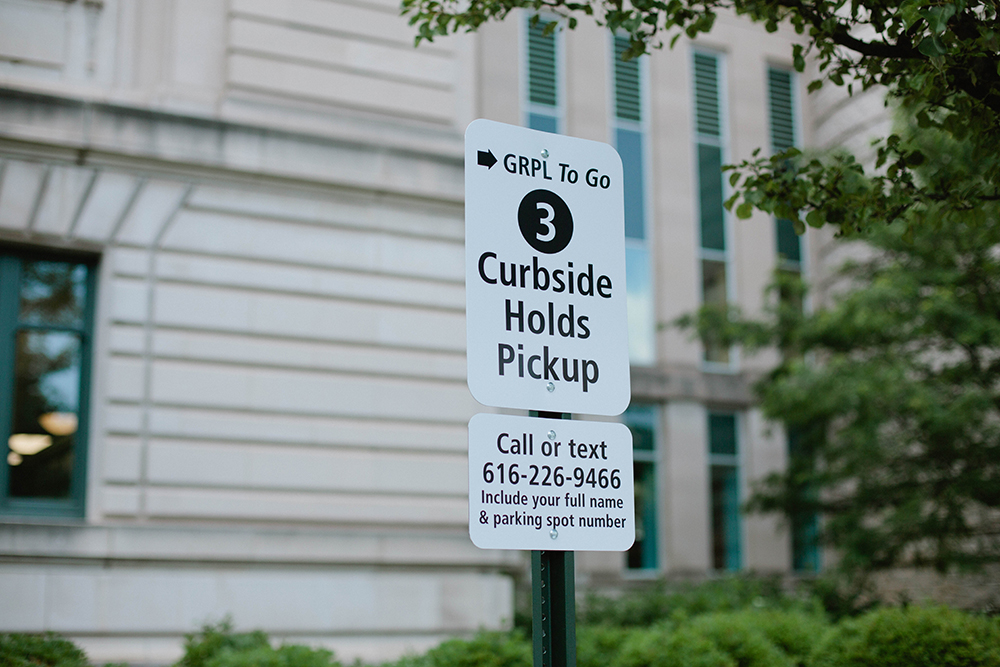 Like many libraries, the Grand Rapids Public Library is only open for curbside pickup. Patrons with a library card can reserve materials online or over the phone and then pick them up with touchless service, said Kristen Krueger-Corrado, the library communications director. Employees place items into a paper bag and put them on a table in front of a parking space for patrons to pick up.

The library also offers walk-up kiosks where patrons wearing a mask can request holds and use printers.

Materials returned to the library are quarantined for five days to ensure worker and patron safety, said Krueger-Corrado. When the library first re-opened, they even put materials into heat tents as an extra cleaning precaution. These tents are typically used to heat treat circulating items in the collection. Their use has since been phased out as checkout and return cycles returned to normal.

Despite these measures, in-person patron visits have decreased while use in the library’s online collections has increased tremendously.

“Like most libraries, we have eBooks, audio books, digital magazines, streaming services for TV programs and movies and music, as well as online research databases,” Krueger-Corrado said. “And we’ve seen those skyrocket since we’ve had to go into quarantine.”

The Detroit Public Library is also slowly re-opening after closing all of its branches.

Its mobile library was initially closed for safety. Now it’s back in operation, but the experience is different from past years, said the library’s Public Relations Specialist Katie Dowgiewicz. No patrons are allowed inside the vehicle, but it offers free WiFi, book giveaways and up to date information on the re-opening of the main branches.

Elsewhere, the East Lansing Public Library expanded its materials by mail program to everyone with a library card.

People can reserve materials and have them shipped directly to their home. The option was previously only available to those who couldn’t physically get to the library, said Brice Bush the library’s assistant director.

All three libraries are preparing to allow patrons to enter their buildings but have no set dates for when that happens.

The libraries follow strict federal guidelines to balance re-opening with the safety of everyone involved, Mikula said. 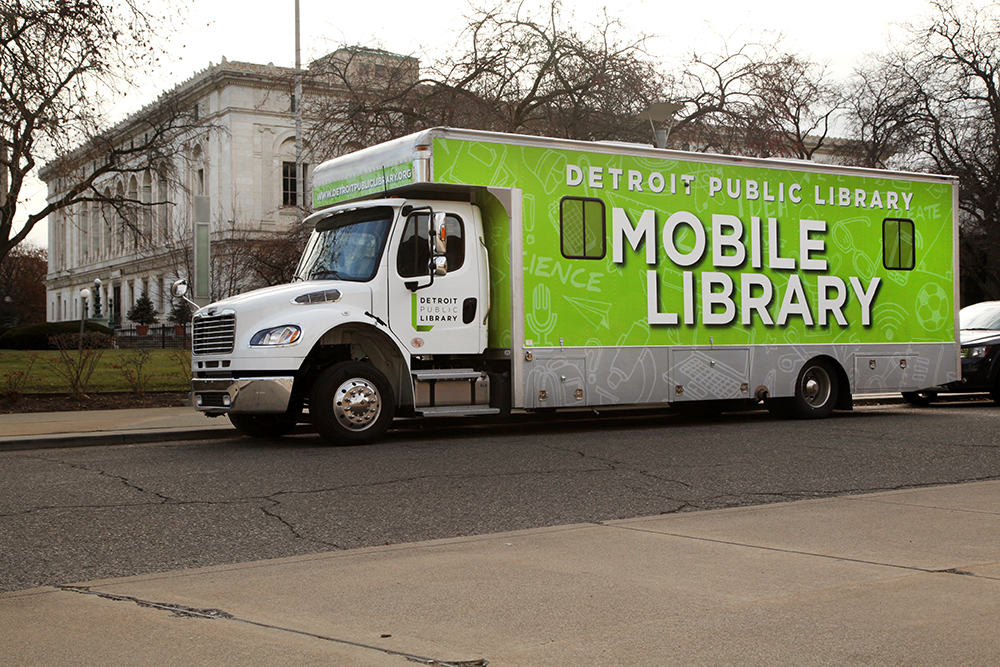 The East Lansing Library plans to limit those in the library to 40 at a time when it reopens, Bush said. Visits will be limited to 30 minutes or less.

“We’re calling it grab and go service,” Bush said. “We will be welcoming people in, and the main floor of the library will be open where all the stacks of books are. We want people to browse but we’re asking them to get what they’re looking for and check their items out and be on their way.”

Although library officials are unsure when they will welcome patrons back in the buildings, their virtual use has ramped up across the board. All three libraries expanded digital programming and moved summer events online, leading to increased use of websites, digital collections and social media.

Those changes could be lasting.

Libraries wouldn’t have had the time or resources to transform the way they provide services without the shutdown, Krueger-Corrado said.

The next step is looking into ways the library can safely serve those who do not have access to technology or the internet, she said. Library officials are looking into options like an internet hotspot lending program, or streaming movies in a park where attendees can socially distance.

The full phased re-opening plans for all three libraries are available on their websites.

This story was updated Sept. 6, 2020, to correct the curb side pick up process and to properly identify which books are heat treated in tents.