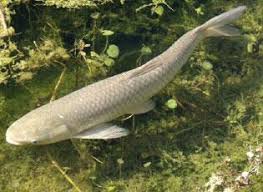 The first invasive grass carp capable of reproducing in Michigan was caught this spring during an annual fish survey by the Department of Natural Resources (DNR).

The fish was in an area of the Tittabawassee River running through Midland County. The Tittabawassee flows into Saginaw Bay, which is part of Lake Huron. Its watershed includes parts of Clare, Mecosta and Montcalm counties.

Grass carp, which can grow to almost 5 feet long, have been prohibited in the state for nearly 50 years, according to the DNR.

Since 1989, 13 grass carp have been captured in Lake Huron, but all were sterile.

Randall Claramunt, the fisheries and Lake Huron basin coordinator for the DNR, said past carp discoveries were likely the result of captive fish escapes.

“Some states allow sterile carp in aquaculture facilities, but Michigan does not,” Claramunt said. “There is a history of sterile carp, especially grass carp, having been used to control aquatic systems, and early indicators were that sterile grass carp were escaping from areas where they were planted.”

Lab testing of the most recent discovery determined that it was able to reproduce.

A growing number of grass carp could be harmful to Great Lakes fish and aquatic animals, according to Bryan Burroughs, the executive director of Michigan Trout Unlimited.

“Grass carp can cause issues with how they feed and root around,” Burroughs said. “They can disturb habitats physically, as well as competing with other types of fish, and in some cases they’re changing habitats in a way that we don’t see naturally.”

Grass carp could also diminish food sources for other fish, according to Ian Fitzgerald, a policy and special events assistant for the Michigan United Conservation Clubs.

“Grass carp can eat up to three times their body weight when they’re first growing, and even when they’re fully grown they eat huge amounts daily,” Fitzgerald said. “At that point they can strip the vegetation completely out of a pond and wipe out both the food and habitats of other fish.”

According to the U.S. Fish and Wildlife Service, grass carp can grow up to 59 inches and 99 pounds, and they eat up to 40% of their body weight per day.

Fitzgerald said problems caused by other types of carp are spotlighted, but the potential negative impact of grass carp shouldn’t be underestimated.

“Grass carp are kind of like the little brother of the invasive species, and they’re forgotten about when you see silver carp jumping out of the water,” Fitzgerald said. “But like a little brother, grass carp can still wreak havoc.

“The highlight is still on bighead and silver carp, but if a grass carp came from Lake Huron and is traveling, then that’s concerning, and they’re just going to continue to become established,” he said.

After the spring discovery on the Tittabawassee River, the DNR launched a response action using electrofishing boats to search for additional carp, Claramunt said.

“The typical response is to invoke several actions to try to determine the level of risk, including the number of carp that might be in the system and if there’s evidence of reproduction,” Claramunt said.

“For grass carp, that wouldn’t occur until late May or early June, so our response at that point was to see if there were any other adult carp in the area,” he said.

No other grass carp were captured or observed.

Claramunt said the DNR plans additional surveys when the 2020 season resumes as normal.

“We were able to get one day of sampling in, but we had to reduce and postpone our sampling because of COVID concerns, including the health and safety of our crew,” Claramunt said.

“Our response would have called for three boats with electrofishing techniques that would require a minimum of three people in a small area,” he said.

According to Burroughs, a quick response is crucial to keep invasive carp from becoming established.

“When you’re dealing with the first handful of an invasive species, that is your best shot at eliminating that population,” Burroughs said. “Even a few fish in the right conditions can have thousands of offspring.”

Claramunt said the type of response depends on when the DNR is able to resume operations.

“If we’re able to resume in June as we get closer to spawning time, we’ll actually have a better chance of detecting the fish,” Claramunt said. “The later we go into the season, the less ability we’re going to have to find them, which just means we’re going to have to change our strategy and start looking for different reproductive stages of the carp,” he said.

The response will also include testing the ear bones of the captured carp to determine if it originated in aquaculture or in the Great Lakes, Claramunt said.

“This will be important because there’s a small population in Lake Erie and its tributaries that is reproducing successfully,” Claramunt said. “If the carp is from the wild, that will tell us that one of these sources is migrating to other systems.

“If it’s from the wild, we’ll begin a second analysis to determine which population it came from,” he said. “If it’s not one of those, it becomes even more concerning because there might be a population that we don’t know about.”