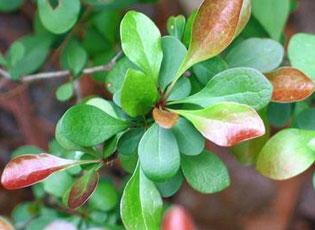 Japanese Barberry is a popular choice for gardens. Go Beyond Beauty is trying to end that. Image: U.S. Department of Agriculture

A northwest Michigan program to get nurseries and landscapers to avoid using invasive plants is expanding across Michigan.

The Traverse City-based Go Beyond Beauty program has received funding through two projects from the Michigan Invasive Species Grant Program to tackle such plants as Japanese Barberry, baby’s breath and blue lyme grass that are spread by people putting them in gardens.

The program is operated by the Northwest Invasive Species Network which covers Grand Traverse, Leelanau, Benzie and Manistee counties. When the it expands, different environmental groups across the state will act as hubs to work with businesses in their area, said Emily Cook, the network’s outreach specialist.

Advocates say the program is key to preserving Michigan’s diversity of native plants.

Plants need pollinators like bees to move pollen from male plants to female ones to reproduce, Cook said. Invasive plants take the attention of pollinators, which can hurt native species.

“That’s what we’re really trying to work to manage, keeping the biodiversity of these areas intact,” Cook said.

“As the conversation about native plants and invasive species grows, the demand for certain plants is shifting,” Cook said.

The Invasive Species Network promotes businesses that participate in Go Beyond Beauty. The organization spoke to almost 4,000 people in presentations where they listed businesses participating in the program, Cook said.

However, most businesses join not for the business perks but because they want to be a part of the solution, Cook said.

“[When] I’m first meeting with a client, I feel a lot more confident saying I’m backed by this Go Beyond Beauty Program,” Dompierre said.

Dompierre said when clients ask him to plant invasive species for them, he explains why they don’t use them and recommends an alternative.

Michigan needs to better regulate invasive plants, Cook said. Other Great Lakes states such as Wisconsin, Indiana and Ohio do a better job.

“Michigan, while I love this state, we’re a little behind on the plants that we regulate,” Cook said.

The grant is for three years, but there is a chance for it to be extended.

“Our goal is for it to be a long term, statewide thing,” Cook said.

The first year of expansion is expected to be mostly planning. The Invasive Species Network needs to hire a new employee to help with the expansion and decide which environmental groups can act as hubs, Cook said.

Results of the expansion will be evident in early 2021, Cook said.