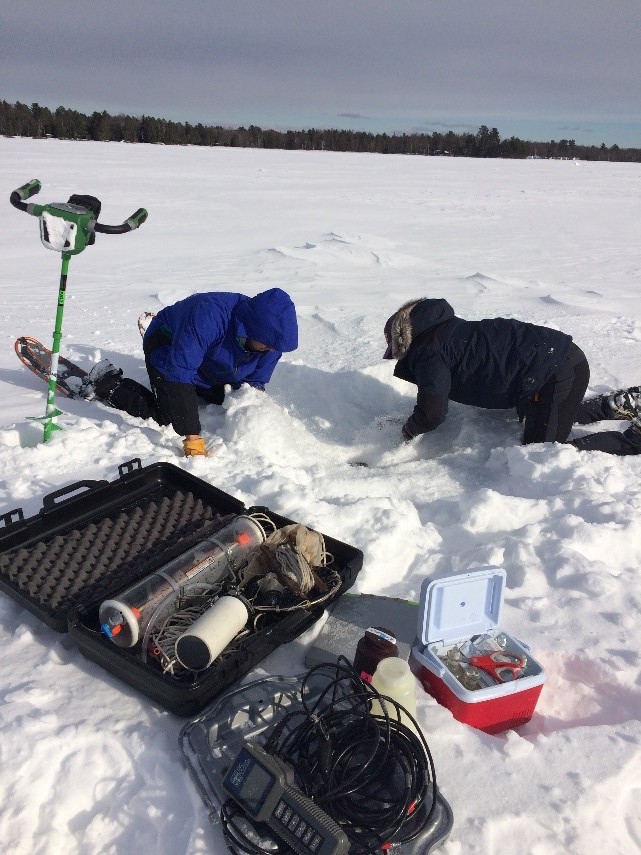 Would you rather take a motorboat or a kayak to cross a small lake?

No matter what you choose, you will contribute to the lake’s underwater soundscape.

Small freshwater lakes in Minnesota have a relatively cleaner soundscape, which means sounds produced by human activity are few there and have a low impact on aquatic animals, according to a recent study.

University of Minnesota Duluth researchers used underwater microphones to collect sounds from 15 Minnesota lakes smaller than four square miles. Their goal was to understand baseline sound levels in these ecologically significant freshwater lakes to determine the consequences of noise.

“In Minnesota’s small lakes, we have quite pristine soundscapes right now,” said Rosalyn Putland, the author of the study. “The sounds we recorded have low intensities and low volumes.”

Another thing they found is that the lakes are quieter in winter than in summer.

“We believe it’s the ice on the surface of the lake that is making it a much quieter environment for underwater animals,” Putland said. “It’s like a buffer, protecting the animals below from any sounds above.”

And the sound levels increase with people, Putland said.

“For example, when people drive a snowmobile on the ice or use an ice auger to do ice fishing, that would make vibrations on the ice and create sounds below,” Putland said. “In summer, the cases would be boat activity, water skiing and jet skis.”

“They can protect areas during certain times of a year, like during the breeding seasons or when animals are coming out of hibernation,” Putland said. “That’s why having these baseline recordings and understanding what sounds are in an environment can be used by the policymakers.”

Human activity could harm the behavior of certain aquatic animals, Putland said. High levels of sound damage our eardrums. Fish can have the same problem. And animals that are using sound to communicate might change their behavior.

In the most extreme cases, anthropogenic sounds can even kill aquatic life, said Rodney Rountree, an expert in fish sounds and an adjunct assistant professor at University of Massachusetts at Amherst.

Pile driving, which is used to install foundation supports for bridges, can generate tremendous noise, Roundtree said. “And in case of the large pile drives, they can blow fish up from the inside. What happens is the gas bladder inside the fish implodes because of the heavy shockwave of the sound.”

But there are solutions for these problems, Rountree said. For example, people used a new technology called bubble nets to protect the underwater life during the construction of the Tappan Zee Bridge in New York. They put a stream of intense air bubbles in a periphery around each pile and that form an acoustic barrier to help block the noise.

“We are just starting to look at that in freshwater habitats,” Rountree said. “There are more studies done in marine habitats. Even there, it is still in the early stages of science.”

More needs to be done to study the freshwater soundscape better, Rountree said.

Last year, he published a paper in Fisheries to call for more studies of freshwater fish sounds. Only 87 species have been reported to produce sounds in North America and Europe over the last 200 years, accounting for 5% of the known freshwater fish diversity, the paper reported.

“We can’t understand freshwater soundscape if we don’t know the sounds of the fish,” Rountree said.

The study brings not only significant knowledge but also a joyful experience.

“It’s enjoyable fieldwork,” Putland said. “It’s great to get out of the office, out into nature and get to do some cool fieldwork. We were going out walking on the ice, going canoeing. Who wouldn’t want to do that for their day to day job?”

2 thoughts on “What do small Minnesota lakes sound like?”