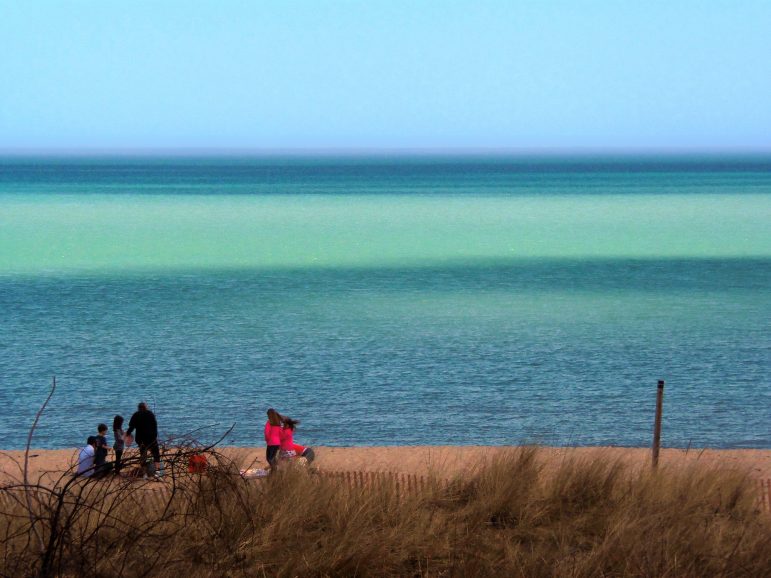 Exposure to the Great Lakes can benefit your mental health. Credit: Keith Cooper

A weekend spent on one of the Great Lakes is undeniably relaxing.

New research confirms that living near one is good for your mental health. But the opposite could be true of small, inland lakes.

“It was exciting to see this positive relationship with the Great Lakes,” said Ashton Shortridge, a professor of geography at Michigan State University and one of the study’s authors. The inland lakes findings were a little surprising.

The study, published recently in PLOS One, shows that people living away from the Great Lakes are hospitalized for anxiety and mood disorders slightly more frequently than those who live nearer to them.  If one out of every 100,000 Michiganders were hospitalized for a mood disorder or anxiety, that number would rise to 1.3 out of every 100,000 people for those living 100 kilometers (about 62 miles) or more from a Great Lake.

“We were a little surprised that the signal from inland lakes was mixed,” Shortridge said.

The mental health benefits of green and blue spaces are thought to come via two pathways, Shortridge said. One is the therapeutic effect of seeing, hearing, touching and smelling lakes and the ocean. The other is that these spaces encourage recreation and physical activity, proven supporters of mental health. This is well supported by research.

That’s why the increased rate of hospitalization for people living near smaller inland lakes was unexpected, Shortridge said. The reasons remain unknown.

“Could it be that these people who are being hospitalized maybe don’t, for whatever reason, have particularly good access to the lake?” he said.

Access to these smaller inland lakes can be restricted to members of a property owners associations or exclusive in some other way, the study says.

“What we can’t see in the study is how much contact these patients actually have with blue water,” Shortridge said. “Just because you live in a zip code that has a lake, doesn’t actually mean that you even see that lake on a regular basis.”

Access to healthcare, determined in part by wealth and community support, could be another factor affecting hospitalization rates.

The study shows that the Great Lakes benefit mental health, but not why, Shortridge said. It doesn’t explore other important factors like the severity of each mental health episode, the outcome of the hospital stay or access to lakes and healthcare. These are avenues for future research, he said.

“We have a great asset here in the upper Midwest in the Great Lakes,” Shortridge said. “To this point their effect on health is still very poorly understood.”

Shortridge hopes this study will spark more research into the mental health benefits offered by the Great Lakes. The team has made the data it used in the study available to the public.

“I think this is a very first level study, but I’m excited to see how we can learn more about how the Great Lakes promote health in many ways,” Shortridge said.

One thought on “Great Lakes make for great moods”