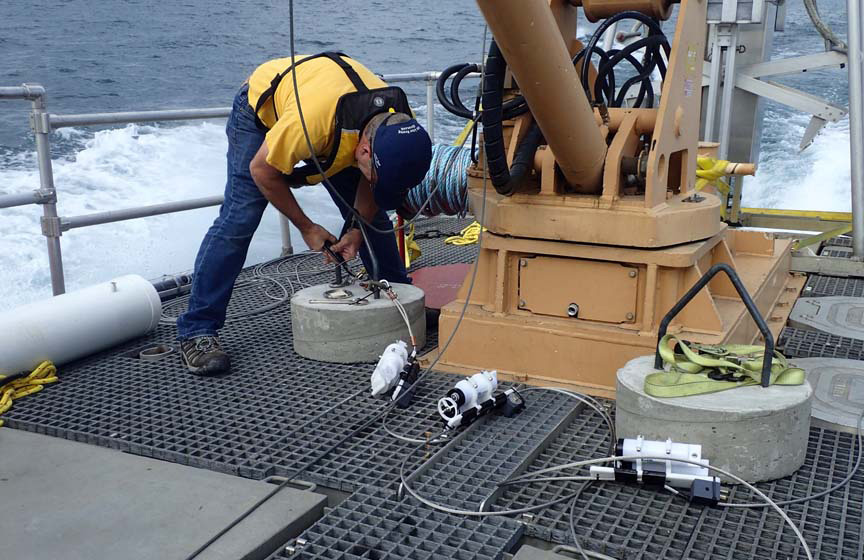 In the summer of 2014, Toledo, Ohio, instituted a days-long water consumption ban for its approximately 500,000 customers in northwest Ohio. A bloom of microcystis algae in Lake Erie’s western basin, near the city’s water intake station, led to the ban.

Microcystis, sometimes referred to as a blue-green algae, is a type of cyanobacteria capable of producing toxins that are potentially harmful to humans and animals from consumption of contaminated water that contains such toxins.

Such harmful blooms are different from non-toxic nuisance algal blooms.

The 2014 algal bloom event in Lake Erie is part of a larger problem affecting bodies of water across the globe that may be driven in part by environmental changes brought about by climate change.

The preconditions necessary for algal blooms, whether harmful or nuisance, are complex and include rising water temperatures and introduction of invasive species such as zebra and quagga mussels.

The most important factor for harmful blooms is excess nutrients essential for algal growth, especially nitrogen and phosphorus.

Climate change models predict increased runoff into rivers as a result of changes in precipitation — more intense rainstorms — in the Great Lakes Basin.

Most of these nutrients arrive in Lake Erie through runoff from agricultural land in the Maumee River watershed, according to Steven Ruberg, a group leader in marine instrumentation at the National Oceanic and Atmospheric Administration’s Great Lakes Environmental Research Laboratory (GLERL) in Ann Arbor, Michigan. 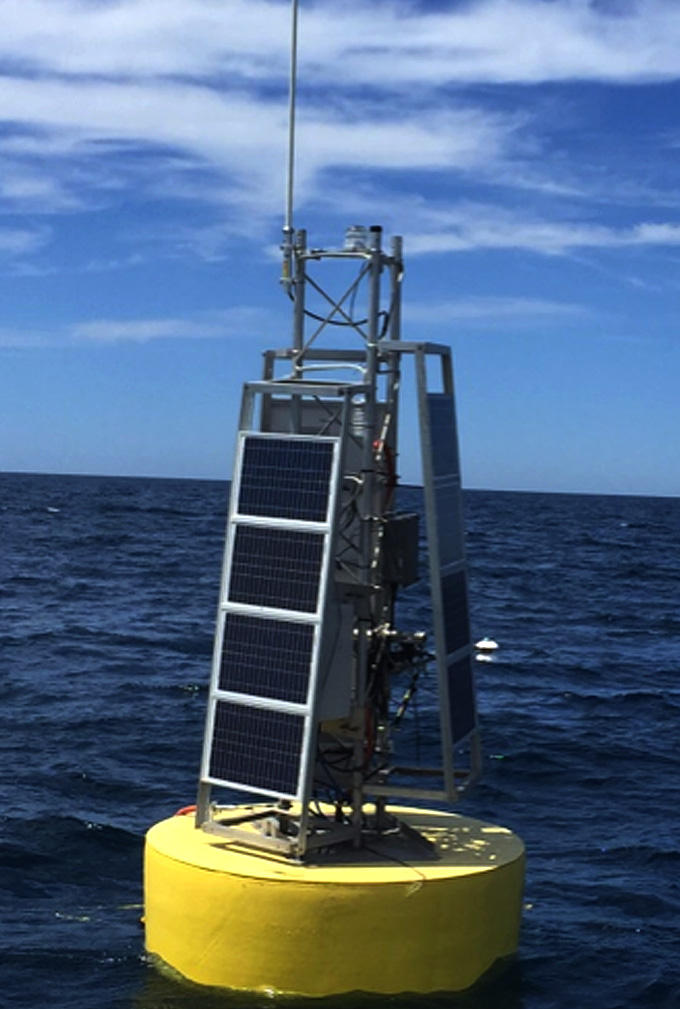 GLERL scientists follow yearly blooms using techniques including satellite aerial monitoring that detect pigments in the algae. “When we do a bloom forecast, the strongest correlation on the yearly basis on bloom aerial extent is with the Maumee River,” Ruberg said.

Ruberg and his GLERL colleagues research techniques to monitor lake phosphorus levels in an effort to predict cyanobacterial blooms and related toxin levels.

The team uses a number of systems to monitor nutrient loading and phosphorus and nitrogen levels in Lake Erie.

Similar to the early symptoms of a disease in a patient, the solutions these scientists pursue allow them to alert Lake Erie communities when water systems may be threatened.

GLERL’s methods currently in use and under development include:

There’s a lot of information gathered from these technologies, and it’s important that scientists and coastal community leaders can trust the information, according to Ruberg. Therefore, scientists compare the data collected daily from buoys and environmental sample processors to measurements of the same information collected in weekly water samples from a ship that samples Lake Erie directly.

The data has confirmed the Maumee River as the primary source of nutrient loading into Lake Erie, Ruberg said.

Monitors placed around the lake’s western basin allowed the scientists to identify a second important indirect source of nutrients contributing to algae blooms: the wind.

Winds blowing across the lake can churn up water and sediments in the lake’s shallows, leading to suspension or lifting of sediments from the bottom.

Algae cannot access nutrients being held in the sediments unless these sediments move up in the water.

Ruberg said, “We don’t see strong correlation with wind events (and algal blooms) except in the nearshore areas where satellites can’t pick it up as readily. The stronger the wind event, the further out it impacts the lake. A large area of the western basin can be re-suspended because it’s so shallow.”

The differences in response to nutrients and increases in algae between nearshore and the central deeper basin provide an added layer of complexity to the bloom problem.

Mark Rowe, a scientist at the Cooperative Institute for Great Lakes Research based at the University of Michigan, is interested in understanding how the movement of water within the lakes affects Great Lakes biology and ecology.

“One of the topics of current interest in Great Lakes management is in nearshore water quality,” he said. “Now with more detailed hydrodynamic models, we’re able to model movement of nutrients from the nearshore to offshore regions,” Rowe said. 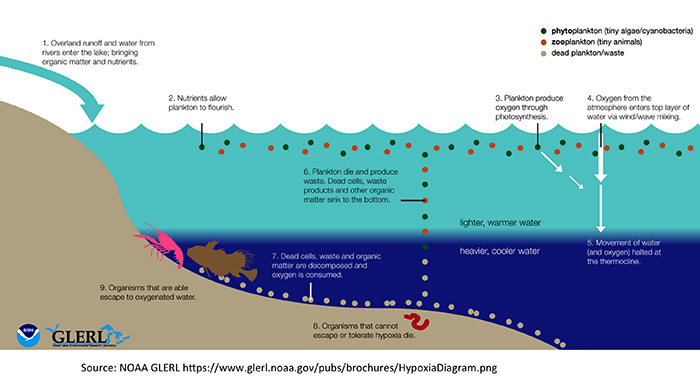 Factors contributing to hypoxia in deep lakes and oceans in response to nutrient Image: Mark Rowe, University of Michigan

If you’ve ever been swimming in the Great Lakes and noticed a sudden change from tolerable water temperatures near the surface to much colder temperatures as you swam deeper, that border between warm surface and cold bottom waters is referred to as the thermocline.

The thermocline does more than take your breath away—it also marks the border between two distinct ecosystems.

The warmer, less dense surface water is warmed by the sun’s energy and is high in oxygen. It’s separated from the deeper, colder and denser water nearer the bottom that contains less oxygen needed for life in the deep waters.

The thermocline acts as a barrier, preventing mixing of the surface and deep waters. The thermocline keeps oxygen lower in the deepest regions of the lakes while surface waters are well-oxygenated.

Rowe’s team placed sensors in Lake Erie to monitor oxygen levels in deep offshore waters. They were trying to relate changes in oxygen levels to nutrients coming into the lake and cyanobacteria blooms. 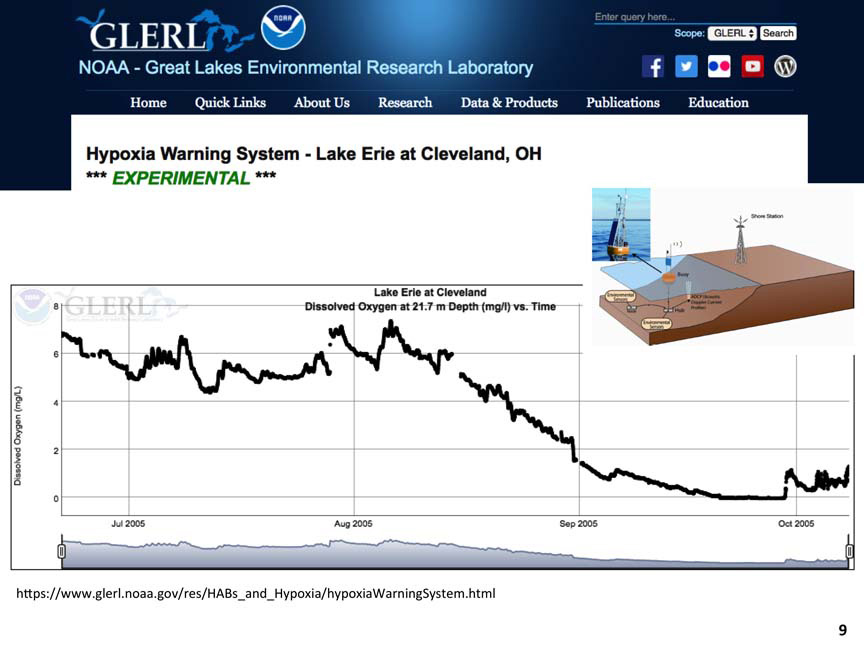 Results of real-time hypoxia monitoring for the city of Cleveland, Ohio in 2006. Image: Mark Rowe, University of Michigan

Hypoxia can harm water quality for human consumption, and alter the chemistry within these lake zones, Rowe said.

“The water becomes more acidic and corrosive to water systems at treatment plants,” he said.

Corrosion of pipes can expose people to lead and copper present in the pipes that deliver water to their homes.

Lake Erie is the smallest, shallowest and warmest of the lakes, providing an environment conducive to algal blooms, and scientists studying the lake and community water managers are concerned that similar seasonal bloom problems may develop in the Upper Great Lakes.

GLERL’s Ruberg said, “It already is a problem in Green Bay. It’s a problem in the Bay of Quinte in Ontario and Lake St. Clair in Canadian waters through the Thames River, which is heavily sedimented through agriculture. We already have seen microcystis in Saginaw Bay, and we already have a program there.”

The next step to address this issue is to develop a seasonal program based on what scientists have learned by studying Lake Erie, Ruberg said.

Researchers have learned much about how and why algal blooms have reemerged as a problem in Lake Erie decades after the lake was pronounced dead from similar blooms in the 1960s and 1970s.

The United States and Canada have pledged to cut the influx of phosphorous into Lake Erie by 40 percent, but scientists don’t know what impact that would have on the health of Lake Erie or the rest of the Great Lakes, said Henry Vanderploeg, a senior ecologist at GLERL. 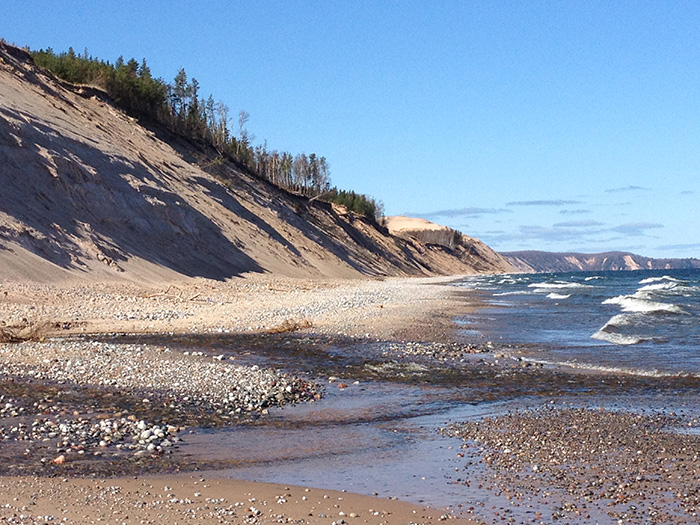 Vanderploeg warned against being too quick to draw conclusions about the impact on the Upper Great Lakes from how Lake Erie responds to proposed cuts in phosphorus.

There’s no single solution to the problem of algal blooms in Lake Erie and the Upper Great Lakes, particularly with the challenges presented by climate change, Vanderploeg said.

“We’re running an experiment without really knowing what might happen in Lake Erie, let alone much larger lakes such as Lake Michigan,” he said.

2 thoughts on “Monitoring algal blooms in the Great Lakes Basin”