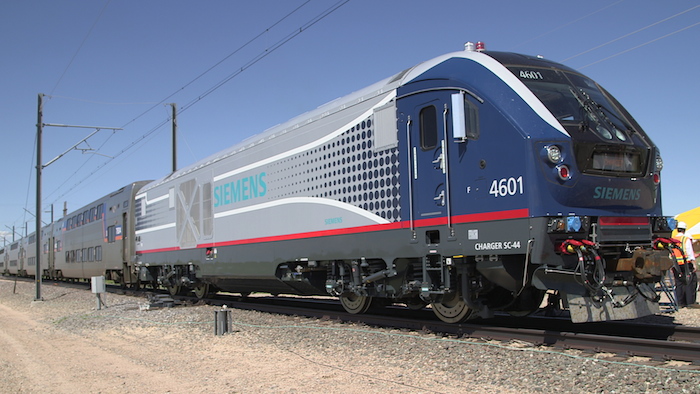 The Siemens Charger, which is coming to the Great Lakes region, undergoes testing in Pueblo, Colorado, in 2016. Image: Siemens USA

Greener trains are coming to the Great Lakes region.

Technically, they’re locomotives. That’s the part of the train that does the pushing or the pulling. The Siemens Chargers, which are due to arrive by fall, meet the Environmental Protection Agency’s “tier four” standards.

Tier four is the agency’s highest standard for emissions.

Besides leaving a smaller carbon footprint, the locomotives can get up to speed faster than older models. A 94-mile section of track between Porter, Indiana, and Kalamazoo, Michigan, for example, could see trains flying through at 110 miles per hour without a long acceleration period.

The locomotives will spit out less of the junk we don’t want in our air – stuff like nitrogen oxides, hydrocarbons, carbon monoxide and other chemicals and particulates.

“It’s the most environmentally friendly locomotive out there,” said Steve Vagnozzi, chair of the Michigan Association of Railroad Passengers.

The release of the Siemens Chargers “will be a significant milestone in Amtrak service improvements to the region,” said Marc Magliar of Amtrak’s government affairs and corporate communications unit.

Several routes in the region will get the new locomotives, with Chicago serving as the hub.

All of the routes are state-sponsored routes, meaning they’re less than 750 miles, Magliari said. The states are buying the locomotives with federal stimulus dollars authorized during the recession. Amtrak will operate them.

The new locomotives are being built in Sacramento, California, Magliari said. When they’re ready, Amtrak will celebrate their delivery by throwing some events.

And how do you get a locomotive from Sacramento to the Midwest? By air, by sea or by truck? Nah!

By rail, of course.

One thought on “Green, fast locomotives coming to region”