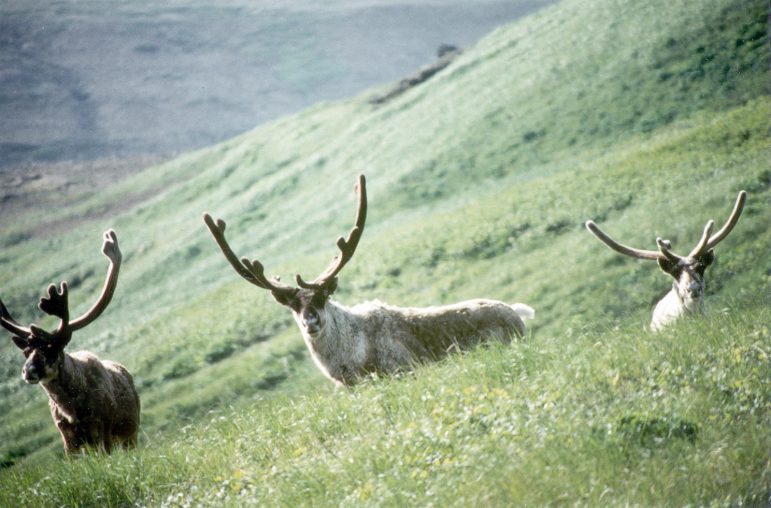 U.S. and Canadian researchers discovered “drive lanes” that channeled unwitting caribou into the clutches of hidden hunters. Image: U.S. Department of the Interior

Deep below the chill waters of Lake Huron, scientists have found long-submerged physical evidence that prehistoric peoples systematically and strategically hunted caribou thousands of years ago.

“Caribou have a thing for linear features. They like following lines,” said scientific researcher Lisa Sonnenburg of the environmental consulting firm Stantec Consulting Inc. in Hamilton, Ontario. “Line stones up in a row and caribou will follow them. It’s something about how their brains work.”

Today, scientists and shoreline property owners pay close attention to annual fluctuations of Great Lakes water levels. But water levels between 8,350 and 9,000 years ago were unusually low, according to a newly published study by Sonnenburg and John O’Shea, the curator of Great Lakes archaeology at the University of Michigan’s Museum of Anthropological Archaeology in Ann Arbor.

The study appeared in the journal Geoarchaeology.

The discoveries came along the limestone-capped Alpena-Amberley Ridge — essentially a land bridge — that runs between Alpena and Point Clark, Ontario, 50 to 164 feet below the surface of the lake.

There, hunters built the blinds and driving lanes during the last of several post-Ice Age times when the land subsided and rose — a process scientists call isostatic rebound — after the glaciers melted, Sonnenburg said. Lake Huron was completely cut off from Georgian Bay and Lake Michigan.

Scientific evidence illustrates how different the climate was when prehistoric hunters preyed and camped along the Alpena-Amberley Ridge. And “some of the most important questions in human prehistory require the investigations of submerged landscapes,” the study said.

At the time, the microclimate there was similar to current subarctic environments where indigenous people still hunt for caribou.

The land was covered with hardy grasses and mosses and coniferous trees, and the “more subarctic-like environment” along the ridge meant trees didn’t grow as large as they did in coastal areas of Lake Huron, the study said. “Pollen and microfossils found in the sediment suggest that ponds and small streams provided water for people and caribou, while wetlands fringed the shorelines of inland ponds and lakes.”

Coupled with other environmental data, scientists will use the latest findings to search for additional archaeological sites, enhance computer simulations of caribou movements and “predict the locations of additional cultural features such as campsites, meat caches and stone-tool production areas,” the study said.

“The combination of topography and environment was very influential in the placement of hunting structures, which in turn was based on the behavior of caribou, observed over the course of millennia,” the study said. “Documented hunting structures cluster in higher-elevation areas that created natural lookout points for hunters who tracked the caribou herds.”

On a human level, Sonnenburg said, the research matters to many indigenous peoples. “Anything they can learn about their own people going back as far as possible is important from a cultural perspective.”

And for society at large, she says the findings are a reminder that “climate has never been really stable” and that prehistoric people in North America “were very good at adapting, and survived and thrived.”

Today’s changing climate and other environmental forces may threaten future archaeological research in the Great Lakes region, she warned.

For example, dropping water levels can expose shoreline archaeological sites to erosion and leave them vulnerable to looting, Sonnenburg said.

And “invasive species are the most potentially problematic in terms of the work we’re doing,” she said. To illustrate, the study noted that researchers found many parts of the Alpena-Amberley Ridge encrusted with quagga mussels. Inches-thick layers of mussel obscured shallow depressions and made identification of “small cultural material such as flakes or stone tools nearly impossible.”

The project also highlighted the reality that much of the significant evidence of human adaptation to climate change isn’t found on land, the study said. “These now-submerged landscapes are of tremendous archaeological importance, as they contain well-preserved evidence of early human migration, settlement patterns and subsistence strategies.”