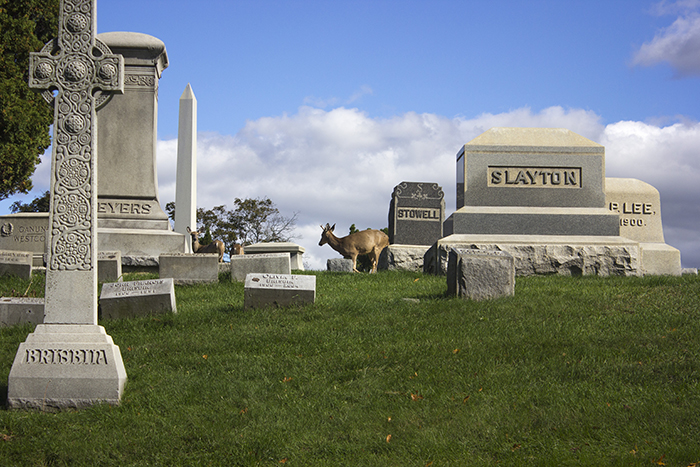 Four white-tailed deer graze atop a rise, oblivious to Jay P. Lee and G.W. Palen, and other folks named Stowell and Whitehead and Slayton and Potter interred there. It’s afternoon – an uncommon feeding time for deer that usually prefer dawn and dusk – on a fall day at Mount Hope Cemetery in Lansing, Michigan.

The deer browse amongst the graves, apparently unperturbed by the writer, photographer and ecologist walking at the foot of their hill, discussing varieties of lichen on tombstones, the food value of non-native honeysuckle for wildlife and the evils of invasive buckthorn. 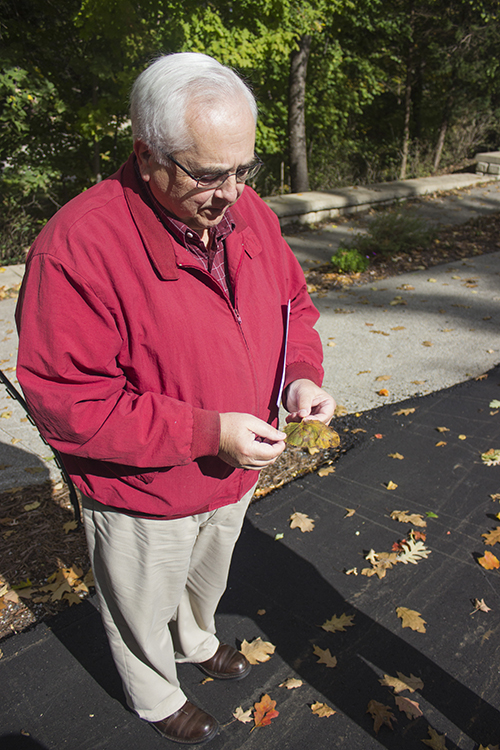 The ecologist is Brian Klatt, director of the Michigan Natural Features Inventory, and we’re exploring the cemetery, which was farmland until 1873. It sits at the intersection of two busy roads about three miles from the classic white-dome state Capitol and backs into the floodplain of Sycamore Creek. The best-known of those buried here is Ransom Olds, founder of the Oldsmobile car company.

While much of the 82 acres is mown and planted with non-native grasses, the hilly terrain still contains high-quality remnants of native habitat. Snakes feed and overwinter in the floodplain but hunt on the sunnier higher ground, Klatt says.

Owls and other birds shelter from winter storms in the white cedars. Maples produce huge amounts of seeds. Black oak produce acorns, or “mast,” a staple for squirrels, deer, and other urban wildlife.

Klatt also points out an ash, that “disappearing guy,” a species beleaguered by the emerald ash borer that’s wiped out millions of trees in the Great Lakes Basin.

Mount Hope represents the landscaped urban cemetery movement that started in the 1830s where the intent was not to protect biodiversity but to provide park-type areas where the living could commune with a quasi-natural environment.

It was a change in approach to burying the dead. As Klatt explains, “For hundreds of years, you’d have a little fenced plot next to a church.” But then in the mid-19th century, a lot of interest in plants developed in an era when landscape architecture “was coming of age,” and when cemeteries “could be used for relaxation and recreation.” 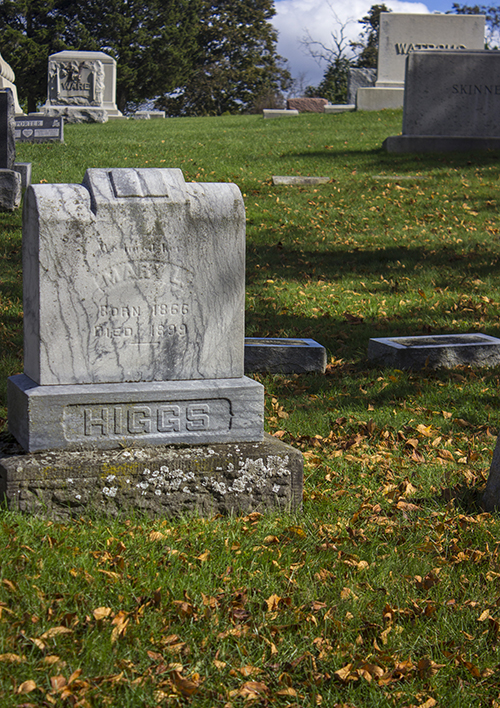 Lichen grow on the base of the tombstone of Mary L. Higgs, who died in 1899. Image: Colleen Otte

Regardless of the original intent of cemetery landscape designers, when it comes to protecting biodiversity, cemeteries provide “a lot of the same benefits you get from parks,” Klatt says. Whether urban or rural, they reflect the key ecological principle of “habitat islands” – patches of wildlife habitats surrounded by large areas of unsuitable habitat.

Sometimes nature reclaims its own in its relentless demand for survival.

That’s what I saw at Todd Cemetery, tucked into a forest opening along a gravel road in Indiana’s Hoosier National Forest. Just as the homes of those who lived nearby in the late 1800s and early 1900s have reverted to the wilds, so too has their final resting place lost the battle for permanence.

Scientists developed the concept of habitat islands to explain species richness on actual islands but expanded the concept to include other isolated natural communities such as cemeteries. The diversity found in each “island” depends on several variables, including size, distance to the next or nearest islands, and greenspace connections like river corridors and floodplains, such as the Sycamore Creek floodplain by Mount Hope Cemetery. 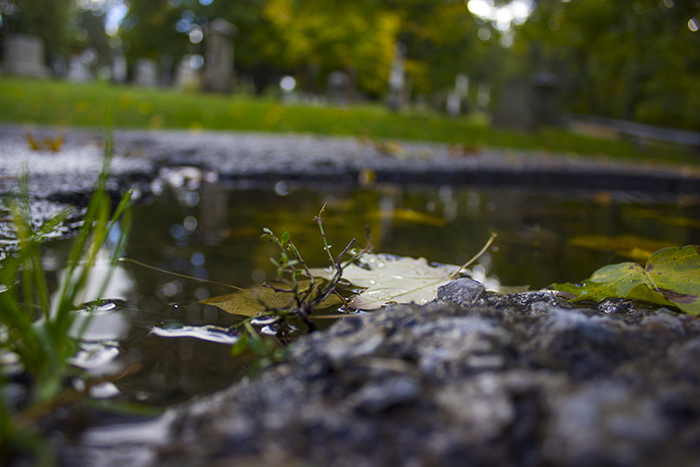 I’ve visited Mount Hope Cemetery many times, wandering along its narrow, hilly roadways and wondering about the people buried here, some of their names weathered away over the decades or obscured by lichen. And I’ve wondered at how life thrives in the unlikeliest of places. Those laid to rest here can’t hear the spring peepers in the Sycamore Creek floodplain or see the white-tailed deer nibbling at the grass above their graves. Fortunately, we can.

Given their comparatively small size and the general lack of connectivity between many cemeteries and other habitats, it would be an exaggeration to call cemeteries such as Mount Hope “earth arks” that can rescue endangered and threatened species from the floods of extinction and carry them to salvation, or at least eternal survival. Instead, perhaps we should think of them as small lifeboats that may carry some of their desperate passengers to at least temporary safe harbors.

This column is adapted from the author’s article in the spring 2017 issue of Earth Island Journal.