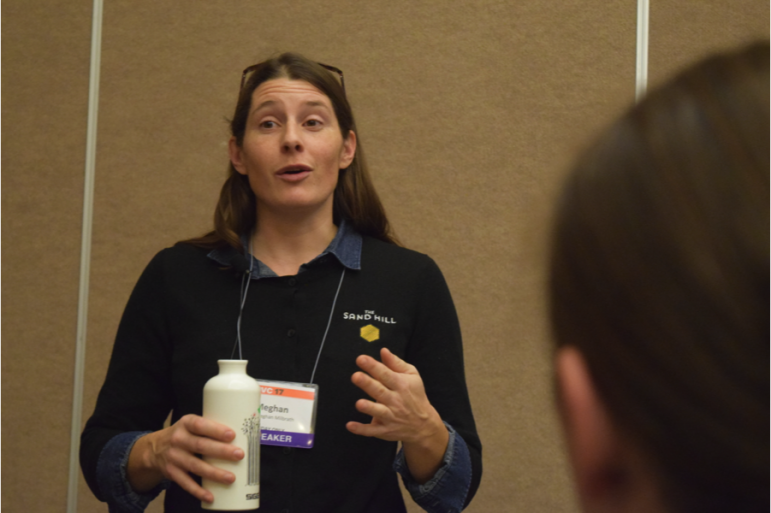 Meghan Milbrath, an academic specialist at Michigan State University and a beekeeper of more than 23 years, spoke at a recent veterinary conference. Image: Ben Muir

The Pollinator Initiative at Michigan State launched the search after a recent FDA decision outlawed over-the-counter antibiotics for all food-producing animals.

Medication for cows, pigs, chickens and bees is no longer available over the counter after low levels of antibiotics were detected in the food.

“The concern is that if it’s not well-regulated, antibiotics can get in the food supply, and then people get low doses,” said Meghan Milbrath, a beekeeper of 23 years. “And all of sudden you are resistant to those antibiotics. And if you get sick down the road, those antibiotics won’t work.”

That means a veterinarian has to give beekeepers a prescription for antibiotics.

Once a keeper gets the antibiotics from a pharmacy, he or she administers the medicine by mixing it in powdered sugar and covering the hive. Or they mix the medicine in sugar water and cover the bees.

Milbrath is an academic specialist at Michigan State who has been stung more than 1,000 times — including on her eyeball and inside her mouth — is the coordinator of the initiative to find bee veterinarians. The more than 10,000 beekeeper hobbyists in Michigan are great for honeybee awareness, but detrimental to its disease containment, she said.

“There is a really big issue with all of these colonies that are not managed well,” Milbrath said. “The bees are not healthy, and they’re spread across Michigan. A lot of people are starting to keep bees, but their bees get sick and die. When they die, diseases spread everywhere else.”

A veterinarian can recognize an infected colony early and give recommendations to either destroy it with fire or restore it with medicine.

Most beekeepers don’t like random people poking around in their colonies, Milbrath said. A colony will be set back a few days just by opening it because the scent is released and the work done by the bees is temporarily ruined.

“They have to stop making honey to fix everything and bring everything back to order. That can be pounds and pounds of honey lost,” Milbrath said. “If I was a beekeeper, and some yahoo came in and messed around, I could lose money from it.”

Strangers to the colony, like veterinarians, can squash bees, too, Milbrath said. And if a person is careless, the queen could suffer.

“We say that the most common cause of queen death is CBS — Clumsy Beekeeper Syndrome,” Milbrath said.

It’s a significant setback if the queen dies, Milbrath said. Bees have only a 40-day lifespan, and it takes weeks for a new queen to be introduced into a colony.

Milbrath’s job  is to help beekeepers overcome three significant obstacles: The first is finding a veterinarian who will work with bees. The second is how to get the antibiotic prescription. The third is finding a place to fill the prescription.

Milbrath has a list of 22 Michigan veterinarians who are willing to work with beekeepers, and it is online for beekeepers to find and pick from, depending on their location.

In the meantime, Milbrath will train the veterinarians on how to write bee prescriptions. She is teaching online courses and hosting monthly webinars. Eventually, she hopes to create a bee health elective in the College of Veterinary Medicine at MSU.

Jan Cerro, a veterinarian of 30 years in Interlochen, said beekeepers in her area are involved with mead, an alcoholic drink made by fermenting honey with water. She was excited to get involved after attending a bee talk by Milbrath.

“If they need help, I am willing to assist in that,” Cerro said. “But I first want to learn about treating bees before getting into it.”

Terry Ryan Kane, a veterinarian of 35 years in Ann Arbor, said people take bees for granted and are unaware of their contribution to the food production.

If bees didn’t exist, there would be no apples, onions, avocados, carrots, broccoli or cucumber, among hundreds more, according to the University Heights Whole Foods Market.

Kane said she is eager to work with bees and is not afraid of the pain that might come with it.

2 thoughts on “Searching for bee veterinarians”