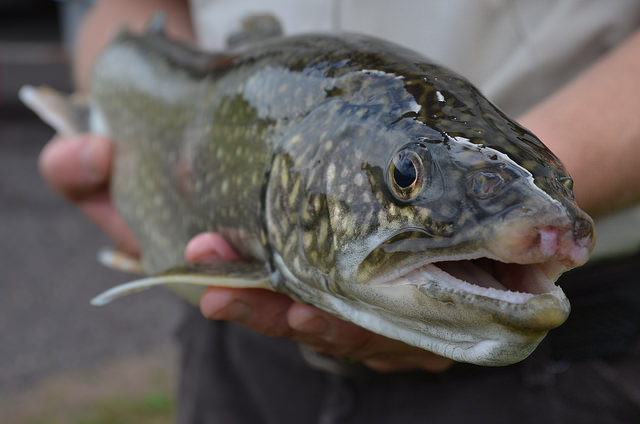 Lake trout was one of the species studied. Image: U.S. Fish and Wildlife Service.

Eating Great Lakes fish that contain mercury may threaten your health, but the nutritional benefits may outweigh the risks, according to a new study of lake trout and lake whitefish consumption by members of Native American tribes with high rates of obesity, diabetes and other diseases.

“Great Lakes fish should be considered for their nutritional importance relative to contemporary options, even when adjusting for risks of mercury toxicity,” according to the researchers from the Chippewa Ottawa Resource Authority’s Inter-Tribal Fisheries and Assessment Program in Sault Ste. Marie, Michigan, and the Medical College of Wisconsin in Milwaukee.

The findings come from the assessment program’s 25 years of studies of whitefish and lake trout from lakes Huron, Superior and Michigan. Authority members come from five Ottawa and Ojibwa tribes – known collectively as the Anishinaabe— in Michigan’s Upper Peninsula and Northern Lower Peninsula and represent fisheries’ interests.

Mercury in Great Lakes fish comes from emissions from coal-fired power plants and mining, as well as natural and other sources. Reduction of emissions often conflicts with industry interests, the study said.

Human exposure to methylmercury comes most often from eating fish and shellfish with high levels of the neurotoxin in their tissues, according to the Environmental Protection Agency. Symptoms include loss of peripheral vision, poor movement coordination, muscle weakness and impaired speech and hearing.

Evidence from medical studies shows that eating more fish containing PUFA-3 — a polyunsaturated fatty acid– can reduce the chances of cardiovascular disease and is a good source of lean protein.

However, members of the Anishinaabe eat only one-third of the recommended daily amount of fish “despite their heritage as a fishing culture” and proximity to the Great Lakes, according to the study. They also face higher rates of cancer, heart disease, obesity and diabetes than local nonnative people.

“Previous health workers in the region have examined diets of tribal members who have abandoned their traditional diets and found disturbingly high levels of obesity, diabetes and heart disease,” the study said.

“The dynamic assessment of benefits and risks demonstrates the importance of traditionally caught fish on tribal health,” the study said. “Both species caught by tribal fishermen showed clear benefits to cardiovascular health and infant neurodevelopment if consumed at a rate of six ounces per week.”

By comparison, researchers elsewhere have found “only marginal benefit or net negative effects on cardiovascular health and infant neurodevelopment” from other popular species such as tuna, tilapia and cod.

Study coauthor Matthew Dellinger, a Medical College of Wisconsin epidemiologist, said, “Even if they are only consuming fish at a casual sportfishing rate, it’s still culturally important to them.”

As the study noted, fish consumption isn’t a question of nutrition alone: “Fish are more than just a healthy food source for the Anishinaabe. They depend on wildlife, fish and plants for “religious, ceremonial, medicinal, subsistence and economic needs.”

Balancing health risks isn’t solely a scientific calculation due to individual and cultural factors. As Dellinger put it, “On the one hand, you have general risk aversion to any kind of chemical contaminant in the food, you have historically high levels of certain contaminants and you have whatever your personal level of risk aversion may be.”

Even the science is imprecise, he said, “No one knows exactly how safe or unsafe any particular fish is.”

Meanwhile, initiatives are underway to communicate the study’s data to the public and to educate tribal members.

Ripley, an environmental scientist in the Inter-Tribal Fisheries and Assessment Program, said necessary information also includes how to prepare and cook fish to reduce exposure to PCBs, such as removing fat and skin from fillets.

The Chippewa Ottawa Resource Authority’s current and future research efforts include other species as well, Ripley said. Among them are raising walleye in the Hessel area to stock the treaty area of the lakes and to sell, collecting of perch, lake herring and rainbow smelt, and development of a computer app to calculate risk.

The study includes a cautionary note because mercury isn’t the only health concern: Some Great Lakes fish may be too contaminated with pesticides, flame retardants and PCBs —or polychlorinated biphenyls – to eat six ounces or more each week.

The department is developing different Eat Safe Fish guides about consumption risks based on the fact that different people eat different amounts.

For example, frequent consumers of Great Lakes fish may want more detailed advisories and information than visitors to the state who eat only an occasional fish meal, Gray said.

The study appeared in the journal “Human and Ecological Risk Assessment.”