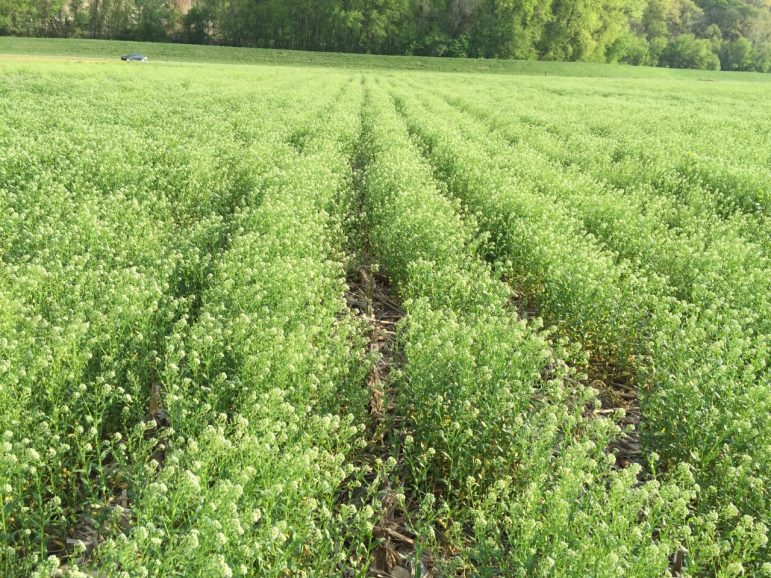 A new crop could add a new harvesting season for farmers in the Midwest, one that happens during the spring rather than the traditional fall.

Pennycress is planted in August or September, toward the end of the corn season.  It continues growing until late May. Because of this unique characteristic, this member of the mustard family could benefit both the environment and farming, according to agricultural researchers.

The plant is valued for the oil produced from the seeds which can be used as a raw material for biodiesel.

“During the 1990s the weed was popping up in early spring because there was nothing else occupying the fields,” Vaughn said. While considered a weed then, nowadays pennycress’s image is getting recreated as the next cash crop.

Researchers are trying to add it into the traditional crop rotation of corn and soybeans.

There are environmental benefits from growing pennycress, said Winthrop Phippen, a professor of plant breeding and genetics at Western Illinois University.

“And that helps absorb any leftover nitrogen that may be in the field.”

“And that keeps excess nitrogen from running off into streams and waterways,” he said.

Although harmless to eat, people don’t consider pennycress to be palatable.  As a crop to be grown mainly for biodiesel fuel it doesn’t take away land that could be used to grow food, said Jerry Steiner, chief executive officer of a pennycress development company — Arvegenix,

“The biodiesel industry and the renewable jet fuel industry are looking for a new feedstocks, the raw material needed to produce biodiesel, Steiner said. “But they want feedstocks that don’t compete with food.”

And pennycress helps meet goals set by federal and state government to reduce the production of carbon that is contributing to climate change.

The plant may see its rise in Michigan soon.

Stokes said he already has interested farmers in growing pennycress because of the money they can make without purchasing more land. He is trying to get Michigan farmers to grow a total of 400 square miles of pennycress on the corn and soybean fields.

“We pay the farmers to grow it,” Stokes said. “And it adds to their income stream, around a 20-30 percent increase in their revenue depending on the acreage they have.”

Arvegenix estimates that there could be $200 to $300 made from each acre of pennycress. Considering there are 35 million acres that farmers could put into pennycress, the crop could become a huge economic and environmental boost, Steiner said.