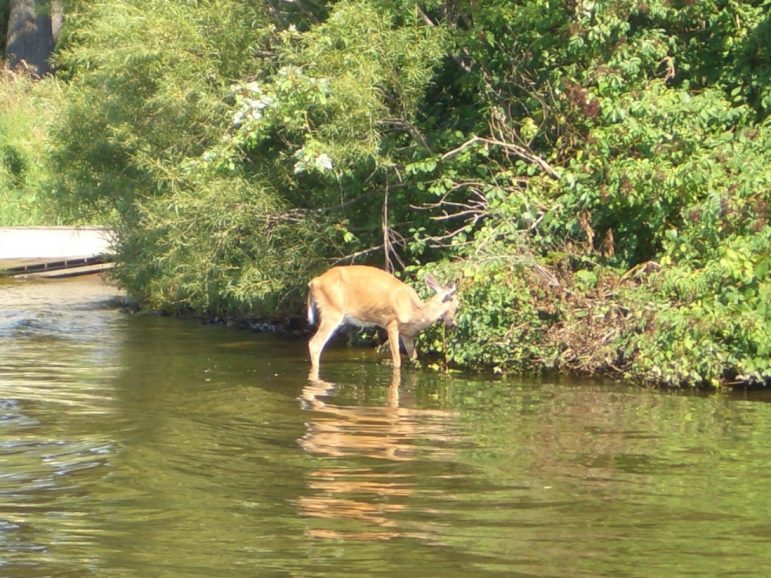 The report provides results of the first-year management strategy for chronic wasting disease in Michigan. Wildlife officials confirmed the disease in the state’s wild deer herd in May 2015.

During the past 16 months, the department tested more than 6,000 animals. The animals were killed by hunters, sharpshooters employed by the U.S. Department of Agriculture or in traffic accidents. Eight tested positive, the report shows.

All of those animals were found in Ingham and Clinton counties. More than 4,600 deer were removed from those areas.

Nationwide research concludes extensive culling is the most effective strategy for containing the highly contagious disease that attacks the nervous system of deer, elk and moose. Infected deer waste away as their brains and bodies lose function, according to wildlife biologists.

Sick animals may not show visible symptoms for up to 18 months, experts say. During that time, they spread the disease to other animals and shed nonliving proteins called prions, which can remain in the environment for decades and infect additional deer.

There are no vaccinations or treatments for the disease. It is not a virus or parasite, which means animals can’t eventually become immune, according to wildlife researchers.

It’s necessary to manage the disease with less consideration for the current population than for the future herd, said Chad Stewart, a Department of Natural Resources deer management specialist. “As soon as you start laying off the gas, that is when we will start seeing an increase in the growth of the disease.” 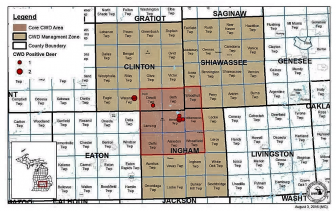 The dots within these Michigan deer management zones represent where deer with chronic wasting disease were found. Image: Michigan Department of Natural Resources

The report shows almost half of the deer tested were killed by hunters. Sharpshooters killed approximately 20-percent. Their use is controversial because some hunters say they see fewer deer, Stewart said. But a rampant disease is more disturbing.

“If you see an animal in late stages of this disease, it is not something you want any animal going through,” Stewart said. “They are wasting away. They are neurological zombies.”

Stewart says sharpshooters work at night and can better remove multiple deer at once. They work throughout the year, rather than during hunting season alone. Sharpshooters also submit deer for mandatory testing, which hunters sometimes fail to do, he said. State reports show five of the eight deer that tested positive were killed by sharpshooters.

Hunters in Illinois fought the practice of sharpshooting. They called for the Illinois Department of Natural Resources to instead manage the disease through hunting.

“This goes way beyond harvest levels that hunters could obtain,” Chapman says. “This is when things get more contentious. The Illinois Department of Natural Resources wants smaller herds, and sport hunters are forced to stomach sharpshooters carrying out the plan, while they’re left with a lot less deer to hunt.”

Disease management experts in Michigan say the state benefited from watching other states respond to chronic wasting disease in their own deer herds.

A new study by the University of Wyoming, published in PLOS One found 42 percent of female white-tailed deer were infected, while 21 percent of the males tested positive.

Minnesota and New York are two of the best examples of managing chronic wasting disease, says David Williams, an assistant professor in Michigan State University’s Department of Fisheries and Wildlife.

Both employed an extensive strategy of removal, testing and surveillance. The states are considered to have the disease effectively removed, says Williams.

“By reducing the total number of deer, we can reduce the chance that the disease will spread to uninfected deer,” Williams says.

This is especially important in a suburban area like the disease-positive zone near Lansing where deer are abundant and suburban development keeps them close to one another, he says.

The disease control effort is part of the university’s Boone and Crockett Quantitative Wildlife Center, which is researching long-term ways to manage the disease. Besides employing sharpshooters, the state’s current strategy includes check stations staffed by Department of Natural Resources employees.

Michigan’s deer-hunting season began in September. Michigan’s disease management plan relies heavily on hunters within the management zones to have their deer tested, says Stewart. Baiting is banned in the zones surrounding the infected area due to the risk of disease transmission while feeding.

The Department of Natural Resources has launched a campaign to dispel myths about the disease.