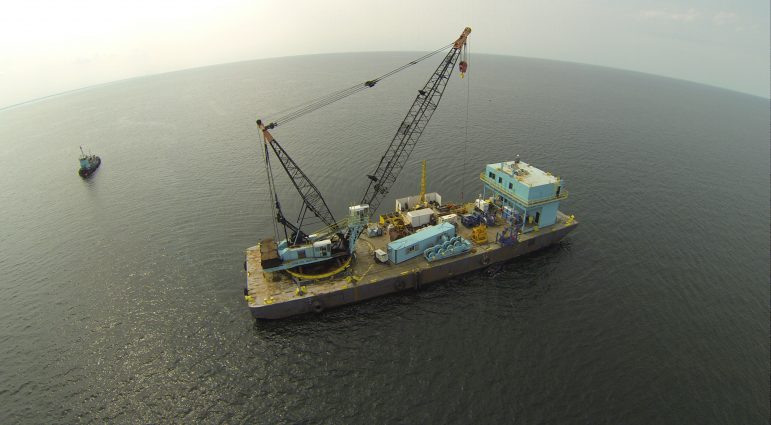 A drone took this image of a barge collecting soil and data from the lake bed of a proposed Lake Erie wind farm in 2015. Image: Lake Erie Energy Development Corp.

Armed with a $40 million federal grant, the Lake Erie Energy Development Corp. (LEEDCo) plans to start building the first wind farm on the Great Lakes in the summer of 2018.

But government officials, legal experts and opponents of the Lake Erie project say many hurdles remain before construction can begin.

The company has yet to receive the go ahead from a litany of necessary state and federal regulatory bodies, said Suzanne Albright, a member of wind energy opposition group Great Lakes Wind Truth.

“It’s hard to say if they could start building in two years because we don’t even have the complete application,” said Ohio Power Siting Board outreach manager Matt Butler.

The siting board must approve the location of any new power generating facility in Ohio, said Nick Schroeck, director of the Wayne State University Law School’s Transnational Environmental Law Clinic.

Even after the corporation completes an application, it would take eight to fourteen months for the siting board to approve, Butler said. Even then an appeal to the Supreme Court of Ohio by opposition groups could take years.

Such legal action by anti-wind energy activists is not a certainty, Albright said. “But be sure the opposition is not going to walk away.”

The siting board denied the corporation’s application for the project near Cleveland in April 2014. LEEDCo has not filed a new application since, according to siting board records. The board’s denial letter lists 14 concerns, mostly focused on the site of the turbines, the noise they generate and their potential to harm wildlife.

The corporation is addressing these concerns by proposing that the closest turbine be 8 miles from the Cleveland shoreline instead of 7 miles, said Dave Karpinski, the corporation’s vice president of operations.

The siting board has requested a summary of the impact of the proposed wind turbines on birds and other wildlife.The U.S. Army Corps of Engineers has yet to receive an initial application from the corporation, said Mark Scalabrino, chief of that agency’s Ohio application evaluation section. The Army Corp and LEEDCo had a pre-application meeting on July 19.

At the federal level, the main actors regulating the project are the U.S. Department of Energy and the Army Corps of Engineers, Schroeck said. At the state level they are the Ohio Environmental Protection Agency and Department of Natural Resources.

These groups rely on input from numerous other government agencies, such as the U.S. Fish and Wildlife Service, he said.

Since federal and state regulators know this project likely is not the last offshore wind project application they will see, they may be more deliberative when handling LEEDCo’s project, he said. “They don’t want to have to reinvent the wheel every time they go through this permitting process.”

Despite these hurdles, financial support for the corporation in the public and private sectors continues to grow.

The corporation was awarded a $40 million Department of Energy grant in May and in 2014 entered into a partnership with Fred.Olsen, a Norwegian energy company.  Fred. Olsen bought LEEDCo’s research assets and agreed to build the project, according to LEEDCo press releases.

“Typically when a company receives grants or tax credits from the Department of Energy they are farther along in the application process,” Schroeck said.

Typical nuclear or coal power plants produce up to 1,000 megawatts worth of energy, Karpinski said. LeedCo’s project will max out at 20 megawatts, about enough to power 6,000 homes.

Such a small project poses a correspondingly small  threat to birds, according to a 2013 risk assessment report done by the New Jersey based Curry & Kerlinger wind energy consulting firm.

The six turbine project is intended to demonstrate offshore wind power in the Great Lakes with hope that similar projects will follow, said Ohio Sierra Club director Jen Miller. The club supports the project as a clean source of energy.

By 2019, a new offshore wind energy industry will be taking shape as utility scale projects in Lake Erie begin, according to LEEDCo’s website.

That has some people nervous.

“We are very concerned there will not be sufficient oversight over where these future wind turbines are placed,” said Sherri Lange, head of the North American Platform Against Wind Power, which represents numerous anti-wind energy groups across the U.S. and Canada.

Lake Erie is the only Great Lake crossed by songbirds, shorebirds and raptors and the birds pass through the western portion of the lake where LEEDCo’s project will stand, said Albright. The birds’ path includes the project’s proposed site.

Says LeedCo’s Karpinski: “Based on the data we have already collected and continue to collect there is minimal impact to wildlife.”

It is a hard threat to characterize. Counting carcasses to determine the number of birds killed by offshore turbines is difficult, if not impossible, according to the 2013 risk assessment report.

Carcasses simply float away or are consumed by animals, Albright said.

European offshore turbines have employed heat sensing, thermal imaging cameras to monitor the presence of birds with varying degrees of success, according to the report.

LEEDCo has and will continue to work with state and federal regulators to minimize the turbine’s threat to wildlife, Karpinski said.

People opposed to the turbines who are concerned about birds’ wellbeing need to consider the threat posed by climate change caused by burning fossil fuel, said Trish Demeter, managing director of energy programs for the Ohio Environmental Council, an environmental advocacy group in the state. The council supports the project.

Editors note: This story was updated Sept. 2, 2016 to correct the distance from the shoreline of the proposed turbines.