To attract new visitors and save money, many state parks across the Great Lakes region are updating utilities and campsites and creating programming for less traditional visitors.

The growing popularity of recreational vehicles influenced some of the changes, said Heidi Hetzel-Evans, a communications manager for parks and recreation at the Ohio Department of Natural Resources. In 2014 her program received $88 million in new state funding to improve buildings and other facilities.

The state sold bonds to finance the improvements, said Tom Betti, a communications manager at the Ohio Office of Budget and Management.

Parks officials increased the number of campsites with water and sewer hook ups and upgraded the availability and wattage of electrical hook ups, Hetzel-Evans said.

“Camping looks different than it did 15, 20 years ago,” she said. Campers want to plug in electronic devices and use the flush toilets aboard their RVs.

It paid off. Ohio state parks have seen a 20 percent spike in overnight camping revenues since the improvements began two years ago, she said.

Most of the 200 campsites improved this year became available  on June 1 when the division sold a combined 1,000 nights of camping, she said.

Those participating in Ontario’s Learn to Camp or Michigan’s First Time Camper programs arrive to a fully set up campsite with park employees to guide them.

“We want to promote camping to a different demographic that may not be using our parks currently,” said Greg Wake, acting manager of operations and development for Ontario Parks. 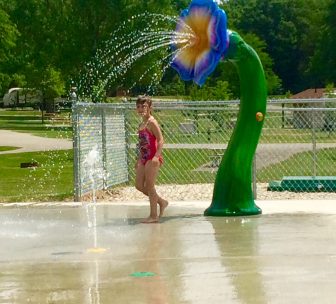 The department’s Rec 101 programs teach new campers such skills as kayaking, paddleboarding, mountain biking and geocaching, he said. Equipment is included for all the programs.

Rec 201 programs allow experienced parkgoers to further hone their skills, he said. The goal of the programs is to sell more annual park admission passes by introducing a wealth of recreation opportunities.

The programs were introduced between 2009 and 2010, said Maia Turek, statewide recreation programmer for the department.

Since 2011, annual park pass revenues have increased from $19 million to just shy of $26 million in 2015, according to the department.

Ontario’s similar Learn To Camp program has drawn more than 12,500 participants since it began in 2011, including 3,151 participants in 2015, according to the province’s Ministry of Natural Resources and Forestry.

Nearly 60 percent of the program’s 2014 participants went on a subsequent camping trip, and 91 percent said they planned to within the next two years, according to a 2015 ministry survey.

Parks in Michigan and Ontario are also investing in greener, cost-saving campgrounds.

The New York State Office of Parks, Recreation and Historic Preservation has received $90 million in state funding and private donations annually since 2011 for an overhaul of the state’s park facilities, said Randy Simons, public information officer for the office.

The $900 million investment to be meted out by 2020 is the largest ever-state investment in parks, he said.

The office emphasizes updating heavily used sporting facilities in low-income communities with high rates of obesity and diabetes, and those used by disabled parkgoers, according to a report from the office.

The revenue picture isn’t all good across the region. Other states are seeing funding evaporate.

Wisconsin’s legislature and Gov. Scott Walker took away all state funding to the Wisconsin State Park System for this year. That had comprised 20 percent of the parks budget, said Chris Pedretti, property services section chief for the system.

To compensate for the loss, the system has increased admission fees.

Wisconsin increased the cost of annual admission passes by $3 for residents and out of state parkgoers, said Wisconsin parks communications specialist Paul Holtan. The passes used to cost $25 for Wisconsin residents and $35 for non-residents

The cost for one-hour admission increased from $3 to $5 and daily admission from $7 to $8, he said.

2 thoughts on “State parks invest in upgrades to attract new campers, save money”