If the phrase “there’s no rest for the weary” applied to anyone it could be Michigan’s embattled chief executive, Gov. Rick Snyder.

Immersed in trying to manage the Flint water crisis — and move the discussion to solutions mode – Snyder doesn’t get to hit the pause button on other issues.

I talked with Snyder this week about Waukesha’s precedent-setting water diversion request, Enbridge’s Straits of Mackinac pipeline and protecting citizens in southwest Detroit – the most polluted area in the state.

And yes, we discussed the Department of Environmental Quality, everyone’s “fall guy” for the Flint water crisis.

Snyder said he’s proactively “working to empower MDEQ employees to make common sense decisions” that protect citizens instead of prioritizing adherence to regulations at the expense of the people.

The compliance with a rule mentality was a significant criticism of Snyder’s task force that reported on what went wrong with Flint.

Culture change applies to the governor’s office too, according to Ari Adler, Snyder’s director of communications.

“We are demanding more answers from departments and questioning answers that don’t seem right,” Adler said in a follow up to my interview with his boss.

Bureaucracies are slow to change though, and Snyder acknowledged that making cultural change will be “challenging.”

But there has been initial progress.

This week the MDEQ rejected a plan that had been in the works to deregulate a list of toxic chemicals.

The test however is to sustain that level of protection and precaution over time, not just in the face of Flint fallout.

Waukesha’s long-awaited request to divert Lake Michigan water out of the basin is on the desks of Great Lakes governors now. They have to decide next month and it’s a big decision –  the first test of the Great Lakes Compact that will set a precedent.

Snyder said he hasn’t decided how he’ll vote on Waukesha then prattled off on an obligatory we have to protect the Great Lakes pitch that politicians love to recite. Circling back, he said the provision in the Compact that allows Waukesha to apply for a diversion has to be reconciled with potential reasons to deny the request. One thing he doesn’t want is a legal battle between the states over Waukesha.

“It’s important for the states to talk so the issue doesn’t end up in the courts,” Snyder said.

Southwest Detroit and the Straits of Mackinac pipeline 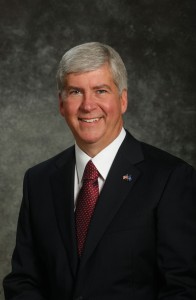 area where citizens can feel a connection to those of Flint. They feel their complaints are unheard, ignored or both.

Snyder told me that he has given interim MDEQ chief Keith Creagh direction “to make sure citizens are heard” before pollution permits are approved.

I asked Snyder if he would use the gravitas of his office to pressure the federal government — the responsible party for pipeline safety —  to shut down the Enbridge pipeline across the Straits of Mackinac or demand a replacement plan.

He continued to defer to the feds on the pipeline.  Adler later said that the governor won’t decide on a course of action on it “until he feels he has all the information he needs to make a solid decision.”

All of these issues are important and whatever Snyder does, it will be looked at with Flint as the backdrop. That’s his reality today, fair or not.

And let’s be realistic, these environmental decisions aren’t the biggest one’s on his plate. They can pale compared to fixing Detroit’s public school system. The city’s nascent renaissance can’t be sustained without functioning schools.

And there are some who aren’t ready to trust the governor in spite of his mea culpas and promises of change. The criticism is relentless.

“The governor lied by omission during his state of the state speech regarding the emergency manager’s role in deciding to use the Flint River …,” Curt Guyette told a group of journalists at a workshop sponsored by the Institute for Journalism & the Natural Resources on Monday.

Guyette is a former journalist for Detroit’s Metro Times who now does investigative work for the American Civil Liberties Union. The ACLU is one of the not-for-profits advocating for Flint citizens in dealings with local and state officials.

Adler’s reaction to the charge:

“Gov. Snyder has called for an unprecedented level of transparency by releasing executive office emails and documents related to Flint. The governor has been fully cooperating with all investigations and has called for additional ones.”

There have been email dumps, three congressional hearings on Flint with another one scheduled and a task force accountability report. There are multiple investigations in process which will play out over time as they should.

That’s a lot of scrutiny.

All of this provides fodder for legitimate critics and those who are more focused on revenge than results. But providing safe drinking water for Flint is Snyder’s job now and he’s directly and personally responsible.

And yeah, he has to deal with water diversions, Enbridge pipelines and southwest Detroit’s enviro problems too. There’s no rest for the embattled governor of the Great Lakes state.