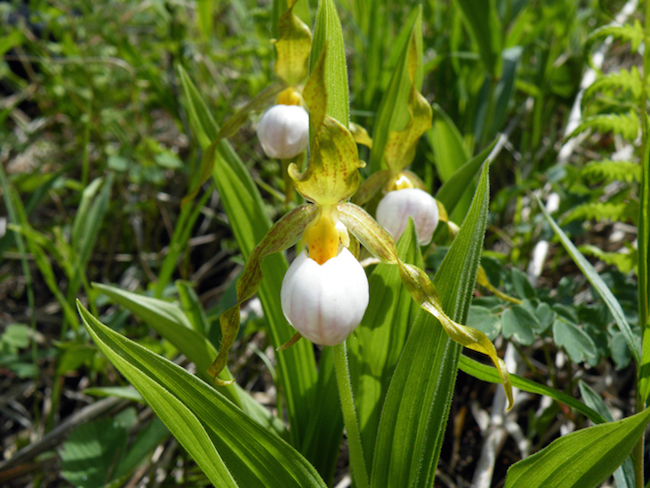 As climate change threatens wet landscapes with persistent and intense droughts, natural resource managers look for ways to preserve the remaining habitats of the rare species that dwell in them.

That problem — the uncertainty of the future climate — was the focus of a recent study of how best to protect a rare orchid in Minnesota called the small white lady’s slipper.

“Management of very specific, local sites is important because conservation is really a boots on the ground effort,” Galatowitsch said.

State plans guide policy, but day-to-day decision-making usually happens one place or person at a time.

Managers need to know what climate impacts they can expect, how likely they are and what local strategies best promote native plant growth, Galatowitsch said.

In the Great Lakes region, the lady’s slipper is rare, threatened or endangered in Minnesota, Wisconsin, Illinois, Indiana, Michigan, Ohio and New York. It is no longer found in Pennsylvania.

“Both the orchid and its wet prairie or meadow habitat are increasingly vulnerable to climate change,” said Laura Phillips-Mao, the study’s lead author and adjunct professor at the University of Minnesota.

Lady’s slipper is a short orchid that flowers from late May to early June. It is named for the shape of its inflated lower petal. It’s monitored in Minnesota, but its numbers continue to decline due to competition with invaders and continued fragmentation of its preferred habitat, she said.

The plant’s habitat is managed using controlled burns — necessary for a healthy and diverse prairie — and targeted invasive species removal.

The study used 54 climate scenarios to predict how populations of lady’s slipper could change over 100 years within the Expandere Wildlife Management Area in southwest Minnesota. 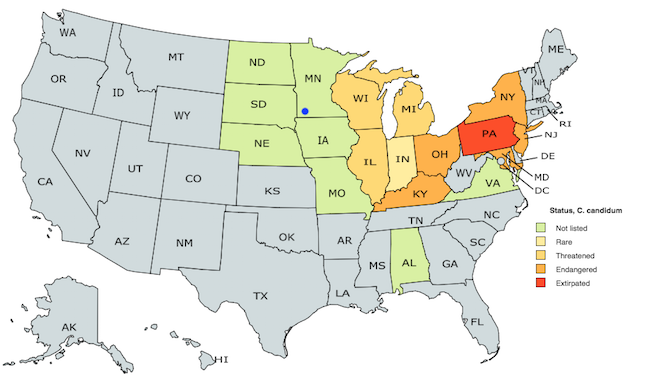 Small white lady’ slipper occurs across the Great Lakes region and in Ontario, Manitoba and Saskatchewan (not pictured). The Expandere Wildlife Management Area is dotted in blue. Image: Kevin Duffy

“We asked what happens if the water table drops 6 inches. We asked what if drought becomes twice as frequent. What if, on top of those hydrologic factors, invasive species are introduced?”

Drought frequency and the depth of the water table are climate variables that were adjusted in the computer model. The impact of invasive species, especially by the non-native reed canary grass, was also considered.

“Minimizing the impact of invasive species matters a lot to sustain populations through these big climate events that we will probably not be able to control,” Galatowitsch said.

Not all the impact is negative.

“If you change the environment, some sites will become less suitable and some may become more suitable, and with some lag time, the plants will respond to that,” she said.

The effects of drought and changes in the water table are similar for the water-sensitive lady’s slipper, according to the study.

“But when you start combining impacts, there’s a bigger decrease in the population,” Phillips-Mao said.

For example, when a water table is lowered and invasive species are introduced, the damage is worse than when drought is combined with an invasion. And the first combination could prove fatal to Minnesota’s remaining lady’s slippers.

“While we were not able to identify a single factor that had the greatest impact on lady’s slipper, we found useful information for management,” Phillips-Mao said.

The small white lady’s slipper is extremely sensitive to invasion by reed canary grass, cattails and woody non-natives. And the orchid continues to suffer even after invasive plants are removed.

But reducing environmental stressors by removing invasive species is easy to do and it helps.

“But if it’s assumed that controlling invasive species is sufficient to save the plant, it probably isn’t,” Phillips-Mao said.

“We need to start thinking about additional strategies that may seem riskier,” she said. Such strategies could include transplanting species into future suitable habitat.

The study focuses on one species in one area, much like managers do. It doesn’t apply to all species, but it’s a useful exercise for rare climate-sensitive species that we don’t know much about, Phillips-Mao said.

“It’s useful to use scenarios to help managers imagine what might happen and how to prepare for future impacts.”

What actually plays out depends on the model’s accuracy. Researchers will be watching.

“There will be an uptick in the monitoring of the plant in the future,” Galatowitsch said.

Researchers recommend that managers monitor the water table to get a sense of which of the 54 scenarios is closest to what’s happening.

“We want to know what we’re heading toward and how to lessen the impact to rare species,” Galatowitsch said.