Although Michigan is the only state available, the map will serve as a model for other states, according to the Center for Food Safety , which is a non-profit organization focused on organic and sustainable forms of agriculture.

The map includes the location and size of the factory farms and allows users to select layers such as: environmental violations, federal subsidies and nearby waterways. 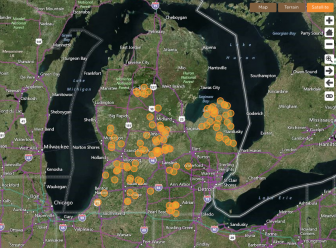 The digital map tracks factory farms and what is located near them.

Almost all of 75 factory farms in Michigan have nearby waterways.

The nutrients found in high levels downriver of these large farms are the same nutrients linked to the harmful algal blooms in Lake Erie.