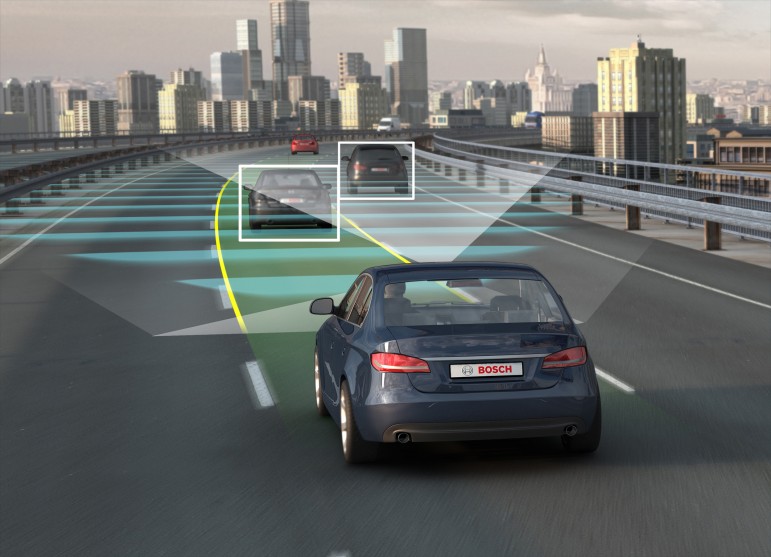 Robot drivers that can automatically accelerate, brake and steer are under development. Image: Press photo, Bosch

Cars that drive themselves may be safer, smarter and more efficient than those driven by people.

But will they be better for the environment?

It’s a question with no solid answer, said John DeCicco, a research professor at the University of Michigan’s Energy Institute, and a faculty adviser of the university’s MCity — an entire city for the testing of the vehicles, complete with cutouts of pedestrians and stoplights.

Some aspects of the vehicles could greatly reduce energy use and emissions, while other aspects could increase emissions, said DeCicco.

Driving efficiency improves greatly with an autonomous infrastructure. It has fewer traffic jams and accidents. Vehicles could become smaller and lighter because crash safety is less of a concern without the imperfect human drivers.

This could be especially true in urban settings where large cars aren’t desirable, said DeCicco. Smaller, pod-like vehicles and autonomous, electric taxis could be more likely.

“You’d call one like you’d now call a taxi or an Uber car, and it comes and gets you and takes you where you want to go, and then drops you and goes off to serve the next person,” he said. “And in a dense area where that makes sense, those vehicles could very well be electric. You no longer have to worry about plugging them in and waiting for them to charge.”

But the environmental implications for self-driving cars aren’t all positive.

Driverless cars make commuting much easier. That could lead to larger growth in suburbs and more workers choosing to commute longer distances.

“I’m going to be able to have a house further away, which might mean a house that’s less expensive, on a bigger piece of property that I can afford because I’m now an hour outside of the big city as opposed to a half hour,” DeCicco said. “And so what you have in that scenario is a situation where energy use would probably increase.”

Driving becomes a passenger experience. Vehicles could get larger if there is a demand for larger, more comfortable seats and more entertainment options during a daily commute.

This less-efficient scenario should have us concerned, says Kara Kockelman, a professor of engineering at the University of Texas, who has written about automated cars and energy concerns.

“I think it could go either way with these things, and I’d be really concerned about policy to make sure that (emissions) don’t go up and that driving doesn’t become more congested.”

Discouraging the production and popularity of large, inefficient, luxury, driverless cars should be on policymakers’ minds, she said.

“If I were the cities, I would be requiring that (the cars) be as fuel efficient as possible,” she said. ”I would be giving those providers a lot of incentive.”

Another way to create efficiency, and mitigate the effects of potentially large, inefficient autonomous vehicles is car sharing, Kockelman says. Like the weekly carpool to work, autonomous taxis and Uber cars in cities could pick up multiple passengers en route to destinations near each other. She said this is something that could save companies — and passengers — money, but also combat a potentially larger carbon footprint in the future.

“You may be able to share that ride, which makes the vehicle much more efficient, and it makes the cost much lower to the travelers,” she said.

Considering the environmental impact is important as the drive to autonomous vehicles appears to be picking up steam.

The 319 million people in the U.S. drive 254 million vehicles. As many as 90 percent of Americans drive to work, according to the Brookings Institute.

Autonomous cars have been tested in such states as California, Nevada and Michigan.

While the technology is in development, Google, Audi and Mercedes-Benz are improving mapping to let the vehicles optimize routes and avoid missed turns.

The cars will “talk” to each other to understand where other vehicles are on the road and avoid collisions, DeCicco said.
The technology still has a long way to go in terms of testing and perfecting, but DeCicco says some versions of autonomous car could be available sooner than you think.

Google recently announced it will market one by 2020.

But a truly autonomous vehicle requires development and infrastructure changes that will take decades. Google’s announcement is overly ambitious and misleading, DeCicco said.

For one thing, the roads aren’t ready.

“A lot of times, the conversation about driverless cars goes on as if you’re just going to take the same cars and the same transportation system we have today, and drop in this super-capable robot machine that can do everything humans can do but a lot better,” DeCicco said. “It’s not going to be that simple.”

Autonomous cars will be much different than the vehicles we drive today, he said.

Which environmental impact weighs most?

Is that evolution good for the environment?

Without traffic jams and minor accidents, it’s likely that more people will drive more often, leading to increased emissions. A larger, comfort-oriented vehicle isn’t likely to be as gas-efficient and may not be able to use alternative energy like electricity, DeCicco said.

If it became the norm, it could have serious impacts on transportation’s energy footprint and emissions.

But, as DeCicco says, neither scenario is an absolute.

So will robot-driven cars be inefficient and encourage urban sprawl, or tiny, nimble and efficient?

“I can honestly say, I don’t know. And I don’t think anyone can really predict.”

Kockelman says it depends on who wins the policy game and how much thought is given to environmental impacts.

“You know, I think society is slowly becoming more concerned about climate change,” she said. “Climate change and the conservation of energy are a concern.”