“A big goal of the studies is understanding what are the traffic flows now?” she said. “Where are people going? Where are people coming from? How are they getting there? And then what is the likelihood that [they] would switch to a train if they had that option?”

About one-third of Michigan’s population is too young or too old to drive or they are physically or financially unable to, Treutel said. And rail is the friendliest motorized transportation for the environment. It helps attract and retain recent college graduates who care about protecting it, she said.

“Rail is often more efficient,” she said. “It’s not as good as biking or walking, but it’s 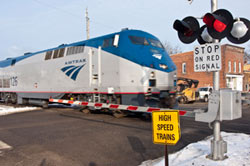 certainly better than driving, flying or taking the bus.”

Rail also has economic impacts for the communities it connects.

Grand Valley State University recently quantified those benefits, such as the money Amtrak spends on equipment and labor and the money travelers save and can then spend in local businesses, she said.

The four major proposals for railways between cities in Michigan include a commuter line that would run from Howell to Ann Arbor and another from Ann Arbor to Detroit, Treutel said. Longer routes are proposed to run from Ann Arbor to Traverse City and from Detroit through Lansing and Grand Rapids and end in Holland.

“They’re all very different,” Treutel said. “They’re serving different areas of the state, and they’re at different points of development.”

That means that the projects are unlikely to conflict with each other, Treutel said. But competition for funding and local match money ultimately depends on plan and construction timelines.

Another reason that all four systems are plausible is that they are all based on existing rail infrastructure now used by freight traffic, Treutel said.

“There are agreements, contracts and technology in place so multiple entities can use the track,” Treutel said.

But the quality of the track is held to a higher standard for passenger rail than for freight, she said, so some areas of the existing tracks need to be improved, especially to allow the passenger rail to run at the typical speed of 70 to 100 miles per hour.

Areas that require upgrades include a significant portion of the Detroit to Holland line and an eight-mile stretch on the northern end of the Ann Arbor to Traverse City line, Treutel said.

The feasibility study assessing the Detroit-Lansing-Grand Rapids-Holland corridor is headed by Treutel and the Michigan Environmental Council, in partnership with the Ann Arbor Area Transportation Authority and Michigan Department of Transportation.

Their $100,000 study launched March 19 is a seven-month project. It is funded by federal grants matched by contributions from community organizations along the corridor that support the proposed line.

It will assess ridership demand and estimate costs, Treutel said. The main goal of what is called the coast-to-coast railway is to connect Michigan’s major cities, which haven’t been connected by rail since 1971, she said.

The group is considering several different routes, Treutel said, but every route would go from Detroit to Holland and run through Grand Rapids and Lansing.

“It’s really a matter of how they get between Detroit and Lansing — that’s where the deviations come in. That’s basically figuring out if Ann Arbor will be included in that or not,” she said. “For example, it could go down through Ann Arbor, then up to Lansing, or up to Howell then over to Lansing, and it could go over to Jackson…”

The goal is for the passenger rail system to be self-sustaining based on its revenue from ticket fares, Treutel said.

“But we know that most of the time that’s not the case with public transit,” she said. “Almost always, there’s going to be some kind of investment needed from either a local, regional, state or federal government.”

Ticket sales only cover part of Michigan’s Amtrak costs, Treutel said. The rest are covered by state and federal investments in the rail system. The results of the coast-to-coast study would help determine how much funding has to be procured from other sources.

If the study proves the line is feasible, then it would require additional studies, including an environmental analysis and an assessment of the willingness for public investment.

Treutel said a fair estimate for how soon service could be in place is seven to 10 years.

“But we’re not just sitting on it,” she said. “We’re trying to see if this is something we can move forward with, and this study is the first step in that.”

The proposal has a lot going for itself, Bourgeau said, considering the airports and other amenities like the stadiums, concert venues, theaters and festivals that draw travelers.

The duration of the rail trip between Ann Arbor and Detroit would be 50 to 65 minutes or about 38 miles, he said. He estimated the railway would serve at least a couple thousand people per day.

Bourgeau said planners hope to enter the environmental assessment stage this year, which would take about eight months to get completed and approved. Next, they could begin putting out bids for the construction, which he said would probably take about two years since they have to keep the existing tracks operational.

“We still have to be able to run the Amtrak trains through any freight travel, so we’re going to have to draw construction around those trains,” Bourgeau said. “If we were able to just close it all down and get it done it would be much quicker, but we can’t do that.”

A study of a 27-mile route between Howell and Ann Arbor that reassesses cost estimates that go back seven years concludes this December, said Michael Benham, strategic planner for the Ann Arbor Area Transportation Authority.

The route is officially called the North-South Commuter Rail project, but has been dubbed the WALLY project because it connects Washtenaw and Livingston counties.

About 1,300 people could benefit from the commuter railway in daily round trips, Benham said.

It is not just the study results and whether or not the railway is “feasible from the bricks and mortar standpoint,” but also the political willingness of the communities, that will determine the likelihood of implementing the new route.

He said he supports the proposal because such public transit projects can “shape the development of communities in a sensible way.”

They hope to complete it within the next couple years, Bruckbauer said. Then they would launch an environmental review and engineering study.

“One of the largest costs when you’re taking on a big transportation project like this is purchasing all the land and laying down the tracks,” he said. “And in this case, the land is still owned by the state and the tracks are already there.” 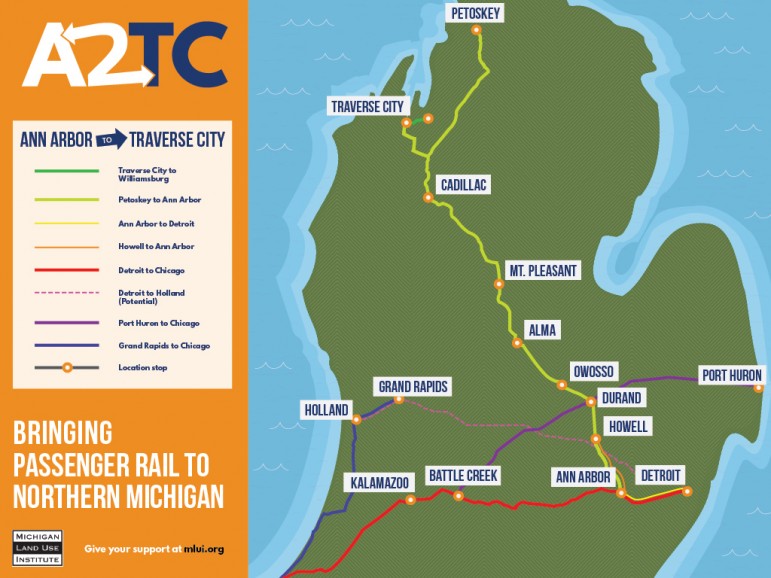 project would operate on, Bruckbauer said.

“However, the service that we’re talking about would not be the multiple-times-a-day commuter service,” he said. “The WALLY is intended to serve the everyday commuters in Ann Arbor, so it’ll probably run anywhere from six to eight times a day and in the mornings and afternoon.”

Because it would serve people traveling longer distances, the Ann Arbor to Traverse City route would probably be a once-a-day service at the most, Bruckbauer said. He said they hope to run demonstration trains as the study is conducted.

“Not on a regular schedule, but around special events maybe in the summer and in the winter, so that we can assume that train travel can work between the two areas,” he said.

The proposed route already has a lot of public enthusiasm, Bruckbauer said. A 2011 survey for passenger rail revealed that the priority of people statewide was a passenger connection to Traverse City.

“Rail is really seeing a resurgence in the United States and in Michigan,” said Treutel. “Amtrak has seen pretty major ridership increases over the past ten years, and things are showing they’re just going to keep moving in that direction.”