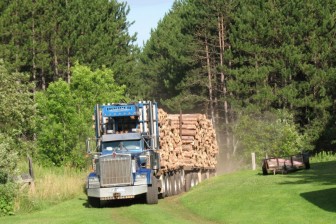 Capital News Service
LANSING – The woods are calling, and so are logging and wood products companies.

Calling for skilled employees, that is.

Experts say the labor shortage hampers economic growth.
Many experienced foresters and other workers in Northern Michigan are retiring. At the same time, jobs in other industries such as mining, energy and construction often pay higher wages than those at timber-related companies.

The demand is expected to continue as the state looks for new uses for forest resources, including products and energy, according to the Michigan Biomaterials Initiative.

More than 27,000 jobs are directly in the state’s forest products industry and more than 146,000 are supported by Michigan forests, according to Michigan State University Extension.

“Our members are keenly concerned about a tremendous lack of skilled labor, or even unskilled but trainable labor, for our timbering companies, our sawmills, our manufacturers,” she said.

Recently launched initiatives in the Western Upper Peninsula and the Onaway area are meant to provide some of that training.

Two major factors are lack of training and lack of knowledge about opportunities, Owen said. “Everybody thinks they’re going to carry chainsaws, but we have some pretty high-tech jobs available.” They include lumber graders at sawmills, equipment operators and forklift operators.

Employees are needed to run state-of-the-art computerized, mechanized equipment that’s operated with a joystick, like a video game.

Also in short supply: welders able to go into the woods to fix heavy equipment and drivers for logging trucks.

“We’re struggling to get viable employees in those positions,” Owen said, adding that the association wants to collaborate with Michigan Works! to provide on-the-ground training.

Ironically, the recent expansion of opportunities in other industries lures people away -from timbering-related jobs.

“There’s no way we can compete with construction,” said Brian Nelson, co-owner of Marvin Nelson Forest Products in Cornell, near Escanaba. “If you can operate a harvester, you can operate other heavy equipment.”

Nelson said his logging company competes for employees with two paper mills in the Escanaba area. Skilled workers at the mills earn at least 1½ times what he pays.

“We try everything, word of mouth, unemployment offices, Craigslist, newspaper ads, wherever we can find help,” he said, adding that well-qualified harvester operators are like free agents in baseball and football: in heavy demand and able to name their own price.

According to Owen, “a lot of quality employable” workers in the Gaylord area are signing on with oil and gas companies because of higher wages. And in the U.P., “there are pockets where skilled labor is going to the mining field because the mines pay more.”

The labor shortage does have a bright economic side for some workers willing to work more, she said. “These guys can get overtime – I have loggers paying 20 hours a week overtime.”

There are some recent initiatives underway to help close the labor gap.

“These are the nuts-and-bolts guys who walk in the woods and mark timber,” Perkis said. “There’s a real demand for these technicians.”

Seven students enrolled in its first academic year, and about the same number this year, Perkis said, adding that the college plans to market the program beyond the U.P. and northern Wisconsin.

In the Northern Lower Peninsula, the Industrial Arts Institute opened its first 15-week training program in welding, graduating 16 students in mid-November. The next class starts Jan. 6.

All found jobs immediately, including one who received 11 job offers, according to Marilyn Moran, who handles public relations for the institute. It was created by Moran Iron Works, a manufacturing company in Onaway that makes large modular steel products, including wind turbine components and barges.

The four graduates hired by Moran Iron Works started at $14 an hour. Two hired in the Charlevoix area started at $20 an hour. One went to a $100-an-hour job in the oilfields of another state, she said.

The genesis for the institute was the difficulty the company encountered as it expanded from 50 employees four years ago to 130 now, Moran said. “We couldn’t hire people fast enough to meet our need,” including welders and fabricators.

Obstacles included applicants who couldn’t read a tape measure and who lacked a work ethic – “showing up on time, having the discipline to work hard, go home tired and come back to do it again the next day,” she said.