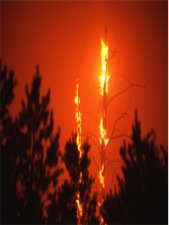 LANSING — Michigan has had an unusually small number of wildfires this year. Credit an unusually large amount of rain.

The largest fire that the Department of Natural Resources responded to was about 150 acres near the Indiana border.
Scott Heather, the assistant chief of DNR’s Forest Resources Division, said the past season “with all the rain” resulted in the fewest wildfires he’d seen in his 37-year career.

“Typically in a more normal fire season, our agency will suppress at least one that’s 1,000 acres or more,” Heather said.

That experience contrasts dramatically with the state’s largest fire in recent years, the 2012 Duck Lake fire in the Upper Peninsula, where, as DNR reported, a “then-small wildfire blew up and began its 11-mile run to Lake Superior.
When it was finally contained, it had burned 21,069 acres. Forty-nine residences, 58 outbuildings, two commercial structures and 26 campers were destroyed.”

Chief Patrick Parker of the Grand Traverse Metro Fire Department said, “We haven’t had a big wildfire season here in many, many years, and it would be weather-related.”

And although the three townships his department serves have “a lot of wild land,” not many structures abut that public land, reducing the risk of buildings being destroyed if a wildfire does break out, Parker said.

The Huron-Manistee covers about 1 million acres in the Northern Lower Peninsula, and its firefighting staff also has primary responsibility for blazes on another 600,000 acres of nearby state and private land.

A community protection plan has three major components: It identifies projects to reduce hazardous fuel that could feed a wildfire. It involves local fire departments, local governments and local law enforcement agencies. And it addresses measures that communities and homeowners can take to prevent fires and reduce damage.

DNR reports that burning debris caused 37 percent of this year’s wildfires as of Oct. 13. Campfires and power lines each caused 12 percent of wildfires. Other causes included smoking, arson, children, fireworks, equipment and lightning.

The plans are “an overview of the wildfire risks within a county and the resources in place. Then there’s an assessment of how they can improve by reducing the risk or increasing the availability of resources,” he said.

The plans can help local governments respond more effectively, Heather said. And some components may be as simple as adopting new county laws – for example, requiring future driveways in rural areas to be wide enough to accommodate fire equipment. Other measures could address problems in areas where lakes and streams freeze, limiting access to the water needed to fight a wildfire.

“The county has to decide they want one, need one and want to take on putting one together,” Heather said. Grants funded by the U.S. Department of Agriculture and its U.S. Forest Service can cover the costs of writing a county plan. “It doesn’t cost them anything, but they need to dedicate some of their staff to work on it together.”

DNR fire prevention specialist Dan Laux said all counties do “some level of planning and prevention,” even if there’s no countywide plan in place.

And some of the federal money usually used to write county plans will be used to implement projects identified in existing county plans, Laux said.

Even one good wildfire season doesn’t assure a similar situation in the future.

As Alpena Fire Chief Bill Forbush put it, “We don’t have a huge wildfire problem here, but we certainly have the potential here.”

That potential is even greater west of Alpena County, as in the Huron-Manistee National Forest with its large stands of jackpine.

“Jackpine is the most hazardous of the wildfires. They’re very, very combustible. They burn hot and they burn fast,” said Forbush, a past president of the Michigan Association of Fire Chiefs.

Forbush and Parker both said DNR’s firefighting support is essential and noted that the state’s fire chiefs had successfully lobbied the Legislature to provide more money for those activities.

And Parker said, “It’s good to see this past budget year that the Legislature allocated more funds to the firefighting side of DNR. They were pretty decimated.”