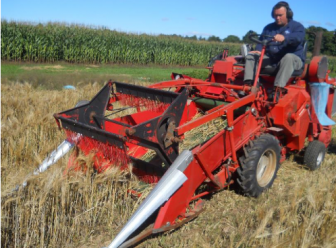 Michigan-grown barley is slowly making a comeback thanks to the state’s burgeoning craft beer industry.

“The number of breweries is growing, the amount of beer they are producing is growing and the amount of barley they use is proportional to that,” said Scott Graham, executive director of the Michigan Brewers Guild. “There is interest for it in Michigan and I’ve been working to encourage the reemergence of that as a viable business. There has not been much barley production in Michigan since the mid-eighties.”

To be used in beer, barley, a grain, must first be malted, a process that sprouts and dries the grain seed. Limited malting houses in Michigan are the biggest hurdle for farmers and brewers who want to produce 100 percent locally grown beer.

“Since we were able to get the hops market to grow, we are also trying to get good high quality barley to be produced in the state,” said Kapp. His Chatham-based center does crop and livestock research.

The expansion of hops and barley is a side effect of the craft beer explosion in Michigan.

“I think barley could become a significant industry when you look at how much Michigan breweries are making and the fact that you can grow barley in areas that other crops aren’t grown in,” Graham said. “It has the potential to have quite an impact on our agricultural industry.”

Barley has been growing in “little pockets all over Michigan,” Kapp said. It is primarily grown in the Upper Peninsula and northern lower Michigan.

Another spur to the commodity is an increasing interest in local ingredients in food and drink.

Having beer that is 100 percent locally produced is a big attraction for breweries, Graham said.

“Brewers do want to use local ingredients,” he said. “It is nice to feel like when you’re in Michigan you’re drinking local beer and supporting local efforts.” 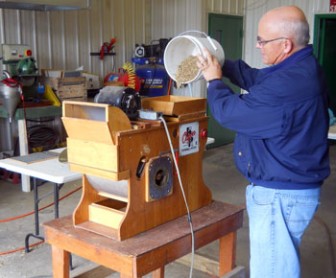 There are only two small-scale malting operations in Michigan, Graham

“A lot of farmers want to grow barley in the near future but until there is a market secured there is not a huge amount of growth,” said Ashley McFarland, center coordinator for the Upper Peninsula Research and Extension Center. ”I see this increasing if we can get a few more malt houses within the state on the ground and in production.”

Michigan hit an all time low in 2013 of 8,000 acres planted to barley after little to no production in the past 30 years, but farmers have expressed increasing interest, McFarland said.

“We have gotten 30 to 40 phone calls in the past few months from people wanting to learn more about growing barley,” she said.

“In the state of Michigan, barley that is grown for malt is minuscule, not even 1,000 acres,” she said. “Now we are going to keep better records. I would speculate that there is a small increase in growth because at the moment we do not have a huge capacity. There is a lot of potential for growth, but not rapidly.”

If more malt houses were to open, barley could be very beneficial to Michigan’s economy, McFarland said.

“With more malt houses comes more jobs and a better product,” McFarland said. “I think the economic benefit would trickle all the way down the production chain. We have over 150 breweries right now so there is a lot of economic potential out there and it could potentially become a big financial gain.

Some brewers are already using locally grown barley for single batches of beer.

“Certain brewers will do this as a novelty, but in those cases they do not have to be as sensitive to quality or cost,” Graham said. “If they use it all the time in mainstream business there is a question of competitive price and quality. We’re really early in the development of all of this, but I am optimistic that it will develop.”