Great Lakes mayors from the U.S. and Canada have ratcheted up the pressure on their federal governments to improve the safety of oil transportation across the Great Lakes and St. Lawrence River basin.

At the annual meeting of the Great Lakes & St. Lawrence Cities Initiative in Thunder Bay, Ontario, the mayors on Wednesday spotlighted the increasing dangers their cities face from oil transportation. They gave binational examples: The Enbridge pipeline spill in Michigan’s Kalamazoo River and the tragic Lac-Megantic, Quebec train derailment and explosion that killed 47 people.

The reaction on the part of federal governments and energy and transport companies to those devastating accidents …… has been slow and insufficient,” John Dickert, the mayor of Racine, Wis., said in a press release.

The mayors’ call for action follows similar alarm sounded by the Alliance for the Great Lakes, the National Wildlife Federation, the Council of Canadians and a contingent of U.S. senators. All have questioned existing safety precautions for oil transport in the Great Lakes region.

The Great Lakes Commission, representing U.S. governors and Canadian premiers, says it is preparing a brief that will evaluate the benefits and risks of oil transport to the region.

It’s not unusual for environmental groups and Washington politicians to speak out in the wake of tragedies like Kalamazoo and especially Lac-Megantic. It’s what they do.

Aren’t they supposed to focus on traditional city issues like crime, traffic and schools? Yes, and the Great Lakes and St. Lawrence mayors do that. But oil transport and its associated risks is literally in their towns. The costs of a transport failure are too high for the mayors to sit on the sidelines.

Besides, that’s not the style of this bi-national group. And they’re engaged not only on the oil transport issue this week. Climate change and adaptation is also top of the agenda. 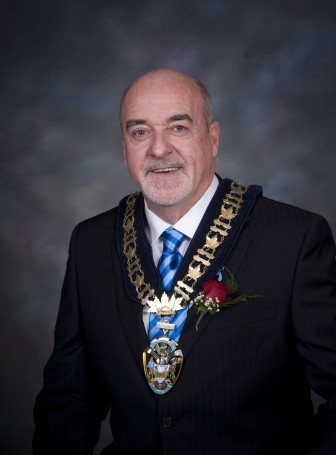 I asked Thunder Bay Mayor Keith Hobbs if that wasn’t politically risky. “Don’t your constituents want you to focus on traditional mayoral issues?” I asked.

I reached him with a phone call to the conference. He is the outgoing chair of the organization. And he was emphatic. Hobbs said that’s what citizens wanted until 2012 when Thunder Bay experienced a hundred year storm.

It “destroyed 5,000 homes…. and the wastewater treatment facility was 45 feet underwater… with a $45 million expense so far,” he said. “And there’s a lawsuit pending against the city for not being prepared for climate change.”

“There’s your answer,” he said.

Back to oil transport

I asked Hobbs why the mayors didn’t call for a ban on oil transport on the Great Lakes, at least until all of the safety issues are identified and resolved.

“We stopped short of calling for a total ban because we are calling for stringent regulations,” Hobbs said. The mayors will call for “the doubling of the lining for pipelines, ships and railcars.”

That’s disappointing and a bit out of character for this group which isn’t known for timidity. Where you end up often depends on where you start. Given the risks, it would have been prudent for the mayors to go the extra step and take the bold position of calling for a ban.

The mayors are the most engaged group of elected officials in the region. They easily trump the over-hyped Great Lakes congressional delegation and the Great Lakes governors. They’re willing to push past traditional constraints when it impacts cities – be it water conservation, climate change or the risky business of oil transport.

“We want to lead by example and do what we can,” is how David Ullrich, the executive director of the Cities Initiative, describes their work.

If government does nothing else, it has a responsibility to protect its citizens from natural and manmade disasters as best as it can. With their engagement on oil transport and climate change that’s what the mayors are doing. And they are leading by example.

When they finish their brief on the risks of oil transport maybe the region’s governors could take a look at the mayors’ playbook.

They may learn something.