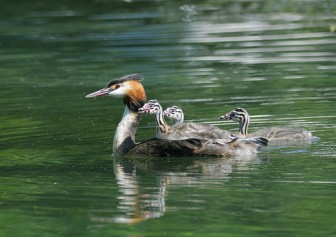 Grebes are among the species affected by the lessening of open water. Photo: Flickr/CC.

LANSING – Near-record ice and less open water on the Great Lakes are a growing concern for the safety of waterfowl in Michigan.

Licensed rehabilitators say they have seen a “profound” increase in reports of waterfowl stranded on roadways that they confuse with open water.

Once they land, some birds cannot take off again because their bodies are adapted to lifting off from water.

St. Francis Animal Hospital in Macomb County rarely deals with stranded waterfowl most years, but has already treated four grebes, two of which died, said Marilyn Kedzierski, a veterinarian at the hospital.

The Department of Natural Resources Traverse City Field Office has dealt with at least 20 to 25 incidents of waterfowl stranded on roadways this year, up from about one case a year, wildlife habitat biologist Steve Griffith said. Several were run over by cars.

“They could starve if they’re left there,” said Katie Keen, a Department of Natural Resources wildlife technician in Cadillac.

The increase in ice this year may have left waterfowl struggling to find open water, Keen said.

A high number of reports of stranded waterfowl have come in from across the state, Keen said. But reports from the Lower Peninsula aren’t surprising to one rehabilitator.

About three weeks ago, Jerry Maynard, the president and founder of Chocolay Raptor Center in Marquette County, noticed flocks of birds headed south and similar reports on bird observation blogs.

He said he hasn’t seen many waterfowl in weeks –a strange occurrence for an area that typically offers many bodies of open water.

If that’s the case, Maynard said birds could have stopped short of leaving the state if they saw what they believed was open water in the Lower Peninsula. As a result, some confused birds might have mistakenly attempted to land on Michigan roads they thought were water.

Grebes, mergansers and several species of duck have legs placed so far back on their bodies that they can only take off from water, not solid surfaces, Keen said. As a result, waterfowl that mistake shiny, icy roads for open water could face possible starvation without assistance.

The types of waterfowl with these concerns are known as divers, Good said.

“Divers on land are kind of like a rollie pollie,” she said, referring to pill bugs that roll their bodies into balls. “They can’t navigate.”

Because the animals are traumatized, Good said they aren’t applying their natural water-repellent oils to their feathers. Because they can’t move to attain food, they become dehydrated in addition to being hypothermic and starving.

Most waterfowl in the state should be safe from dangerous roadways because they fly south, said Kristin Schrader, communications manager for Ducks Unlimited. However, some that decided to stay after finding open water where they could eat earlier in the year might now be in trouble.

“They’re economical with their calories,” Schrader said. “The ones that stayed didn’t make the best decision.”

The especially harsh winter has put all wildlife at risk, Schrader said, adding that many birds that could have survived Michigan’s winter in previous years are now at higher risk of death whether they get stranded on roadways or not.

She said even typically warmer water near industrial plants has frozen to some extent, leaving limited choices for waterfowl hoping to find water.

If ice cover on the Great Lakes and inland bodies of water continues to grow, several experts said fatalities and incidences of stranded waterfowl could increase.

Would-be rescuers should carefully approach the animal to see if it can fly away, Good said. A bird thrashing on land could also be stranded.

If the bird is stranded, don’t try to rescue it but call a licensed rehabilitator through the county listings on the Department of Natural Resources website at www.michigandnr.com/dlr, Good said.

Even stranded birds can be dangerous, Maynard said. Asking a skilled rehabilitator to come to the animal’s rescue is the safest option.

If people believe a bird needs to be immediately removed from the roadway, Maynard suggested wrapping it in a jacket and carrying it firmly but not too hard.

Good said the bird can be picked up and placed in a container with towels or blankets. The animals should be warmed and given water, but not food because the animal’s digestive system likely cannot process it.

Uninjured birds should eventually be reintroduced to open water, Good said. Rehabilitators and bait shop owners could likely direct people to these locations.

However, people should consider bringing these animals to licensed rehabilitators that can expertly judge whether an animal is healthy enough to return to open water immediately, said Kedzierski of St. Francis Animal Hospital.

Animals should immediately be returned to open water or taken to a rehabilitator because it is illegal to house migratory birds, Griffith said.

The winter’s hazards for waterfowl should not have a significant impact on the ecosystem, Good said.

“But it makes a difference to the birds that you do find,” she said. “There’s something in that.

One thought on “Waterfowl confuse roads with water”