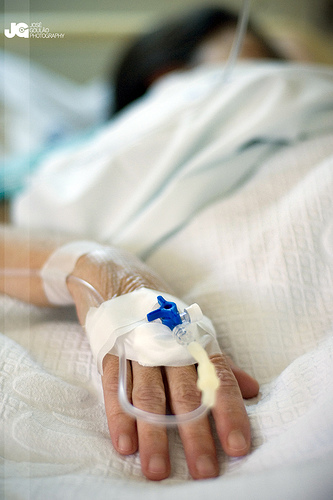 An increase in heat-related illnesses can be a consequence of climate change. Photo: Jose Goulao/Flickr CC.

The Michigan Department of Community Health has put together the Michigan Climate and Health Adaptation program to prepare for any health risks the climate change may bring.  The program was recently renewed with a grant from the Centers for Disease Control.

The unusual weather brought on by climate change can have health consequences that range from something as minor as dehydration to as serious as a West Nile virus outbreak, said Angela Minicuci, a public information officer for the state health department.

“Our primary goals are that climate change will be recognized as a public issue and integrated into a public health practice,” said Dominic Smith, the state health department community health educator.

This program assesses what the public health consequences of a severe climate change would be and works with partners in local health departments to be prepared for changes related to health climates so they are able to respond appropriately, said Minicuci.

The program began in 2009 with a grant from Centers for Disease Control and Prevention, which was renewed for another three years in 2013, according to the health department’s website.

While the health department has been working with counties such as Ingham and Washtenaw, many counties are without a plan.

Local health officials of Grand Traverse, Macomb, and Marquette counties said that they did not have particular plans in place to deal with health risks caused by climate change, but would deal with them on a case-by-case basis.

All health risks mentioned by the health department are expectations, as health officials have not yet seen any long-term trends directly related to climate change, Minicuci said.

But experts say it’s a matter of time.

“The major issues around public health for the southern part of Michigan are generally having to do with heat waves and relief from them, as well as different diseases migrating up from the south,” said Daniel Brown, a research associate with the Great Lakes Integrated Sciences and Assessments Center, a center operated by Michigan State University and the University of Michigan that studies climate change adapation.

State health officials measure how residents respond to extreme heat, study how they can travel  to cooling centers and what ways residents are informed about the weather, Smith said.

In the summer of 2012, extremely dry weather,  caused a drastic increase in West Nile virus cases in Michigan. The health department recorded 202 cases and 17 deaths that year, as opposed to 2011 where there were 33 recorded cases and two deaths.

If dry summers become a trend, we would see a lot more West Nile cases, which would be a concern, Minicuci said.

“We expect to see more threatening hot days with less relief, but haven’t seen the trend grow for Michigan yet,” Brown said.

“If something like West Nile hit hard because of climate change, we’d want to have tools in place to raise awareness, stop cases from going up, and get out forms of treatment,” Minicuci said.

The clearest signs of climate change are increases in extreme precipitation, said Brown. The heaviest storms are getting heavier and becoming more frequent.  The average annual precipitation rate for Ann Arbor, for example, has increased by 25 percent.

“With more storms and flooding we would expect to see water contamination and waterborne disease rate increase,” Minicuci said.