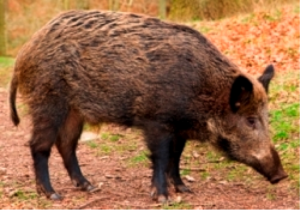 Feral swine are known to infect farmland pigs with a variety of diseases that are usually kept well under control in the commercial swine industry. Photo: Michigan Department of Natural Resources.

The number of feral swine significantly decreased according to Department of Natural Resources (DNR) reports but at least one interest group says the numbers are wrong.

The report shows three counties – Mecosta, Midland and Saginaw – had the highest numbers of feral swine in 2012.In 2012, there were five sightings and 16 killings of wild swine in Mecosta County. So far this year, the number dropped to no sightings and only six killings.

In the three counties with the most animals, more than 40 feral swine were reported in 2012 in contrast to fewer than 10 this year.

Mary Kelpinski, executive director of Michigan Pork Producers Association, based in East Lansing, said there is a different explanation for the lack of reported sightings and killings.

“The problem is really growing,” Kelpinski said. “It’s just hard to get people to report if there is a sighting — I think in some areas it’s getting to be common.

“The info you’re seeing are just confirmed sightings — many will see the pig and not report it. Unfortunately, the population of pigs seems to be growing.”

“They’ve been known to carry quite a few diseases, all diseases we’ve eradicated from the commercial swine industry, and we really want to keep our pigs healthy,” said Kelpinski. “These feral swine can run around with diseases and make our pigs sick.”

Feral pigs are known for destroying land as well, she said.  From golf courses and residential property, they have moved to agricultural land.

“They dig up a lot of cropland up in the northwest part of Mecosta County.  They’ve had quite a problem in the potato industry. They’ve gone in and dug up the fields,” Kelpinski said. “Same for cornfields — you lay down the seed and they’ll go right in in an evening and destroy acres and acres of planted land.

Wild pigs are also a problem for natural resources because they are known for attacking small fawns and ground birds, said Kelpinski. They will also compete with native species for food, such as acorns, taking it from smaller animals.

There was a release of feral swine in Midland County in the mid—2000s, and the problem grew from there, said Tim Wilson, a wildlife biologist with the DNR.

The main goal now is to control or eliminate the swine population to avoid the type of considerable hog damage that has been found in Texas and Florida, he said.

It’s difficult to get rid of feral swine due to their elusiveness, said Amy Trotter, resource policy manager at Michigan United Conservation Clubs.

The hope is to eliminate them rather than just learning to cope with the problem, said Kelpinski.

“We want to be really aggressive in Michigan. If you can get ahead of an invasive species, you can actually have hope,” Trotter said. “It’s when we come in way too late that it’s a matter of management rather than control and elimination. If we can’t eliminate, hopefully we can control them so their population doesn’t get out of control.”

To help keep them under control, the DNR is asking hunters to shoot a feral pig when they spot it, Wilson said.  Hunters need only a regular hunting license.

4 thoughts on “Michigan’s feral swine numbers are dropping… or are they?”