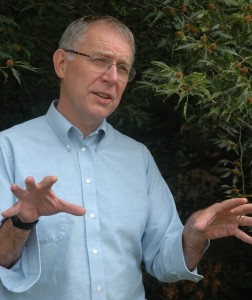 Cool water pooled in the space between the small of my back and my wetsuit as I drifted face down in Tennessee’s Tellico River.

The minor discomfort was forgotten as a dark-striped fish with a bright orange belly erupted from a hole in the rocky river bottom below.

Pat Rakes, co-director of Conservation Fisheries, Inc. in Knoxville, spit out his snorkel and gleefully sang out, “A tangerine darter, two of them.”

Indeed, there were — and more. A school of Tennessee shiners appeared with bright green neon stripes rivaling the glitz in the tropical fish section of a department store.  And below them lurked large, dark-green chubs with thick scales and orange-tipped fins.

As part of the recent Society of Environmental Journalists’ annual conference in Chattanooga, I was treated to an emerging ecotourism venue: Snorkeling freshwater rivers.

Tennessee is a good place for it. The southeastern United States contains 55 percent of North America’s freshwater fish species, a statistic constantly cited by our tour leader, Anna George, director and chief research scientist of the Tennessee Aquarium Conservation Institute. The Cumberland, Tennessee and Mobile river drainage systems contain almost half the fish species found in the U.S. and Canada. 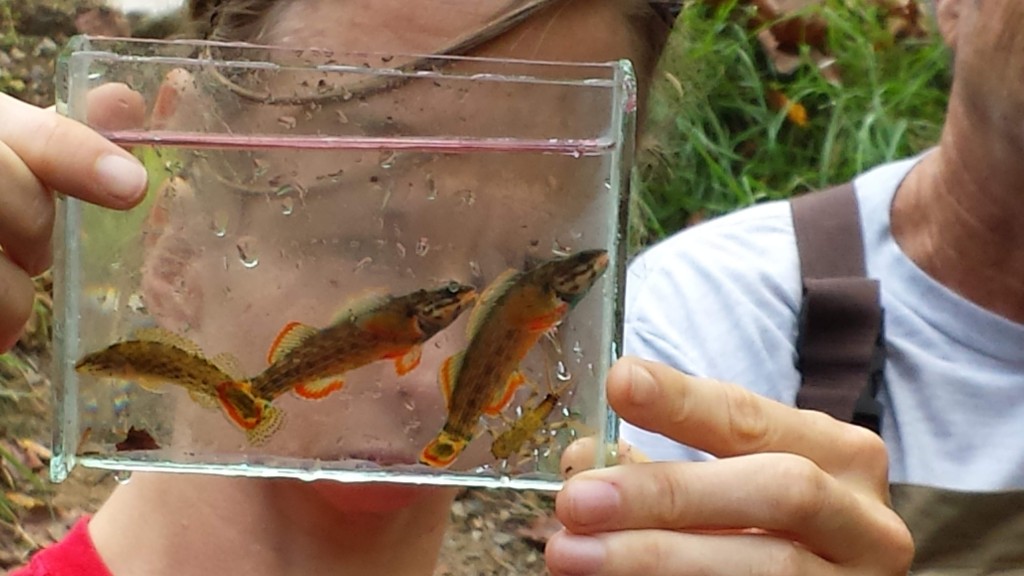 That means that there are a lot of different kinds of fish in a relatively low volume of water.

George’s nickname where she works out of Chattanooga’s popular Tennessee Aquarium is the sturgeon general. The aquarium has a significant series of exhibits on sturgeon, sort of the charismatic mega-fauna of freshwater. It’s a prehistoric, endangered and large fish that excites the public about preserving freshwater species. At one of the aquarium’s displays you can even touch them.

But it’s out here in the rivers where she sees the greatest opportunity for engaging the public in conservation efforts. Most people, even those who live right next to the water, haven’t a clue as to the colorful diversity lurking below, she says. 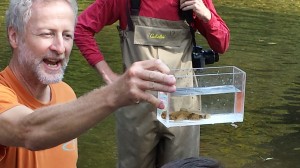 Our destination had been the Cherokee National Forest where the U.S. Forest Service operates snorkeling tours of the Conasauga River. For $20 you get use of snorkels, masks and wetsuits and a guided tour of the river’s biodiversity.

We never got there. Our plans changed when the shutdown of the federal government cost us the use of federal guides and access to the forest. But the chance to impress about 15 journalists from around the nation was too good to miss. George and her crew at the Tennessee Aquarium, and with the help of experts like Rakes at Conservation Fisheries, scrambled to arrange equipment and access to the Tellico, a river in an entirely different watershed but one that is equally rich in aquatic diversity.

Ecotourism is hardly a new phenomenon. But how large of an economic impact river snorkeling might have is anyone’s guess. The restaurant adjacent to where we put in did a pretty good business in milkshake sales the day of our visit.

That may be a nice benefit, but regardless of the economic impact, the educational impact is huge, George said. She and other guides quickly explained the diversity of the fish we encountered, the threats to their existence, the recovery of some of them and plans for yet more conservation work. 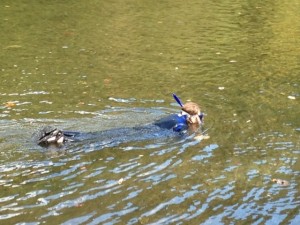 A snorkeler surveying the waterscape of the Tellico River in Tennessee. Image: Clint Wilder

These rivers are relatively unsullied by the point source pollution of factories that elsewhere left a legacy of hard to clean polluted sediments. They were harmed primarily by logging which allowed soil to run off the land and muddy them, Rakes explained. Now that the loggers are gone, the land is recovering — particularly on national forests.

So too are the rivers.

The greatest impediment to recovery is the lack of funds to restock the rivers with their native species, George said. River snorkeling can build the public support for that kind of investment.

Watching fish is not unlike watching birds. In fact, our guides did both. With eyes below water and ears above, they often called our attention to bird calls.

Seasoned birders could check species off their life list while starting a new list below water. Fish behavior is equally fascinating and surprisingly similar to that of birds.

Some species build nests of stones that rival the size of the fish, Rakes said. Others lay their eggs in those same nests, hoping that they might survive the onslaught of yet other species that scavenge nests for eggs to eat.

Some fish even have specialized appendages for upending stones in the search for food.  Others skulk under rocks for protection. And their colors, particularly during spawning season, are amazing. Just like with birds, the males steal the color show. 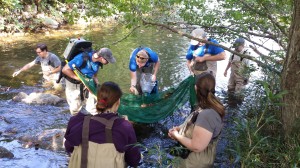 We crawled as much as floated through the shallow water. You have to be careful because disturbing sediments could cloud the view for others.

But it also stirs up food for the fish.

It’s sort of like seagulls following a tractor plowing up earthworms.  Ahead of you there may not be a single fish; turn around and you may see a long trail of them.

And it wasn’t all fish on this tour. Southeastern states contain 90 percent of all freshwater mussel species and 87 percent of all crayfish species. Salamanders reach their highest levels of diversity worldwide in the southern Appalachians — there are are least 30 species of salamander in the Great Smoky Mountains National Park.

One of our guides on our trip found a baby hellbender salamander. We all “zombie-walked” across the stones and through the current to get a good look of the creature cupped in his hand.

The hellbender can grow more than two feet long. But despite its size, it’s disappearing — particularly in rivers where tubing is popular, George said.

One theory: Drifting in tubes is a popular activity among college students. Women of that age are among those most likely to be on birth control. And their urine can contain hormones that may inhibit the sensitive hellbender’s reproduction.

It’s the opportunity to tell such stories and educate the public broadly on conservation that excites George about the rise of river snorkeling.

Can you love this resource too much?

When asked if the activity could become so popular that it endangers the fish and their habitat, she pauses.  Divers have damaged coral reefs by intensely examining the diversity of life there.

It’s a danger worth considering. 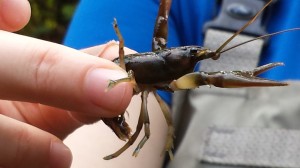 But river bottoms are more resilient than coral reefs, George said. And the tourism activity is nowhere near as intense.

Right now the educational opportunity that creates support for biodiversity conservation far outweighs any real or potential threat to the resource from snorkeling, she said.

Meanwhile, new frontiers of freshwater exploration beckon. As we begin to pack up the gear and head back, one of our guides notes: “You ought to come back at night. The catfish are amazing.”

4 thoughts on “Upending the basin: Can freshwater snorkeling promote preservation?”