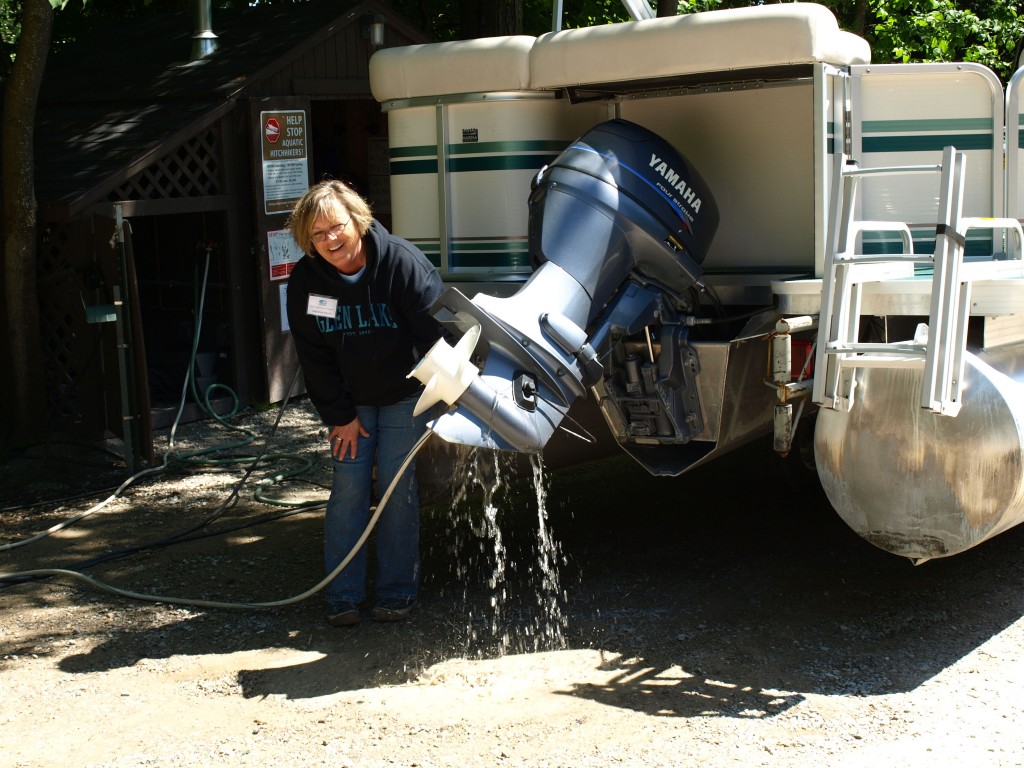 The front line of defense against invasive species in two northern Michigan lakes is a hose and a lake association that knows how to use it.

The hose is part of the Glen Lake Association’s boat-wash program at Big and Little Glen lakes in the northwestern Lower Peninsula. It uses a warm-water spray to clean the hull and flush the engine of boats that might be transporting invasive species from another lake.

Begun in 1994 and one of the longest-running programs in the state, it will likely wash close to 4,000 boats during the 2013 season alone.

The effort is paying off. While the Great Lakes and other lakes across the state struggle with a collection of non-native species that can affect fishing, swimming and lake ecology, Big and Little Glen lakes are nearly invasives-free.

“We don’t have any of these things,” said Sarah Litch, who is on the Glen Lake Association boat-wash committee.

The boat wash is a simple operation. Vehicles trailering a boat pull up to the station, a little wooden shack at the Department of Natural Resources public boat launch that services the two adjoining lakes. A boat-wash worker asks the driver if the boat has been in another lake in the past 10 days.

If so, the worker sprays off the hull and trailer with heated water and flushes the engine to remove or kill hitchhiking species that might still cling to life there. The worker asks drivers if they are bringing in bait minnows. Store receipts are checked to verify that the minnows are virus-free and not a potential source of the deadly infectious fish disease called viral hemorrhagic septicemia.

The entire process takes less than 5 minutes.It’s a free service.

A quick explanation about the importance of the program is all it takes for most boaters to consent to the wash.

“It doesn’t happen frequently, but there are some people who come through who are not sure about us washing their boat or, in particular, flushing their engines, although we’ve all been trained by a marina and know what we’re doing,” said Sallyanne Morris, who coordinates the volunteer and paid boat-wash staff and frequently works at the station.

Workers can pull out the big guns: an ordinance that carries a $500 fine for boaters who refuse to have their boats washed. Litch was behind the drive to get the ordinance passed in all three of the townships that have jurisdiction around Big and Little Glen lakes.

“The ordinance is a huge backbone to this program,” Morris said.

For the most part, however, people are happy to participate even when the station isn’t manned, she said. “We’re here from 6 a.m. to 7 p.m., and when we close for the day, we have a sign posted with all the instructions for how they can wash their boats themselves. When I get here around quarter to six the next morning, I can tell that people have used the self-wash because the ground is wet. People are complying.”

About 20 miles south of Glen Lake, Crystal Lake now has a free boat wash, too.

“When the DNR put a new boat launch in here, we got them to add a little side drive and allow us to put in a boat wash,” said Joel Buzzell, president of the Crystal Lake and Watershed Association. “Then we spent the last couple of years raising about $50,000 for a boat-washing station, and it opened on Memorial Day weekend this year,”

The money covered the station building and equipment.

The already well-established boat wash on Little Glen Lake costs about $29,000 a year to operate.  The funds  all come from lake-association dues. They  cover staff, utilities and insurance.

She compared it to the far higher amounts that can be required to remove invasive species after they have already infiltrated and spread. Millions of dollars have been spent at Houghton Lake to treat Eurasian milfoil, which had grown into vast beds, she said. “Looking at milfoil alone, the $29,000 we spend is a pittance compared to the cost for fighting just that one species in your lake.”

Prevention is especially important for lakes like Big and Little Glen because of their location.

“They’re just a sand dune away from Lake Michigan,” said Hampton Hobson, supervisor of the DNR Parks and Recreation Field Office in Grawn. The Great Lakes harbor 184 species of non-native fishes, plants and other organisms, and many of those could easily be inadvertently spread to the Glen lakes. 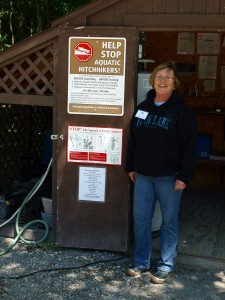 In spite of the risk of invasives, most public launch sites do not have boat washes. The state boat launches are no exception. Jordan Byelich, state waterways development program manager of the DNR, counted only two others on the state’s Parks and Recreation Division launches: one at North Higgins Lake State Park and one at Emmet and Cheboygan County’s Paradise Lake. A few other local parks may also run washes, he said.

“I wish we could add more of them, especially in high-use lakes,” said Roger Eberhardt, senior environmental quality specialist for the Michigan Department of Environmental Quality’s Office of the Great Lakes. Washes at popular sites would do more than protect those specific sites, he said. They can also get boaters thinking about what they can and should do at other lakes, and perhaps help encourage more boat-wash programs.

“Some of our very best work is done by volunteers who care and take action on their own,” he said.

A boat wash is in the best interest of any lake association, said Buzzell. It benefits lake users and the local economy.

“We just felt like it’s not one of those things we could take for granted and just say, ‘I wish we would have.'”