Not the physical system, but the organizational landscape that has been part of the Great Lakes citizens’ movement for three decades. With only a few days of public notice, Great Lakes United–the only binational coalition organized around Great Lakes environmental protection–closed its doors and turned off the lights.

It was a sad day for the Great Lakes.

Thirty years ago organizations in the Great Lakes region came together, realizing that issues that spanned the region and transcended national boundaries could be better addressed through coalescing the capacity of multiple organizations with varied missions that shared a common concern for the Great Lakes. They were building on regional momentum rising from the work of the International Joint Commission, whose advisory boards on science and water quality were authoritatively revealing the widespread, scary effects of toxic pollutants on Great Lakes fish and wildlife, the scale of solutions needed to address the nutrient pollution that had choked Lake Erie and much more.

The initial push for a new citizen’s alliance came from groups such as Michigan United Conservation Clubs and New York’s Save the River, brought together in part by common concerns about winter navigation on the connecting rivers of the Great Lakes-St. Lawrence watershed.  But winter navigation just scratched the surface of a growing list of worries about the lakes.  Those that participated in the early organizing meetings were concerned about PCBs and other pollution contaminating the food web, toxic hot spots like Love Canal, periodic threats to divert or pipe Great Lakes water elsewhere and a very long list of other issues. 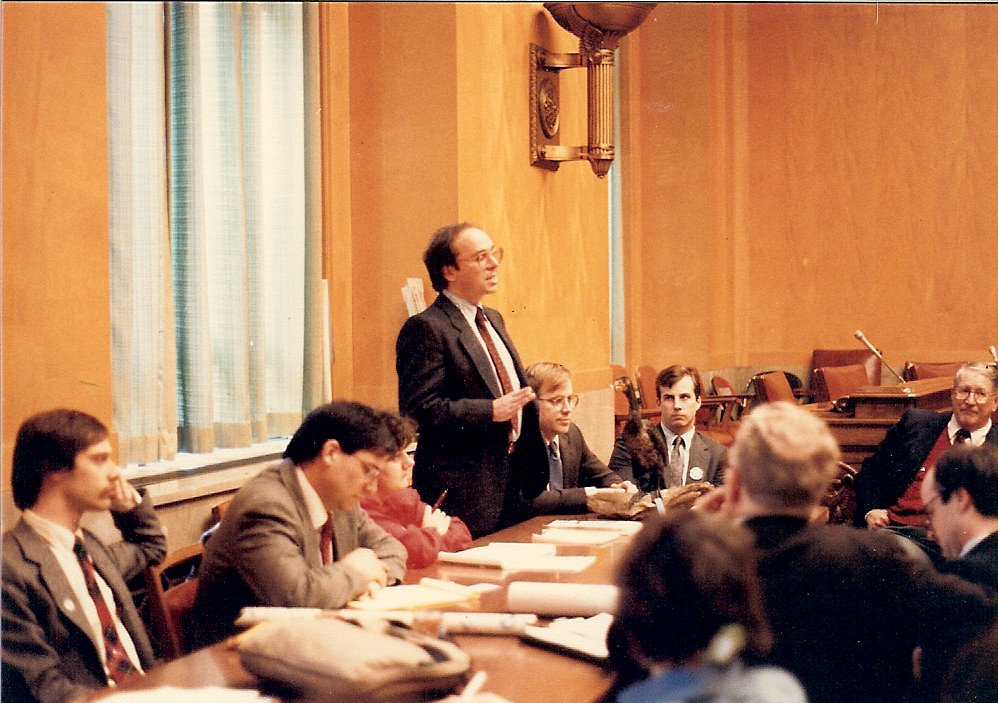 Great Lakes United member John Jackson, standing, testifies at a Congressional briefing on bioaccumulative toxic compounds in the Great Lakes in 1988.  Also in picture are Kai Millyard, far left, of Ontario’s Pollution Probe,  and Tim Eder, to the right Jackson, who was GLU’s field coordinator then. Eder is now executie director of the Great Lakes Commission.

Love for the Great Lakes makes strange bedfellows, and some of the most unexpected allies included uber-sportsman Tom Washington of Michigan United Conservation Clubs, and Save the River’s Barry Freed, who was actually Abbie Hoffman working under an assumed name.  Add into the mix the United Auto Workers and  the regional offices of national organizations such as the Sierra Club, National Audubon Society and National Wildlife Federation. Include also  numerous state, provincial and local conservation and environmental groups from duck hunters to national lakeshore advocates, as well as scientific associations, tribes and first nations.

After a “test the waters meeting” at Mackinac Island, these and other players struggled through an embattled organizing meeting in Windsor. It was  rife with intrigue, factions and a threatened walk-out by Abbie. These passions were largely aroused by firm, but divergent beliefs about what we thought would make the alliance effective. We were all quite desperate for this coalition to be effective; we just didn’t all share the same notions about organizing, sharing power and engaging allies.  Yet in spite of the organizational fireworks, or perhaps because of them, a diverse, complicated coalition emerged. With little debate about the name, Great Lakes United was born.

I was heading up the Sierra Club’s emerging Great Lakes program in those days, and as Great Lakes United grew, we became solid allies. We launched Great Lakes Washington Weeks in 1986. Our organizations brought leaders from throughout the basin to meet with EPA and other federal agencies, the State Department and to testify before Congress and meet with members of Congress.

A toxic buffet for Congress 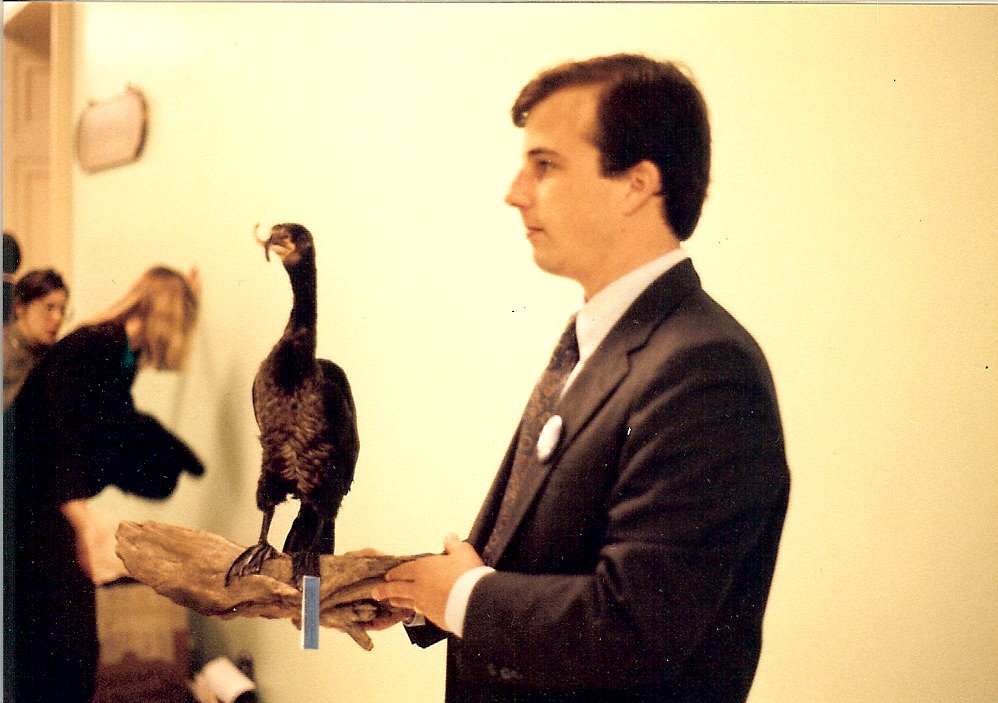 reception with 100 percent of the food and drink catered in from the Great Lakes, including the drinking water (labeled by source lake) and beautifully prepared Great Lakes salmon, lake trout and sturgeon –  all lovingly presented with the official fish advisories warning about the toxic contaminants likely to be in their flesh. We figured if thousands of people eat these fish back home in the districts, why not let them be savored by those on the Hill?

Great Lakes United — which quickly became known as GLU – also helped us bring in Cosmo, the living but tragically deformed cormorant, who made a spectacle of herself sunning her wings in the television lights while scientists testified about the impact PCBs have on fetal development in fish-eating birds.

For me, those were some of the glory days for Great Lakes United.  As a community of leaders and constituents, we helped strengthen the Great Lakes policy in the U.S. Clean Water Act and the Clean Air Act. We secured funding in the U.S. and Canada for research and monitoring programs and GLU played a major role in advancing provisions within the United States-Canada Great Lakes Water Quality Agreement during the 1987 revisions. They held 19 citizens hearings around the basin where thousands of people spoke out.  GLU used that citizen testimony to stimulate changes to tackle tough challenges such as the contaminated sediments at the bottoms of harbors and other toxic hotspots in the region and airborne sources of toxic pollution–one of the largest sources of food web contaminants.

A spur for binational action 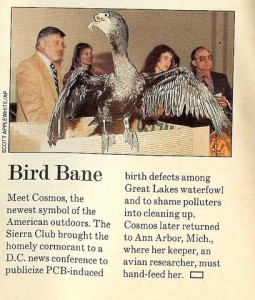 This scan of Life Magazine, May 1989, shows Cosmo, a Great Lakes cormorant born with a twisted beak, who was used by GLU officials to push Congress for tougher pollution regulations. From left are EPA researcher Wayland Swain and Jane Elder. Jim Ludwig, far right, was the scientist leading much of the research on birth defects, egg failures and related issues in colonial shorebirds at that time.

GLU and its allies also played a major role in the biennial meetings of the International Joint Commission, which became an extraordinary gathering ground for Great Lakes advocates. The independent commission’s water quality board and scientific advisory board played a unique and perhaps unanticipated role in speaking environmental truths about the Great Lakes to the powers of the two nations that comprised it.   No administration wants to be held accountable to the critiques of an independent body.

While environmental groups were applauding the environmental improvements in the ‘87 Agreement, they didn’t anticipate how the administrative changes–giving a larger direct role to each nation’s lead environmental agency–would eventually neuter and subsume the gravitas of the formerly august IJC.  At the same time, industry groups were organizing to quiet the boisterous citizen advocacy at the biennial IJC meetings, and the binational framework began to unravel in the 1990s.

The binational community was so much a part of the movement of those times, and it defined the “why” of Great Lakes United.  After 1987, the U.S. EPA and Environment Canada, under various administrations, kept up the diplomatic dialogue across the border.  But without having the two nations’ feet held to the fire of the IJC’s public review process and the critique of its water quality and science advisory boards, the binational agenda and the organizations devoted to it began to lose ground.

Still, with grit and determination, GLU held on for two more decades.

But the times and the movement were changing.  In the United States, much of the last decade has been focused on securing federal funds for Great Lakes restoration and cleanup, while the agreement and its leadership community were increasingly considered irrelevant to domestic action. Ironically many of the restoration priorities, such as finally cleaning up the list of contaminated harbors known as “Areas of Concern,” were established long ago through the mechanisms of the IJC and grassroots involvement in both nations.

Last year the United States and Canada renewed the water quality agreement, but the capacity for advocacy groups to engage in this process was a mere shadow of what it had been in 1987, with foundation support and the capacity of most domestic organizations focused on other priorities.  Great Lakes United stepped up to provide a base for collaboration and coordination, but with bare bones resources.

The U.S. negotiating team had no interest in engaging non-governmental organizations at the level they did in 1987.  The new agreement, stripped of its deadlines for progress and even its list of priority pollutants, looks like an agreement negotiated by agencies, not one driven by the people of the nations that embrace the lakes.

It’s not a bad agreement, but it isn’t a great one.

GLU has played an important role for the Great Lakes and global freshwater protection over the past 30 years. I and many others are sad about its end. The loss is another indication that the binational esprit de corps that was so important in forging Great Lakes strategies since the first Great Lakes Water Quality Agreement in 1972 is further slipping away.  While there are many other fine organizations working on behalf of the Great Lakes, GLU provided a home base for a binational vision and teamwork that is unlikely to be carried forward by other organizations whose primary focus is on policy in their own nation.

Cooperation across the border is great, a mission that transcends the border, however, is unique, and will be missed.

Organizations, like organisms, have life cycles, and the times and circumstances have changed, and the policy culture is vastly different now than it was when an embattled but committed group of us launched Great Lakes United at that storied meeting in Windsor long ago. I was proud to be there at the beginning, and proud of the many who have carried it forward for so many years against increasing odds.

Nature abhors a vacuum, and I hope that this unique niche will be filled again by a new generation of impassioned leaders who see the lakes as neither U.S. lakes, nor Canadian lakes, nor even as lakes of the First Nations or Tribes, but as the greatest freshwater treasure on the planet whose stewardship depends on our common vision and action.

Meanwhile, bon voyage to friends and colleagues who have shared GLU’s journey. I wish you all well.

17 thoughts on “Farewell to Great Lakes United — what now for bi-national citizen leadership?”