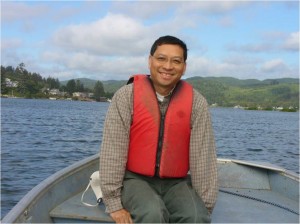 When Oregon State University professor Sam Chan was invited to attend a spring release party at his fourth grade son’s classroom, he assumed it had something to do with school getting out for summer.

Instead, Chan’s son and his classmates were releasing into a local stream the crayfish they had raised during the school year.

Chan then noticed what  would inspire his future research — the crayfish weren’t native to Oregon, but to the Ohio River Valley.

“It alerted me to the fact that teachers may be releasing nonnative species, and they likely don’t know it’s illegal,” said Chan, who studies invasive species with the Oregon Sea Grant. “And if this is occurring in my son’s classroom, where else is it happening?”

The concern is that classrooms releasing pets or science projects may be opening a new pathway for invasive species. And among the places they are getting released is the Great Lakes region.

Last year Chan and his fellow researchers at the Sea Grant surveyed nearly 2,000 teachers from Canada and the United States. British Columbia, Ontario and states such as New York, Indiana and Illinois were among those surveyed in the Great Lakes region.

The survey also revealed that 27 percent of teachers release the species they raise. About 35 percent send the organisms home with students. Only 20 percent said they are willing to euthanize them.

Plants and animals studied in classrooms come from a number of sources — large supply houses, plant nurseries, pet stores or even the wild. They are then often raised with the guidance of curriculum from online resources.

The problems stem from a dangerously unorganized process, said Chan.

“Every state has different lists of which species are permitted to sell and which are prohibited,” Chan said. “But there’s no easily accessible database for buyers or suppliers.  There are so many different plants and animals available it’s hard for the states to keep up, and at the same time the teachers believe it’s part of a national curriculum.

“They mistakenly assume that if an organism is for sale it’s probably legal — they assume somebody’s checking, somebody’s regulating it,” Chan said.

There needs to be efficient statewide databases to give schools guidance on which species they should raise and what shouldn’t be released, Chan said.

Researchers from Sea Grants throughout the country are also developing educational materials to help. 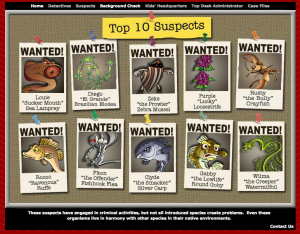 “We have a website called Nab the Aquatic Invader, and it’s a national website with invasive species education,” said Robin Goettel, associate director for education with the Illinois-Indiana Sea Grant. “We have a section for students and one for teachers, and in the teacher section we have the different classroom resources we developed.

“We also have posters and information cards we put out at science teacher conferences on proper disposal, what can be done without letting a species loose,” Goettel said.

One effective solution is to take the class pet to a veterinarian to be euthanized, Chan said. But that is a touchy subject.  The survey showed that teachers are evenly split on that tactic.

There are also issues of miscommunication at the suppliers’ level, said Chan.

“Often these animals are labeled generically — the shipment will arrive reading ‘Crayfish’ with no information about where it’s from and where it’s native to,” Chan explained. “They are shipped through the school district, but few things are checked.

“It’s hard to place blame, because the suppliers do try,” Chan said. “It’s hard to know what species they have — they’re harvested by someone and there’s often a variety of species mixed up in a harvest. Then these organisms aren’t even shipped with their scientific names.”

To help clear up that confusion, key points on the Illinois-Indiana Sea Grant website include which species to use, what damage can be caused by release, which plants and animals are native to a given area and options for what to do with unwanted plants and animals, Goettel explained.

There’s also an adoption pledge for parents, students and teachers to sign that provides guidelines for taking a class pet home. They pledge to take proper care of the animal and never release it into the environment.

Researchers from the Illinois-Indiana Sea Grant are also putting together Power Point and video presentations to be used as part of their invasive species web curriculum. 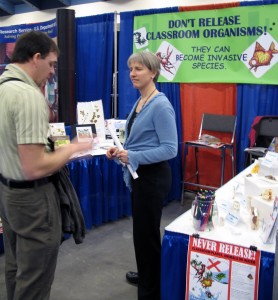 “Raising a species in the classroom is such a good way to connect students to the outdoors and the natural world, especially for communities that can’t afford consistent field trips,” Chan said. “But the school pathway right now is viewed as a minor pathway for invasive species, and that isn’t the case.

“Take the Great Lakes,” Chan said. “Many invasive species there have come from ballast water and recreational boating and fishing. But that’s much more controlled now.”

That’s not true of classroom science projects, he said. “This pathway is prevalent — there are schools in every community.”