A 13-year-old boy, beanie hat covering his shaggy hair, practices grinding his skateboard down a handrail in a busy urban neighborhood until a police officer chases him away. 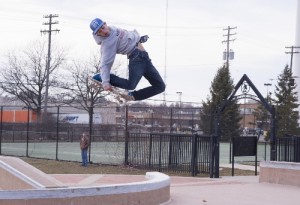 Skateboarders’ love of skate spots, like this one in Lansing, Michigan, leads to a heightened care of these environments. Photo: Kristen Oliver.

But skateboarders are agents of an alternative type of sustainability, according to a recent article published by the academic publishing company Taylor and Francis and written by Francisco Vivoni Gallart, visiting assistant professor of sociology at University of Illinois at Urbana-Champaign.

Vivoni Gallart argues that whether consciously or not, skateboarders promote sustainability by caring for the oft overlooked urban structures and surroundings that foster their passion. This is demonstrated, he says, through both general concern for keeping urban environments clean and usable and specific practices like applying wax to upkeep ledges and rails.

How did you decide to pursue this idea; what inspired you to view skateboarders as instruments of sustainability?

FVG: You know, it started with personal experience as a skater in my teens, and now as an aging and ailing skateboarder. From the beginning, I knew there was something anti-authoritarian and edgy about the practice but I couldn’t really put my finger on it until later in life when I did my research as part of my dissertation. My main focus with this research and trying to understand the subculture of skateboarding is to try to challenge key assumptions of skateboarding as just juvenile delinquency, and looking at skateboarding as a creative expression and performance.

And that performance is politically charged. Whether a 13-year-old can put that message into words or not, or whether they know it or not, they are in the process of challenging the motive of the city in terms of capital accumulation and social control. 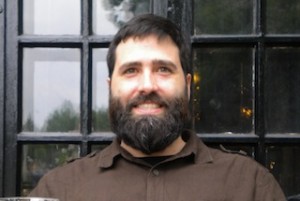 Vivoni Gallart equates the act of skateboarding to a concept of sustainability. Photo: Francisco Vivoni Gallart.

When you describe the components of skateboarding and alternative sustainability— you emphasize the idea of an “ethic of care” for the built environment and making use of that built environment for something it’s not designated for. Can you explain that further?

FVG: Actually, I borrowed the concept of ethic of care from feminist research; it’s an odd place to find inspiration for studying a male-dominated practice like skateboarding that does tend to exclude women. But it was a great source of inspiration — I see that skateboarders have a specific way of looking at built environments and that requires preservation and the upkeep of certain skate spots.

I argue that they take on a type of sustainability that is not driven by profit, it is driven by pleasure or fun. Skaters are always on the move, looking towards the next great skate spot, and they must upkeep all of their spots.

In the broad sense, when we think of sustainability, we think of preserving wildlife, forests, animals and conservation. For skateboarders, their conservation comes on a very focused scale — staircases, ledges, handrails, curbs. And the way in which I found inspiration to think about this comes from trends in skate park building today. What’s interesting about contemporary skate parks and skate plazas is that they have become museums of extinct skate spots. 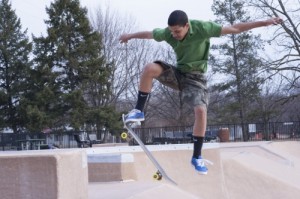 Vivoni argues that skateboarders like these are agents of change. Photo: Kristen Oliver.

From there, it’s only then a short leap to understand the street skater as taking part in a conservation effort, and of having a particular emotional and visceral connection to certain environments and doing all he can to conserve that environment for its illicit and unforeseen use.

In terms of traditional environmentalism, do you think that most skateboarders you’ve encountered seem to have a high level of awareness for that?

I would say no more [than the average person], but within the skateboarding industry there are some companies and businesses that focus on making boards that are sustainable. Also within the skate park design and build community, there are efforts to make parks that [have environmentally sound features]. I’m not sure if on a day-to-day basis that plays out, but from an industry perspective. Some people shaping the way skateboarding will look in 20 or 30 years — they are trying to incorporate environmental sensibility.

One thought on “Sustainable skateboards”