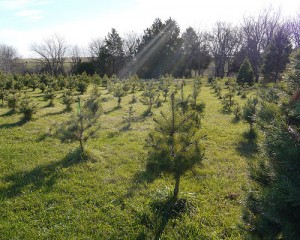 For tree farmers, the brunt of 2012’s summer drought may not be felt for 8-9 years. Photo: proforged (flickr)

Ken Prince, owner of KP Tree and Nursery in Allendale, is one of many Christmas tree growers in the state who faces a potential business crisis because of last summer’s drought.

“Drought was bad for planting new trees,” Prince said. “We are going to ramp up the planting by 30 percent to make up our loss from the drought.”

He said the loss is hard to measure. “We will only see the loss in eight to nine years because we probably won’t have enough trees at that time.”

“The real impact is not about this year’s trees,” said Bert Cregg, a Michigan State University horticulture professor.

He said Christmas trees need eight to ten years to grow to marketable size so the impact will not appear at least until them.

Michigan has 700 Christmas tree growers, according to the Department of Agriculture and Rural Development.
The annual wholesale value is about $40 million per year.

The industry brings benefits to the state’s economy in several aspects.

“We now have over 600 growers in the state,” Gray said. “The biggest growing counties are Missaukee, Macomb and Muskegon.

“We are a hot spot in the Christmas tree-growing industry,” she said.

Gray said one possible reason is the state’s physical environment, like its soil and climate.

“Based on natural resources, we are able to grow eight to ten different kinds of trees,” she said. “People in the Northwestern coast and North Carolina can grow only one kind of tree.”

Another reason is the state’s agriculture tradition, she said. “Historically some started growing Christmas trees and someone else followed up.”

Prince’s company is one of many family-owned businesses.

“We are three-generation tree growers,” he said. “My great grandfather started the business and now my children are helping me out and working on the farm.”

Prince’s company sells both wholesale and retail. It ships trees to Texas and Florida and sells to stores in the Grand Rapids area.

Prince said his business is doing better this year, with orders staying the same but with new customers.

He said that’s because fewer people in the state are growing Christmas trees. “Most of them are older guys and lots of 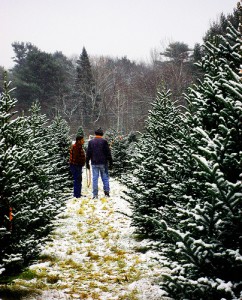 There aren’t as many Christmas tree farmers in the state. Photo: looseends (flickr)

younger generations are doing other work.”

She also said the market is changing.

“Trees don’t change, but consumers are expecting different things,” she added. “Business owners need to provide something different to customers.”

She said the association is developing small Christmas trees so people can put them on a desk. “They are for people who still want a tree but don’t want a big one in the house.”

But Prince said, “We’ve been doing the same things for three generations. I will continue to do what my great grandfather did and my son will do the same thing.”

His 19-year-old son is now a second-year mechanical engineering major, which, according to his father, will “definitely be helpful to the business.”

Prince said he hasn’t made an agreement with his son to work on the farm yet but he will talk to him soon before the youth’s graduation.

“I have told my son if you work hard in this business, you can succeed,” he said.