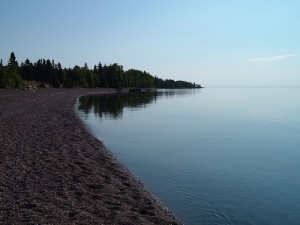 Great Lakes beaches are known for breathtaking vistas and recreational activities that drive the region’s tourism economy, but a growing number of experts are viewing those same beaches as important indicators of ecosystem health.

“Beaches are what connect people to the Great Lakes … beaches can also be indicators of problems,” Davis said.

If that’s the case, what are the more than 1,000 beaches on the U.S. side of the Great Lakes beaches telling us about conditions in one of the world’s largest freshwater ecosystems?

“Our beaches are telling us that the Great Lakes are under enormous stress,” said Joan Rose, the Homer Nowlin Chair in Water Research at Michigan State University.

That was evident this past summer, when bacterial pollution and nuisance algae blooms forced health officials to close 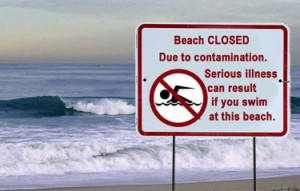 numerous beaches on each of the five Great Lakes. Even Lake Superior, which is known for its clean water, was affected.

Bacterial pollution was so severe at New York’s Ontario Beach Park, in Rochester, that health officials closed the beach for the majority of this past summer.

At Jeorse Park Beach in Gary, Ind., health advisories warning people about the dangers of swimming in the polluted, algae-laden waters of southern Lake Michigan were posted for much of the summer.

“Jeorse Park has one of the dirtiest beaches in the U.S. – it exceeds the E. coli (water quality) standard 75 percent of the time,” said Richard Whitman, a U.S. Geological Survey ecologist and chief of the agency’s Lake Michigan Ecological Research station in Porter, Ind.

E. coli is a bacterium that lives in the gut of warm-blooded animals; it’s an indicator of fecal matter in water.

Experts agree that the Great Lakes are cleaner and healthier than in 1972, when Congress passed the Clean Water Act. But the lakes, which provide drinking water for 30 million people, remain plagued by environmental problems that threaten human health, harm fish and wildlife and hurt the region’s multi-billion dollar tourism economy.

According to government data, in 2012:

On a regional basis, Great Lakes beaches are closed more often by bacterial pollution than beaches in any other region of the United States, according to government data analyzed by the Natural Resources Defense Council.

According to the most recent government data, 11 percent of water samples taken from Great Lakes beaches in 2011 violated health standards for bacterial pollution.

Many sources contribute to bacterial pollution at Great Lakes beaches, but cities with faulty sewer systems are one of the most obvious and chronic sources of water pollution, said Lyman Welch, water quality program director at the Chicago-based Alliance for the Great Lakes.

When rainfall overwhelms combined sewer systems, cities discharge the diluted sewage and stormwater into the nearest waterway to prevent flooding of homes and businesses. U.S. cities discharge more than 18 billion gallons of diluted sewage and stormwater into the Great Lakes each year, according to an Alliance for the Great Lakes study.

“It is vital that we address the sources of bacteria at Great Lakes beaches to protect public health,” Welch said.

But Congress in recent years has made deep budget cuts in the federal program that helps cities pay for sewer upgrades. Congress is now considering eliminating funding for beach monitoring programs, a move that could leave people guessing whether it’s safe to swim at their favorite Great Lakes beach.