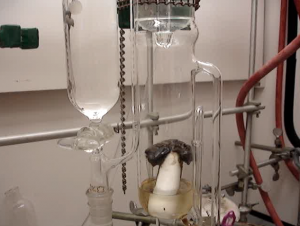 Researchers use a Soxhlet extractor to isolate the repellant from a dead sea lamprey. Hot ethanol is boiled at the bottom until it evaporates, hits the condenser and drips back down. Eventually, the extractor fills and is siphoned off.

If your local river starts to smell like dead sea lamprey, you may be in luck. That smell could be the solution to a long-standing invasive species problem.

Sea lamprey are attracted to the smell of their young and repulsed by the stench of their dead. Those are keys to controlling this troublesome invasive species, said Michael Wagner, the lead researcher on the project.

Sea lamprey are a parasitic fish that attach to larger fish with suction mouths. Their sharp tongues lash their prey and the eel-shaped fish feed on the blood of their victims that often die of blood loss or infections.

Left unchecked, lamprey threatens both the ecosystem and commercial fishing in the Great Lakes.

What makes them easy to manipulate is that they rely on chemical information from pheromones above all other senses, Wagner said.

Lamprey larvae are blind and live in streams for four to six years before growing teeth and heading out into the Great Lakes to suck fish blood. Eventually, they return to reproduce. But unlike salmon, they don’t return to the same stream they were born in. Instead they rely on the smell of lamprey young to guide them.

Adult lampreys die after spawning. The only way they can protect their young is to leave them in a safe area. For this reason, they are attracted to the smell of lamprey young. Any stream with that smell should be a good place for the young to survive.

Usually, lampreys encounter the dead lamprey scent if they swim past a breeding ground that was hit hard during the winter. The larvae freeze, and when spring comes, they defrost and begin decomposing, notifying other lampreys via scent that this particular neighborhood is no longer a good place to raise their young.

And while not a conscious decision, it certainly is a logical adaptation, researchers say.

“They’re choosing neighborhoods based on correlates of success for the other larvae,” Wagner said. “How do your parents pick the neighborhood they want to raise you in?”

As long as there are surviving lamprey larvae, chances are it’s a good place.

Lamprey faced with two streams with a favorable odor will not necessarily choose the one with the stronger smell, Wagner said. Even if the odor is ten times as strong in one direction, the lamprey doesn’t care.

That’s where researchers hope the dead lamprey scent can play a role by blocking off each diverging stream. If they can corral all the lampreys in just a few selected spots, it’s easier to kill them. It’s too costly and labor-intensive to control all potential lamprey habitats.

Lamprey are active primarily at night, so the repellant can be applied easily in a specific time frame.

This is good, Wagner said, because if the repellant was constantly present, lamprey would get used to it and start to ignore it.

These tests, if successful, will bring sea lamprey control closer to what Wagner calls the ideal: a program where sea lamprey can be targeted without damaging the rest of the ecosystem.

Instead of poisoning multiple rivers and potentially harming many species, damage will be dealt almost exclusively to lamprey populations.

The commission spends about $22 million a year on research and lamprey control programs. In fact, if spending could be increased by as much as 40 percent, the commission would still see positive and efficient results, Gaden said.

Controlling invasive species is often a matter of diminishing returns. Eradicating lamprey is very difficult, and the fewer the lamprey the more it costs for each additional fish kill.

But if Wagner’s program is successful, savings could be very high. Using this method on a small stream could save between $50,000 and $100,000 every four years, Gaden said.

In the case of larger rivers, like the Manistique River, savings rise dramatically.

“You’re talking about saving in the neighborhood of half a million to a million dollars every four years,” Gaden said.

Larger rivers will most likely require a combination of methods, including the repellant, traps and a physical barrier, he said.

A sudden drop in lamprey populations will likely not affect native fish, since lamprey populations are already down 90 percent of their historical high point in the 1930s, when they crashed commercial fisheries, Wagner said. Despite their lowered numbers, they continue to cause damage.

“The goal of the program is to get that damage down to the point where economic and ecological harm is minimalized,” he said.

The tests will be done on three Michigan spawning streams, though the locations have yet to be chosen, Wagner said.