The only federally-protected underwater sanctuary on the Great Lakes could increase 10-fold to more than 4,000 square miles.

Thunder Bay National Marine Sanctuary in Lake Huron could expand from its current 448 square miles after an environmental study by the National Oceanic and Atmospheric Administration’s Office of National Marine Sanctuaries. The expansion includes waters adjacent to Alcona and Presque Isle counties in the northeast of Michigan’s Lower Peninsula.

The sanctuary receives about 70,000 visitors a year. It was established in 2000 and is managed by federal and state officials.

In 2007, sanctuary advisers adopted a resolution supporting the expanded boundaries, but recent tries at getting Congressional approval came up short.

Now the 30-person council will decide, after public comment, if it will continue to recommend it.

“We can get this thing done our way and hopefully it can get through,” said Steve Kroll, a member of the advisory board and an Alpena dive shop owner. 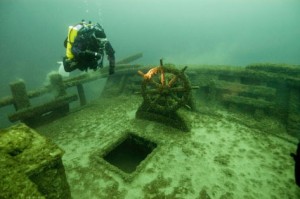 This wreck site is the two-masted schooner F.T. Barney, which was built in 1850 and sank in 1874, and lies approximately four miles off Rogers City, Michigan. Photo courtesy of NOAA.gov.

The sanctuary preserves nationally significant shipwrecks and other maritime heritage resources through protection, education and research. It is one of 14 U.S. marine sanctuaries that offer educational programs and scuba diving opportunities. Vessels can pass through it without restriction.

The proposed expansion includes an estimated 200 shipwrecks and would connect the underwater sanctuary from Michigan to the shores of Canada. No public funds are allotted as part of the approval.

“Very positive support has been received from the public comment sessions and many of the local governments have passed resolutions supporting the expansion,” said Jeff Gary, the sanctuary’s superintendent.

Michigan Gov. Rick Snyder, various state senators and officials of adjacent cities have written letters of support. So has the Alpena Area Chamber of Commerce.

“The impacts of a boundary expansion fit directly into the chamber’s mission advancing the economic development and community’s quality of life…,” wrote Jackie Krawczak, executive director of the chamber. 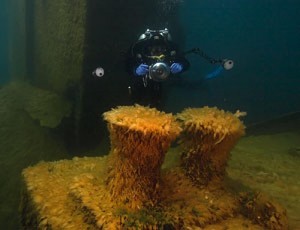 Kroll, a sanctuary volunteer and previous advisory committee chair, owns Great Lakes Diving, an Alpena scuba diving shop. He also operates a dive charter service company. He previously opposed the expansion because he thought it was too big to manage. But he has since changed his position and testified to Congress twice in support of it.

“I think the sanctuary has shown what it can do for the area and the asset that it is for the area,” Kroll said. “Not only do I want its boundaries to expand, but expand in terms of what it has to offer.”

He will soon open a new dive shop just across the street from the sanctuary’s Alpena entrance.

Gary says tourism brought by the expansion will enhance the local economy.

“We are hearing how the work we do is supporting to learn more about the use of the Great Lakes and its history to help bring on the tourism to this area which is a spectacular area with wonderful natural resources,” he said.

The public comment session ends Friday. Comments can be submitted to Jeff Gray at jeff.gray@noaa.gov or mailed to him at 500 West Fletcher St., Alpena, Mich., 49707.

The committee hopes to have the report completed over the summer.

To see the full gallery of photos taken by the National Oceanic and Atmospheric Association at Thunder Bay, click here.