LANSING — Environmental experts are urging Michigan property owners to get rid of lakefront lawns and stone breakwalls in favor of a new approach to landscaping.

Lakescaping is a way to control shoreline erosion by moving inland lakes to a more natural state.

According to the Michigan Department of Environmental Quality, replacing traditional sod lakefronts with native plants can also combat invasive species, improve wildlife habitats and save property owners money on upkeep.

“When dealing with lakes, it’s important to have as minimal an impact as possible,” said John Skubinna of the Department of Environmental Quality’s water resources division. 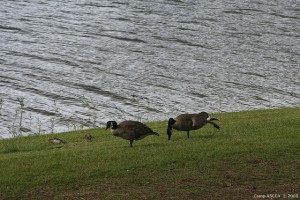 While property owners may be reluctant to obstruct lake views with tall vegetation, protecting lakes should trump aesthetic concerns, said Skubinna. “By just keeping conditions as nature intended, a lot of problems can be avoided.”

Erosion is chief among these problems, Skubinna said.

“Well-manicured turf lawns with their shallow roots don’t do a good job of keeping people’s yards from spilling into the lake. Long-rooted native species do a better job.”

Constructed erosion deterrents like breakwalls and heaps of rock called riprap are effective at preventing erosion but can also deflect waves elsewhere.

“You can build a breakwall but your neighbor better have one too,” said Jane Herbert, a senior water resource educator at the Kalamazoo County Michigan State University Extension.

“Eventually, all these walls turn lakes into bathtubs,” Herbert said. “Waves just bounce off them and can scour the bottom of lakes, which causes problems for fish habitats.”

Skubinna said shoreline plants do a better job of absorbing and dissipating energy from waves and rain.

Another threat to a lake’s health is runoff. Pesticides and fertilizers used by homeowners to maintain their lawns and gardens eventually wind up in lakes, where they can do severe damage to the ecosystem.

“Nitrogen and phosphorous from runoff cause large algae blooms,” Herbert said. “When that happens, it negatively affects oxygen levels, which will devastate fisheries.”

Skubinna said a buffer zone of long-rooted native plants keeps tainted sediment out of the water and dangerous chemicals out of lakes.

Lakescaping can also help combat the spread of invasive and nuisance species.

“The water serves as a conduit for the spread of invasive vegetation,” Herbert said. “If a homeowner encouraged the growth of native species, it would certainly keep invasive aquatic vegetation like reed canary grass, purple loosestrife and phragmites from gaining a foothold.”

While natural vegetation makes a stout barrier against invaders, it can give a leg up to welcome species. For example, frogs and turtles looking for a change of scenery can’t climb walls of rock and riprap but a natural, gradual slope makes land more accessible for them.

“It really is critical to so many parts of the ecosystem to keep lakeshores as undisturbed and natural as possible,” Skubinna said. “You can see a difference in the amount of biodiversity in a healthy lake versus one where humans have had an impact.”

According to the Environmental Protection Agency, installing turfgrass costs more than $12,000 per acre while restoring a lakeshore with native plants costs only $2,500 per acre.

After two to three years of growth, natural lakeshores require virtually no maintenance.

Interest in lakescaping is growing, said Herbert, with major public projects recently completed at Milford’s Kensington Metropark and Cadillac’s Lakefront Park. A major project at Grose Park in Chester Township will be installed in July.

“There have been a lot of contractors and landscapers looking to learn how to do this,” Herbert said. “We’ve trained over 100 contractors from all over the state and about 45-50 more are going to be trained soon.”

One of those contractors is Ron Niewoonder of Kalamazoo. He said his landscaping business, E. Niewoonder and Sons, is seeing interest from customers.

His company is working on two lakescaping projects on Indian Lake in Vicksburg and West Lake in Portage.