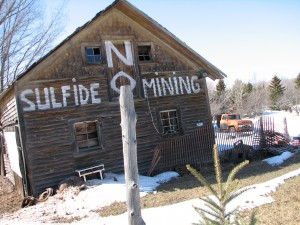 LANSING — The Eagle Project mine in Michigan’s Upper Peninsula is facing opposition from the local Native American community which says the mine is being blasted directly into a sacred site.

Local tribes and environmental organizations, including the Keewenaw Bay Indian Community and the National Wildlife Federation, are challenging the project in court. They claim the operation threatens Eagle Rock, a sacred site for Anishinaabe people, according to Jessica Koski, the mining technical assistant for the community.

“Sacred sites like Eagle Rock were usually used for fasting and for vision quests. They are isolated, usually higher places and a distinct landscape feature,” Koski said.

But Daniel Blondeau, communications and media relations advisor for the Eagle Mine, said the mining company is working to understand and respect the tribe’s religious claims.

“We remain committed to establishing a constructive relationship with the Keewenaw Bay Indian Community, aimed at strengthening our understanding of the tribe’s interests and working to resolve issues that benefit all,” Blondeau said.

The Keweenaw Bay community and the National Wildlife Federation brought the lawsuit against both Kennecott Eagle Minerals Co. and the Department of Environmental Quality.

The project lost the first round. However on reconsideration, an Ingham County judge ruled that Eagle Rock is not a religious site because there was no permanent structure built there.

The case is pending in the Court of Appeals.

Blondeau said the company is working with the Keewenaw Bay community to provide members safe access to the “rock outcrop.”

But Koski of the Keewenaw Bay community said that’s not true and Eagle Mine has limited access to the site.

“During the summer of 2010, some tribe members started a camp at Eagle Rock and they were conducting ceremonies there,” she said. “A lot of people came out to do teachings and ceremonies, but two tribal members were arrested by state police, and then the company put up fences around the whole site.”

According to Blondeau the company is required by its mining permit to put a fence around its mine. Currently there is a fence around the “rock outcrop” but he said that Eagle Rock is still accessible.

Blondeau said Kennecott’s lease from the state requires it to protect the integrity of the surface rock and prohibits mining activities on the rock.

Koski said, “It is a complicated situation in Michigan. The state has all the authority to permit mining activities and, ideally, the federal government is supposed to be upholding treaty obligations. The federal government and the Environmental Protection Agency have delegated more programs to the state, and it is not really the state’s responsibility to protect our treaty rights.”

MSU’s Fletcher said, “The feds don’t typically sue for treaty rights unless the issue is much more directly tied to the treaty rights then in this case. My understanding of the 1843 treaty is that it doesn’t say anything about sacred sites, but it is obviously implied.”

Koski said the tribe’s right to Eagle Rock should be protected based on a treaty from 1843 which gives the tribes the right to occupy and hunt on the land.

Fletcher said, “If the tribal interests win, it will be virtually unprecedented. My suspicion is that this isn’t going to go anywhere. It is probably a strong case, but the law is rabidly anti-tribal.”

He said focusing on significant environmental questions surrounding the mine would make a stronger legal case than a sacred site argument because courts are more receptive to environmental issues.

He said even though the Keewenaw Bay community will most likely lose the appeal, there are other ways to combat the mining operation by working with state government.

“You might not be able to stop the mine, but you can force the mining company to have more and more protections for the environment that almost make the mine economically not viable anymore,” Fletcher said.