Is there a Great Lake that is best? Maybe. ­­

That’s certainly fodder for partisan bickering. But perhaps each lake should be recognized for the best of something.

So tell us. What is the single best thing to do on each of the Great Lakes?

A few of my ideas: 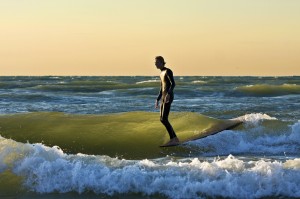 Why: Any Great Lake can be surfed but Lake Michigan is considered most consistent, a great characteristic for surfing, according to Ryan Gerard, owner of Third Coast Surf Shop in St. Joseph, Michigan.

“In terms of consistency and quality, I would say Lake Michigan is best,” said Gerard. “In general, you get more surfing days.”

But Gerard noted that if wave height is a priority, Lake Superior is the way to go, “Lake Superior is deep and a bigger body of water which creates better waves and quality, which is great for surfing.”

When the Edmund Fitzgerald went down off Lake Superior’s Whitefish Point in 1975, waves were 30 feet high.

Why: All the lakes have adequate fishing but Lake Erie is the most productive, according to the Great Lakes Science Center. Yellow perch and walleye are some of the top fish caught in Lake Erie.

Why:  Lake Huron has the most coastline (not that I recommend canoeing 3,827 miles). Canoeing in Lake Huron gives a traveler the unique opportunity to see Michigan’s thumbnail, located near Port Austin and Pointe Aux Barques, about 16 miles from Port Hope.

Why: Lots of sand. Need proof? In 2011, Sleeping Bear Dunes won most beautiful place in the United States, competing against places like Hawaii and California, according to ABC’s Good Morning America. 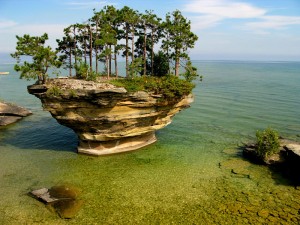 Why: Turnip Rock is less than 100 feet off of Port Austin, Mich. (at the tip of the thumb). Googling the images were enough to make me want to go. Turnip Rock is a large rock island thousands of years in the making. Intense storm waves created the turnip shape that has kayakers looking up in amazement. Man-made cement supports the bottom so the land that appears unbalanced stands strong above travelers.

Why: Not an easy decision but if I can only pick one I’m going with Lake Ontario because of beautiful features at opposite ends: Niagara Falls on the west and the 1000 Islands on the east. The 1000 Islands straddle the Canada-U.S. border and are made up of more than 1,800 islands. Only some of the islands are large enough to be occupied by residents but all are known for their autumn beauty, according to the 1000 Islands website. Niagara Falls, located on the opposite end of Lake Ontario, has about 700,000 gallons per second of water flowing over the falls during the peak periods, summer and fall. Niagara Falls also has over 13 million visitors a year.

The list is far from definitive and certainly fodder for argument.  You tell us. What is the best lake for ice fishing, sailing, sunsets, swimming or any other Great Lake activity?

In the comments below, you might fill in these blanks: