The research has not yet been published or peer-reviewed, said David Janetski, post doctoral researcher with Grand Valley State University’s Annis Water Resources Institute and lead scientist on the project. But preliminary data show that fish in stream sections open to migrating salmon are generally more contaminated with toxic PCBs than those in sections of the same river system where salmon are blocked by barriers like dams. 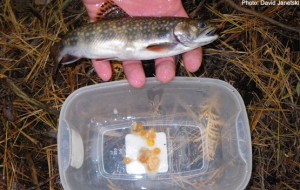 Researchers on Pine Creek, a Manistee River tributary, found brook trout gorging on salmon eggs had high levels of PCBs, especially compared with trout in a nearby stream closed off to salmon. Photo: David Janetski

Though PCBs were banned in the 1970s, the chemicals still accumulate in the flesh of Great Lakes fish like salmon and steelhead. When the migrating fish spawn in the lakes’ tributaries, stream-dwelling fish eat their contaminated eggs.

The issue isn’t news to fisheries managers, but the findings highlight the complexity of dam removal projects, especially if a dam is the only barrier between contaminated Great Lakes salmon or steelhead and the rest of a river.

“If you remove one of these dams, these contaminated salmon are going to move upstream and transport contaminants into what were isolated habitats,” Janetski said. “It’s kind of this weird twist that a man-made structure might actually be sort of protecting these pristine environments upstream in some cases.”

That could be the case on the Boardman River, where the largest dam removal project in state history could open up the river to Lake Michigan steelhead. Four dams will be removed or modified, including the dam at Union Street, which is closest to the mouth of the river and now blocks fish passage.

Whether steelhead will be allowed to pass Union Street is far from settled and will ultimately depend on upcoming scientific assessments and calls for public input, according to Rick Westerhof, fish biologist with the U.S. Fish and Wildlife Service and member of the team coordinating the Boardman project.

The need to keep out invasive species like sea lamprey will also factor into the decision, as will the project’s overarching goal of reconnecting habitats within the river and the Great Lakes, Westerhof said.

“There are going to be positive impacts on a wide range of animal and plant species,” he said. “Of course, that has to be weighed with the impacts of which species you’re passing and also looking at the contaminant burdens in those fish.”

The project, which was Janetksi’s doctoral dissertation at Notre Dame University, also includes a method for resource managers to estimate the how much contamination salmon could bring into a previously isolated stretch in the event of a dam removal.

While previous research has looked at the issue in individual streams, this project takes a more wide-ranging look at the problem in Great Lakes watersheds. The researchers tested fish in 15 Great Lakes tributaries in Michigan, Wisconsin, Indiana and Ontario. Contamination levels were highest in Lake Michigan tributaries, followed by Lake Huron and then Lake Superior.

The most extreme case showed fish in Pine Creek, a Manistee River tributary with a heavy salmon run, were 60-times more contaminated with PCBs than those in a nearby salmon-free stream.

“So that was…I guess alarming is the right word,” Janetski said.

It’s alarming because the PCB concentration they found in the sample fish, which included brook trout, were potentially high enough to earn them a spot on the state’s list of fish consumption advisories–a list stream fish rarely make.

The method Janetski used to measure contaminants differs slightly from the state’s method when issuing advisories on eating fish, so it’s not immediately clear whether these trout would qualify for a warning or how strict it would be.

But the data, when published, could encourage the state to make a higher priority of testing trout in streams with salmon runs, according to Joseph Bohr, an aquatic biologist with the Michigan Department of Environmental Quality who runs the state’s fish contaminant monitoring program.

State biologists haven’t previously tested contamination in the Lower Manistee’s brook trout, but the state is well aware of the potential for salmon to move toxic substances into rivers, Bohr said. High PCB levels have led to consumption advisories on brown trout and suckers from the Pere Marquette River despite no known sources of PCB pollution there.

“Our guess is that the PCBs were brought up by salmon,” he said. “And steelhead, for that matter. But salmon probably more than anything else.”