Successful hunters in Indiana have a chance to share the bounty thanks to the Indiana Department of Natural Resources’ GiveIN Game program. 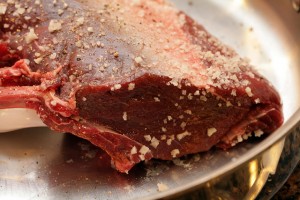 GiveIN Game is one of several game donation programs in the Great Lakes region. Others, like Michigan Sportsmen Against Hunger, Hunt for the Hungry and Farmers and Hunters Feeding the Hungry, raise money to process deer that hunters donate to local food banks and shelters.

“Usually once [hunters] get one deer in their freezer that’s enough to feed their families for a good amount of time,” said Dean Hall, president of Michigan Sportsmen Against Hunger.

Michigan Sportsmen Against Hunger works with over 50 processing facilities in Michigan. When hunters have deer processed in one of those facilities, they can donate some or all the meat.

“A lot of the venison they get donated to their facility goes right back into their community,” Hall said.

The program usually receives between 25,000 and 30,000 pounds of venison per year, plus cash donations to pay processors, Hall said.

This deer season has been a slow one, according to Barbara Haveman of Barb’s Deer Processing in Alpine, Mich. Haveman works with Michigan Sportsmen Against Hunger to process donated deer.

“We’re way down on our deer count but a lot of sportsmen have donated,” Haveman said. “It’s a wonderful thing. To help people is a great feeling.”

Indiana’s GiveIN Game program is in need of more venison. Stewart said of the 600 people registered, most were seeking venison.

“We’re looking for more people who are willing to offer it up,” Stewart said.

Instead of donating to shelters, Indiana’s GiveIN Game connects hunters directly with people looking for venison. That way, the program doesn’t have to work with certain processors or worry about licensing.

“We hope to get hunters active in their community to donate venison, the fruits of their labor in the hunting season,” Stewart said.

People ask for venison for many reasons, Stewart said. Some are hunters who had an unlucky season, some have never tried venison before, some want local, antibiotic-free meat and some need food assistance.

“What we really want is to get back to the roots of hunting, where deer are feeding the community,” Stewart said. “These animals are abundant and certainly healthy and delicious to consume, so to spread that wealth is a benefit to everybody.”

2 thoughts on “Hunters donate game to the hungry”