LANSING- Michigan residents are paying less for yearly passes to state parks but the program has generated more funds than in prior years.

Michigan Recreation Passports, available at the Secretary of State for the past year, now allow almost 2 million vehicles access to all Michigan state parks. More passports were sold in 2011 than motor vehicle permits in 2010.

When residents renew the registration on their vehicles, they are asked if they would like to purchase a Recreation Passport for $10. The passport allows access to any state park or boat launch without an additional fee. 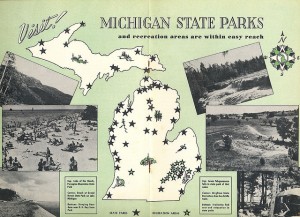 “It is a way for us to try to broaden the basis support of state parks” said Mary Dettloff, media contact at the Department of Natural Resources. “State parks don’t get any general fund money. They haven’t for the last ten years.”

The previous system was a window sticker, or motor vehicle permit, that was purchased at the entrance of the state park, and cost residents $24 for a yearly pass.

The program has now raised $18.8 million and has paid for improvements to many state parks, according to the Department of Natural Resources. More money has been raised even though the cost is drastically cheaper.

Under the old window sticker system, $11.7 million was raised in 2010, according to Dettloff. The Recreation Passport has contributed $7.1 million more than the previous system.

“Hopefully more people will purchase the recreation passport, even if they don’t go to a state park, but they still want to support the fact that we have a great state park system that brings a lot of tourism to the state,” Dettloff said.

With the passport system available at the Secretary of State, the process has eased for many drivers.

“The big thing is it has made it available to more residents in the state,” said Dan Mullen, Cadillac district supervisor for the parks and recreation division at the DNR. “The lower cost has increased attendance state-wide. I think the Rec Passport has really encouraged people to get outdoors and enjoy Michigan state parks and boating access sites.”

Currently 24.7 percent of eligible vehicles are registered in the program, according to Dettloff. The DNR hopes to improve that participation rate to 30 percent for the 2012 fiscal year.

An increase in participation will generate even more funds for state parks in the future.

“It is going to provide funding for generations to come,” Mullen said. “We are anticipating up to $20 million in capital outlay projects. We are going to be able to finally to address some of the major infrastructure repairs.”

Montana is the only other state with a similar program in place that does not require an entrance fee at state park gates, it is added in with their vehicle registration. Montana residents pay a $4 dollar fee in addition to their registration to enjoy state parks and recreation areas, but can opt out if they will not use the recreation areas.

“We were definitely up this year in numbers, and gas was a dollar more, I would say yes (it did drive traffic),” said Blake Gingrich, park and recreation supervisor at P.H. Hoeft State Park in Rogers City.

The passport encouraged residents to explore state parks but also saved them money because they did not have to purchase multiple passes for their vehicle and their boat, Gingrich said.

The Department of Natural Resources has built relationships with 700 Michigan businesses that are offering discounts to consumers that have purchased the recreation passport. The program, Passport Perks, is another added incentive of purchasing a Recreation Passport. The discount program is currently available to all vehicle owners with a passport.

Michigan residents have had a positive impact on the tough economy by traveling the state and visiting many state parks across Michigan.

“State park visitors generate $650 million dollars in economic impact annually to the state of Michigan,” Dettloff said. “This is a good way to invest in the tourism economy in Michigan, by supporting the recreation passport.”