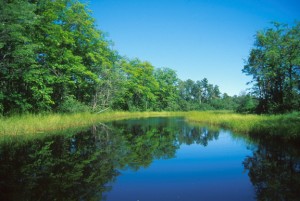 Next up: Wisconsin, which is holding hearings on similar procedures next Wednesday.

A 2008 agreement among the Great Lakes states requires all states to establish water use reporting and permitting procedures.

New York packaged its permitting plan in a Water Resources Protection Act passed Thursday by the New York State Senate and in May by the Assembly. The bill awaits action from the governor.

Only a few Great Lakes states have permitting procedures in place.

Minnesota’s preexisting program – likely to be the most stringent in the region – is sufficient under Great Lakes Compact provisions. And two years ago Michigan phased in an online tool that makes it easier to grant permits by screening out bad water requests.

States like Wisconsin are still working out the kinks. Breweries, power companies, paper mills and other Wisconsin heavy water users have one last chance to put their two cents in on water permitting rules next week.

Like New York, the new rules would require Wisconsin public water systems, high capacity well owners and certain businesses and individuals to apply for a state permit to withdraw 100,000 or more gallons of water per day in any 30-day period. 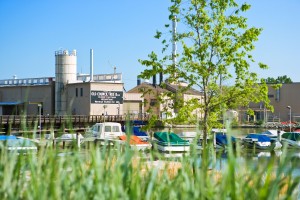 New water use permitting rules would impact water-intensive businesses such as paper mills, like the Neenah Paper Mill in Wisconsin.Photo courtesy OppGreen Insights

The Wisconsin Paper Council, which represents approximately 30 of the state’s mills, has sought clarification of some of the requirements.

“We‘re not far in the implementation of this,” he said.

The rules only apply to new or increased requests. Wisconsin users who started withdrawing any water before December 2008 would automatically receive state permits lasting 25 years.

For 10-year permits exceeding 1 million gallons of water per day, requests must meet state standards, including demonstrating a need for the water, implementing conservation measures and proving it would not negatively impact the environment.

For requests exceeding 10 million gallons per day, the Great Lakes Compact additionally requires potential users to return the water to the watershed and comply with all local, state and federal laws and agreements.

Provisional regulations in Indiana and Pennsylvania also require permits for requests at 100,000 gallons of water per day – considered the compact default if states were not to establish their own rules.

New York has had to tailor permitting and conservation regulations to water compacts protecting the Great Lakes, Delaware River and Susquehanna River.

“New York has to manage these compacts and watersheds in a way that makes sense for all water users across the state,” he said.

Minnesota sets a low threshold for water withdrawal at 10,000 gallons per day – a tenth of provisional regulations of other Great Lakes states. Graph: Minnesota DNR

Minnesota sets a lower threshold than the compact. Since the early 1980s, waters users there, with the exception of small water systems serving less than 25 people, must apply for a permit to withdraw 10,000 or more gallons per day – a tenth of what most other Great Lakes allow.

Not all states had permitting rules meeting compact standards in place when the agreement passed. Minnesota had to pass a few statues to comply with specific requirements, but the state didn’t have to start from scratch, Eckman said.

In a controversial move, Ohio lawmakers are pushing for a higher threshold at 200,000-400,000 gallons per day, Smith said.

That’s not the best way to manage permits, Smith said. He favors a system in Michigan uses an online screening tool that red-flags withdrawals that would have a negative impact on the environment.

“We want science to tell us what we can take. Industry groups want a magic number thrown out of a hat,” he said. “That’s not the way to manage the Great Lakes.”