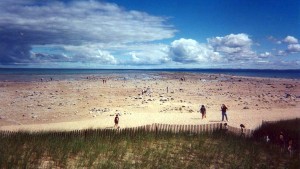 The Milwaukee Journal Sentinel has for more than a year reported on the controversy surrounding a binational study on the cause of low water levels on lakes Michigan and Huron:

Not surprisingly, the Journal Sentinel found it controversial.

I wrote about the study board’s post for Echo. The biggest point of dispute is the post’s headline, “Lake Michiganders Don’t Want to See Water Levels Raised.”

That sentiment conflicts with the majority of people attending a public hearing on the issue held in Wisconsin back in March 2010. They actually wanted the study board to look into adjusting lake levels, according to this report from the Journal Sentinel.

The study board’s headline makes it sound like the entire Lake Michigan community had formed a consensus on leaving the lake’s level alone, a conclusion that obviously can’t be drawn from 20 letters from property owners on the lake’s east shore.

But there’s also a problem with the Journal Sentinel’s headline: “Article says low levels on Lakes Michigan, Huron are a nonissue.”

Headline aside, the study board article treats Great Lakes levels not as a nonissue but a complicated one that needs a diversity of public input:

“While some Georgian Bay residents believe it’s worth looking at structures and other ways of restoring water levels to those in the 1960s and earlier, some Lake Michigan folks have an opposite view. After all, regulating Great Lakes levels is a balancing act, and changes made to one part of the system, like the St. Clair River, would have positive and negative consequences throughout the basin.”

If I was trying to paint a controversy as a nonissue, phrases like “opposite view” and ”positive and negative consequences” wouldn’t be on my palette.

The Journal Sentinel also says article author Jeff Kart’s ties to the study board are “questioned.” That’s supported by quotes from National Wildlife Federation’s Melinda Koslow, who said she initially had trouble distinguishing the study board article from straight-up news.

So what’s to question?

Maybe this: For months, the Journal Sentinel published articles that rightly criticized as debate-limiting the location and timing of official public hearings on the lake level study. The meetings were held in cities far from most Wisconsin residents and took place before all of the information was available.

But now the U.S. and Canadian governments are using the Internet and social media in a novel (by government standards) attempt to spur public engagement and input. Kart’s article is part of that. Rather than recognize that, the Journal Sentinel uses the article’s admittedly artless headline to spin up controversy over a nonissue.