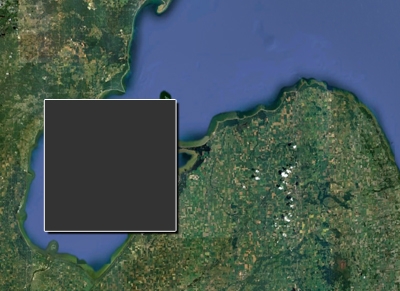 It also contributes to one of the biggest threats to Great Lakes water quality: Urban runoff.

The researchers measured parking lot cover in aerial photographs of 30 randomly selected ZIP codes in Illinois, Indiana, Wisconsin and Michigan. They then scaled those measurements up for statewide estimates, which were published in the May issue of the journal Landscape and Urban Planning.

They also estimate that around 45 million parking spaces account for 5 percent of the region’s urban areas. That doesn’t even include the pavement taken up by streets and driveways.

If it did, that would likely mean that there are three parking spaces for every registered vehicle in the four states, said Amelie Davis, co-author of the study.

That’s too many, she said.

“It’s like playing musical chairs, but there are two extra chairs per person in the room, which is ridiculous,” said Davis, who has moved on to a post-doctoral fellowship at Furman University in South Carolina since working on the study.

She’s not the only one who thinks so.

“It’s a good indicator of how absurdly wrong we’ve gotten our development patterns in the past 50 years,” said Steve Hiniker, executive director of 1000 Friends of Wisconsin, a non-profit advocacy group focusing on urban land use.

Those development patterns include rules that require a minimum number of parking spaces to accompany new development but rarely limit the maximum number. That can lead to sprawling lots that sit mostly empty except on the busiest days of the year.

Great Lakes cities not so walkable;
rate your own community with this widget

And too much pavement can stress nearby streams.

Parking lots can soup up stream-bound rainwater with pollutants like oil and polycyclic aromatic hydrocarbons, or PAHs, according to another Purdue parking lot study. Some pavement sealants have high levels of PAHs, which are a group of chemicals toxic to aquatic life. Some may also cause cancer in people.

“Thermal pollution” is another problem, said Davis. Parking lot runoff that is warmer than the stream it flows into could cause trouble for cold-water species of fish and insects.

One way to curb growth is with zoning rules that remove minimums and add maximums on parking lot sizes, said Hiniker. That’s already happening in some Wisconsin cities.

But an even better solution would be communities designed with walkability and mass transit in mind, he said.

Americans tend to shy away from that plan, and instead stick to driving and parking as a matter of habit, he said.

“Sometimes I hear people who don’t like transit talking about, ‘Oh, those empty buses. It just drives me crazy.’” he said. “Well, how about these empty parking spots? That drives me crazy.”