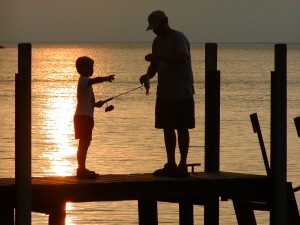 Bob Barnes doesn’t worry about contaminants when he sends a line into his favorite fishing hole.  In the early morning the walleye come in droves to pick off schooling bait fish where the South Channel dumps into Lake St. Clair.

Barnes, an engineer from Sterling Heights, Mich., and vice president of the Lake St. Clair Walleye Association, knows the lake’s history.  He knows about the mercury and PCBs.  He knows he’s supposed to limit the number of fish he eats.

He just doesn’t much care.

Methyl mercury inhibits brain development.  PCBs can suppress the immune system and thyroid development.   They may also cause cancer.  But Barnes doesn’t think about that.  He thinks about the fish.

But the fishery has a murky past.

In 1970, the Canadian government banned commercial fishing in Lake St. Clair.  Chemical plants and petroleum refineries on the St. Clair River had released so much mercury into the water that the fish were unsafe to eat.  When the fishery reopened 10 years later, officials retained warnings against eating mercury-contaminated fish.

That’s not going to change any time soon, according to a recent study.

Mercury and PCB levels in fish dropped dramatically between the 1970s and 1990s, but they leveled off in the past decade, said Sarah Gewurtz, a postdoctoral fellow in the department of ecology and evolutionary biology at the University of Toronto.  Gewurtz was part of a research team that mined data collected by the Ontario Ministry of the Environment.  Since the 1970s, the Ontario government has been collecting fish contamination data to help decide what to tell people about eating fish.

But now the contaminants are coming from the sediment itself, Gewurtz said. The contaminated lake bottom is the legacy of decades of pollution, she said.  And it’s not going away any time soon.  “Unless the whole system is dredged, which is not feasible, it can be hypothesized that the sediment will continue to be a source to the fish,” she said.

Enough mercury and PCBs are released from the sediment to limit fish consumption for the foreseeable future, Gewurtz said.

That includes mercury-based advisories for two of the lake’s most popular sport fish: walleye and yellow perch.  PCBs are a concern in carp, but studies show that St. Clair area anglers aren’t much interested in catching them.

Both contaminants build up in fish over time — mercury in the muscle and PCBs in the fat.  Older fish and fish higher up the food chain are the most contaminated.

The United States and Canadian governments recommend children under the age of 15 and women of child-bearing age restrict themselves to small fish, and then only eat the popular sport fish one to four times each month.  The general population can eat more fish, but should still avoid large ones.

While PCBs slowly degrade, mercury stays in the system until it is covered by a new layer of sediment — hardly a quick process.  “It could certainly be on the order of decades,” said Alexis Cain, an environmental specialist with the U.S. Environmental Protection Agency Region 5 office.

Still, Cain said, the area is improving, even if the fish suggest otherwise. “We’re confident that putting less mercury into the system is a good thing and eventually will result in declined concentrations in fish,” he said. “The way mercury circulates in the environment, even if releases go down, it may not show up in the fish.”

And while natural sedimentation takes care of the lake bottom, additional  dredging is planned to clean up three more areas on the St. Clair River.  “We expect that once these areas are remediated this will further reduce available contaminants and contribute to reducing fish contamination,”  Claude Lafrance wrote in an e-mail.  Lafrance coordinates the cleanup of the St. Clair River for Ontario.  Plans for managing those areas are underway and any remediation will begin in 2011, he said.

“Maybe I’ve lulled myself into a false sense of security, but I believe it to be safe,” he said.  Barnes usually eats fish at least once a week, but he trims fat from his catch and generally sticks to small and mid-size fish to limit risk of contaminant exposure.  It’s enough, he figures, to keep him safe in the pastime he loves.