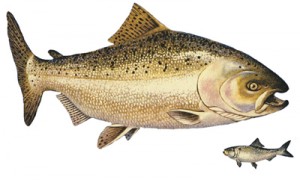 Too many Lake Ontario Chinook salmon threaten the survival of the alewives they eat. Photo: GLERL

(UPDATE: Michael Connerton, co-author of the research written about here, responded by email Monday to points he thought were omitted or exaggerated. Specific criticisms have been added in italics below. See more discussion of this article at Lake Ontario United.)

A biological balancing act between the premier Great Lakes sportfish and its prey could be at a tipping point in Lake Ontario.

Chinook salmon are the foundation of the Lake Ontario recreational fishery, which is worth $76 million to New York alone. But new research shows that the popular predators could be so abundant in the lake that there may not be enough alewives — the Chinook’s main prey fish — to go around.

If there aren’t enough alewives to both reproduce and feed the salmon, each species will collapse. That’s what happened over the past five years in Lake Huron, where alewives and the Chinook salmon fishery have all but disappeared.

“The alewife population could be at severe risk of collapse like what happened at Lake Huron,” said Brent Murry, a biology research assistant professor at Central Michigan University who did doctoral research on Lake Ontario. “We need to reevaluate the stocking plan.”

(Connerton: “Age-3 Chinook salmon in Lake Ontario average about 5 lbs heavier than salmon in Lake Michigan and are almost double the size of Lake Huron’s right now, so the lakes are really quite different and difficult to compare directly”)

In 2006, Lake Michigan managers fearing the same fate as Lake Huron cut back Chinook salmon stocking by 25 percent, hoping to make life easier for alewives. So far, that strategy has worked, said Randy Claramunt, research biologist with the Michigan Department of Natural Resources and Environment.

“Reducing stocking has contributed to a reduced number of Chinook salmon in Lake Michigan,” he said. “Likewise, we’ve seen a response in the increased survival of alewife.”

And the salmon that remain are bigger and healthier than they were a few years ago, he said.

A similar salmon stocking cut could ease the pressure on Lake Ontario alewives, Murry said. But such a move is unpopular with the lake’s recreational anglers.

“Part of our livelihood is the number of fish that are available to us,” he said. “Are you going to do a charter if all you’re going to do is go around on a boat ride?”

(Connerton: “Contrary to Watkin’s story in Ontario, anglers in New York have experienced the highest catch rates of salmon over the past seven years according to results from our Fishing Boat Survey (PDF) conducted annually since 1985.”)

But there may be reason to believe that a stocking cut might not be so bad for anglers looking to hook a Chinook.

The link between salmon stocking and catch rates is based on an old assumption that the only salmon in Lake Ontario are the fish that were planted in there, said Michael Connerton, a senior research biologist with the New York State Department of Environmental Conservation.

A 2009 study shows that’s probably not the case.

The study, co-authored by Connerton and Murry, found that the 2.3 million Chinook salmon planted by New York and Ontario annually produce less than half of the Chinook in Lake Ontario.  Most have never seen a hatchery; they were born wild in tributary streams like the Salmon River in north central New York.

“So the widely held belief that there was limited to no natural reproduction is just completely and absolutely wrong,” said Murry.

Around half of the Chinook in Lake Michigan are born wild, Claramunt said. That makes a cut in salmon stocking for the sake of alewives easier to swallow for the lake’s anglers.

In a new study, Connerton and Murry estimated Chinook salmon abundance in Lake Ontario in a way that accounted for natural production. By coupling that estimate with the rate at which the salmon eat alewives, they determined that “predation pressure on the Lake Ontario alewife population may be high enough to raise concerns about long-term stability of this predator—prey system,” according to an article in the January 2010 issue of Transactions of the American Fisheries Society.

(Connerton: “The research by Murry, me and others still leaves a lot of questions that we need answered to really understand what’s going on out there, and how predator-prey conditions in Lake Ontario relate to the Upper Lakes. Lake Ontario is a large and complex system, and our ability to control the outcome through stocking may be less than people think. Weather, new invasive species, natural reproduction, and many other variables factor into the equation in ways we really don’t completely understand yet.”)

The best indicator of the balance between Chinook and alewives is the average size of full-grown salmon, he said. That average was recently near an all-time low, but has since rebounded and stabilized.

“I think what they’ve decided over the past ten years is there doesn’t seem to be enough to indicate a stocking change,” he said.

But it’s something that biologists and managers alike will have to keep an eye on.

“Could we push the alewife population to a point where there’s too few alewife to sustain the population and our Chinook size would drastically decline because there isn’t enough to eat? Yes, of course. I think it could happen,” he said. “Hopefully it won’t happen so quickly that we can’t make adjustments.”