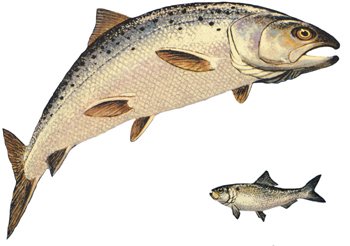 Pacific salmon are an economic draw for the Great Lakes. But they thrive on alewives, an invasive species tough on native fish. Image: Great Lakes Fishery Commission.

Editors note: This is the second of three stories in a series about the challenges of managing non-native fish in the Great Lakes.

Pacific salmon, the big money species in the multi-billion dollar Great Lakes fishery, need a feast of alewives to thrive.

But alewives are an invasive species that harm lake trout, a native fish that biologists have been trying and failing to re-establish for decades.

Lake trout are slow growers and make fine fish food for alewives for a month or two after they hatch, said Charles Madenjian, a fishery biologist with the U.S. Geological Survey’s Great Lakes Science Center.

Size isn’t the only problem. Because they evolved before the alewives invaded the Great Lakes, lake trout don’t know how to dodge an attacking alewife.

“When it comes to avoiding alewife predation, they’re not that bright either,” Madenjian said.

Lake trout also lay eggs in the middle of the lakes where alewives can easily scarf them down. That’s unlike salmon that lay their eggs in streams and rivers to protect their young.

The other way alewives knock down lake trout is that they create a vitamin deficiency that kills newly hatched fish.

Alewife tissues contain a chemical that breaks down thiamine, an important vitamin for the development of young fish and eggs. The chemical can also break down thiamine in fish that eat alewives, like lake trout. When lake trout eat too many alewives, their eggs hatch, but the larvae die.

“There definitely appears to be this strong linkage that everybody’s pretty much in agreement with,” said Jim Dexter, Lake Michigan basin coordinator for the Michigan Department of Natural Resources. “When the thiamine levels get too low because lake trout are eating alewife, that inhibits the reproductive capacity for lake trout.”

Though the reason isn’t clear, the thiamine-busting effect hits some species harder than others. It doesn’t seem to hurt the Great Lakes’ Pacific salmon much at all, Madenjian said.

And while the lake trout aren’t the hardest hit species, they’re hit hard enough, especially when the effect is combined with alewives preying on young lake trout, Ebener said.

“So the alewives, besides eating the larvae of native species, also disrupt the biochemical processes of native lake trout so that lake trout reproduction doesn’t happen,” he said.

And if lake trout aren’t reproducing, then the Great Lakes will remain without their historical top predator. And that isn’t a stable ecosystem, said Jason Stockwell, a fishery biologist formerly with the U.S. Geological Survey’s Lake Superior Biological Station.

Lake trout and other native species evolved in the Great Lakes and are built to take advantage of them, he said.

Lake trout find food in the deep water in the middle of the lakes and the shallow water near shore. That makes them more versatile than salmon, which stick to shallow water. A rehabilitated lake trout population would be less prone to collapse than salmon because the native trout don’t depend on one source of food.

“Native fish rehabilitation would get the system back into its most efficient and stable state,” Stockwell said. “Otherwise, there’s a continual need to keep stocking salmon.”

For many recreational fisherman and state departments whose budgets depend partly on fishing licenses, an unending salmon stocking program wouldn’t be a bad thing.

Great Lakes recreational fishing generates between $4 billion and $8 billion every year, said Dan Thomas, president of the Great Lakes Sports Fishing Council. Most of that comes from salmon fishing.

“Just by the numbers of caught fish that are reported, it could easily be 70, 80 percent,” he said.

Salmon are a more exciting target than lake trout, he said. They swim fast and jump high; a deep-water lake trout sit at the bottom and tugs on the line.

“It’s like drag racing with a Corvette versus a Model T,” Thomas said.

But some anglers still enjoy fishing for lake trout, including Thomas. But if the state agencies abandon salmon stocking to focus on lake trout restoration, revenues from licenses will drop and the states will start shedding employees.

“When your budget is in decline, something has to give,” he said. “It’s all simple economics.”

35 thoughts on “Alewives: The trouble they cause and the salmon that love them”