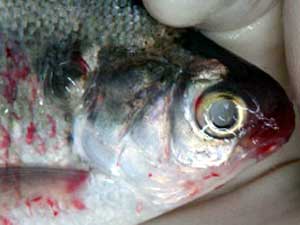 There may be hope for fishery managers still reeling years after a dangerous virus appeared in the Great Lakes.

The month-long wait for a viral hemorrhagic septicemia test has hobbled hatcheries that must test fish before introducing them to the region’s lakes and streams. Genetics researchers at the Lake Erie Research Center at the University of Toledo are working on a test that will speed up that diagnosis to a matter of hours.

The research, supported by the U.S. Department of Agriculture, is one of several projects around the Great Lakes studying a virus that has cost the region tens of millions of dollars in staff time, lost hatchery capacity and research. The tourism and ecosystem impacts are as yet unknown, Marc Gaden, communications director for the Great Lakes Fishery Commission, wrote in an e-mail.

About $1.2 million from various sources has been spent on projects that seek to better understand the virus and develop diagnostic tests, said Gary Whelan, the fish production manager for the Michigan Department of Natural Resources Fisheries Division

The virus was first detected in the Great Lakes in 2005 and 2006 after it killed large numbers of fresh water drum, muskellunge, round gobies and yellow perch. Infected fish bleed from internal organs, muscles and skin. They pass it among themselves in urine and reproductive fluid or by eating an infected fish. The fish typically die from organ failure, but can carry the disease without showing any symptoms, making diagnostic tests imperative. Humans cannot catch the disease.

View VHS Outbreaks in the Great Lakes in a larger map

A faster diagnostic test is good for fisheries managers, who have drastically curtailed their stocking programs in the disease’s aftermath. “It would dramatically change a lot of things that we do,” Whelan said. “Right now we’re taking the very conservative approach …with our fish stocking programs on cool water fish because we don’t have the detection tools in place, and we cannot afford as a state agency to be spreading around VHS to water bodies,” he said. “We’re producing about 20 percent of what we normally do.”

“When the rapid test becomes available … we can potentially go back to full production on our cool water program.”

Fry stocking, the practice of introducing young fish into water bodies, has been particularly hard hit, said Mike Staggs, the Wisconsin Department of Natural Resources Fisheries Bureau director. “In the past we’ve stocked a lot of fish right after they hatch, particularly (after) a winter kill or … chemical treatment. You get those fish in there and there aren’t any predators. But … we have to test them for VHS, and it takes 30 days. By that time they aren’t fry anymore.”

The standard test exposes VHS-susceptible cells to fish tissues, typically from the spleen or kidneys. If the cells die, then investigators do a genetic test to see if VHS is killing the cell line. The positive result is easy – cell death typically occurs quickly, Whelan said. But confirming a negative – that the fish tissues don’t have the virus – can take several trials. “That’s the reason it takes 28 days – the negative takes so long,” he said.

The Great Lakes Genetics Laboratory’s test skips the cell exposures and goes straight to a genetic test, known as standardized reverse transcriptase polymerase chain reaction. It’s different from other genetic tests because “you can actually quantify this virus,” said Lindsey Pierce, a doctoral student in the lab who works on the test. The test also helps decrease false negative and false positive results, she said.

The new test will identify which VHS virus strain a fish has, the amount of virus particles in the fish and whether the virus is actively replicating itself, said Carol Stepien, the Lake Erie Research Center director who is in charge of the project. That information will allow scientists to know if the fish would be contagious. If the virus is inactive, fish can’t spread the disease.

It still must be tested against the cell culture method to ensure its reliability and efficiency before it can be adopted by governmental agencies or the aquaculture industry.

While a faster test may help hatcheries get back on track, a lot of the other VHS-induced changes are here to stay.

“To us it’s just another invasive species issue,” Staggs said. “The kinds of things … we’ve asked anglers and boaters to do: don’t move live fish to other water bodies and drain water when you’re done fishing. Those aren’t real high standards to meet, but they’re things that if everyone did it would really reduce the main risk factors for moving a lot of (aquatic invasive) species.”

Whelan expects to be managing fisheries around VHS for the foreseeable future. “It’s probably going to be part of our background for a long time to come,” he said.